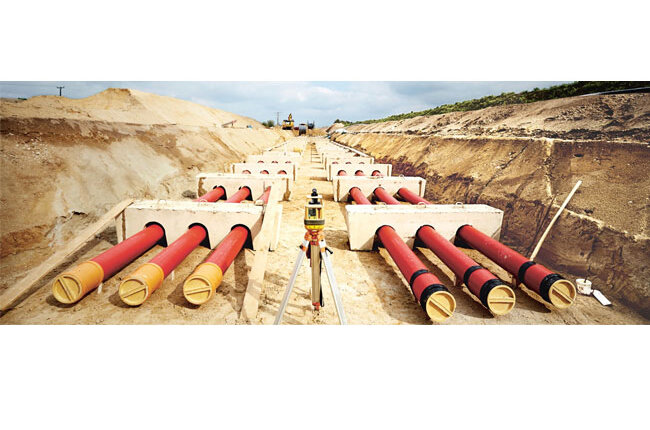 Legislators have given Amprion the go-ahead to plan additional cable protection pipes (empty pipes) for the planned wind power direct current connections in Corridor B.

Amprion will provide information about the planned course of the corridor after the summer holidays – before the approval process begins.

An amendment to the Federal Requirements Plan Act that has now been passed by the Bundestag and Bundesrat has extended the project order for Corridor B: The amendment to the law provides for an additional cable protection pipe in addition to the cable protection pipes that are required anyway for the underground cables System of empty pipes to lay. In the future, this will make it easier to further increase the transport capacity with comparatively little effort.

Corridor B includes two of the most powerful electricity highways (Heide/West – Polsum, Wilhelmshaven – Hamm), which will in future transport energy from the windy North Sea coast to the Ruhr area via underground cable connections.

The project thus makes an important contribution to the goal of climate neutrality in 2045. If necessary, additional direct current underground cables can be pulled into the empty pipes now planned, with which the line capacity of the route can be increased from the current 4 gigawatts (GW) to up to 8 GW can be expanded. For comparison: This corresponds to the electrical output of five (4 GW) or ten (8 GW) large coal-fired power plants.

“The law With Corridor B, which is the first project in Germany, this enables us to put this forward-looking planning approach into practice on site,” explains Dr. Jörn Koch, Head of DC Grid Projects at Amprion. “With this and with the previously presented parallel routing of both underground cable connections on a common trunk line in the middle section, we want to use space as efficiently as possible. We are aware that the question of land use is a particularly important issue in the municipalities,” adds Koch.

In the past few months The Corridor B project team is examining how the variants of possible corridor routes presented in autumn 2021 allow the installation of additional empty pipe systems. Amprion is currently weighing the route corridor options against each other.

In late summer, Amprion will submit an application for federal sectoral planning to the Federal Network Agency, which is the responsible approval authority, and thus start the approval process for Corridor B. Before that, the company informs citizens, politics and administration as well as the media about the corridor route to be proposed as part of federal sectoral planning.

Find information on corridor B on the project website www.korridor-b.net on the Internet. Interested parties also have the option of subscribing to the project newsletter, which provides regular information on process steps and event dates.

The Corridor B DC Project

Corridor B includes the two line construction projects Heide/West – Polsum (No. 48) and Wilhelmshaven – Hamm (No. 49), which have been anchored in the Federal Requirements Plan Act (BBPlG) since 2021. The projects will be implemented using high-voltage direct current technology (HVDC) with a nominal direct voltage of 525 kilovolts. Amprion is planning Corridor B primarily as an underground cable. The transmission capacity is a total of four gigawatts of electrical output (without empty pipe systems).

Amprion GmbH is one of four transmission system operators in Germany. Our 11,000 km high-voltage grid transports electricity in an area from Lower Saxony to the Alps. A third of Germany’s economic output is generated there.

Our lines are the lifeline of society: They secure jobs and quality of life for 29 million people. We keep the grid stable and secure – and pave the way for a climate-friendly energy system by expanding our grid. Around 2,200 employees in Dortmund and at more than 30 other locations help ensure that the lights are always on. In addition, we take on overarching tasks for the interconnected networks in Germany and Europe.