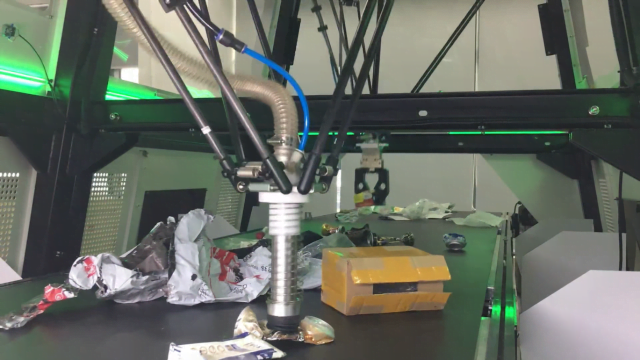 The tireless artificial intelligence garbage sorting robot can accurately classify mixed garbage. The staff train the robot through big data, so that the robot has a judgment similar to that of the human brain, so as to quickly and accurately identify and classify waste, and finally liberate front-line workers from dirty and boring work.

A kind of robot with science fiction color has been actually used in domestic garbage sorting centers, so how does it work?

How does it work? Next, the editor will solve the mystery for everyone.
Robots can work 24 hours a day continuously, twice as efficient as workers.
According to customer requirements, garbage sorting robots can divide waste of different items and materials into more than 20 kinds of recyclables such as PET, HDPE, PP, glass, Lile bags, cans, clothes, shoes, paper, etc. All this waste was originally sorted by workers, but now it can be completely handed over to artificial intelligence.

It is especially worth mentioning that intelligent sorting robots can also sort dense waste paper and other two-dimensional objects on the conveyor belt, and can even pick out impurities such as plastic bags and plastic film in the waste paper, which greatly improves the purity of waste paper.

Robots can sort more than 70 items per minute, about twice as fast as ordinary people. Robots can also work continuously for 7 days * 24 hours. Workers can’t withstand such intensive labor. With the help of these intelligent robots, we believe that it is entirely possible to achieve unmanned waste recycling in the future, thus solving the long-standing shortage of personnel in garbage sorting centers and greatly reducing manual sorting errors caused by fatigue.

Taking Picking Ai, a product of Gongye Technology, a domestic garbage sorting robot company, as an example, it is understood that the working principle of this product includes the following points:

(2) AMP (United States)
AMP Robotics was founded in 2014, and the company also uses robots to execute its artificial intelligence algorithms. The most successful case is the SSR plant in Florida, USA, using 14 AMP intelligent sorting robots. In 2019, AMP Robotics announced the completion of round A financing of $16 million, led by Sequoia Capital (United States). Previously, AMP Robotics had been invested by BV Baidu Venture Capital Angel Round. AMP declined to disclose the price of its intelligent sorting robot (the above data is from the network). According to industry insiders, AMP has not yet entered the Chinese market.

What should the blockchain wallet look like in the future?

Insurance investment can play the role of ballast in wealth management, China Case