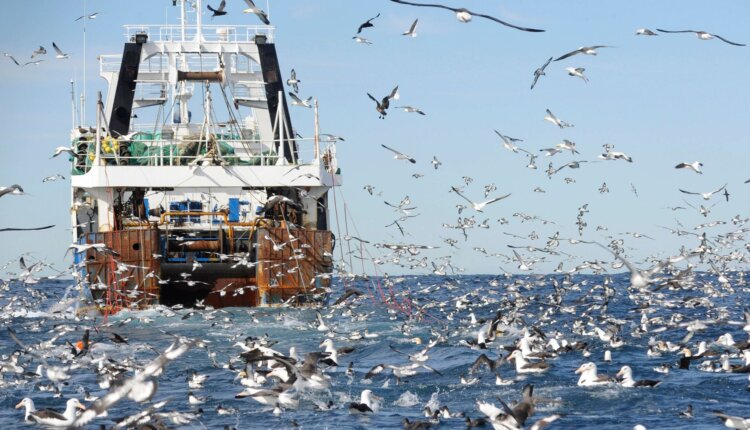 World oceans Endless expanse, infinitely far away: It doesn’t matter which coast you’re on, you can’t spot the high seas. It begins just 200 nautical miles (370 kilometers) out to sea and is larger than anything else in the world.

Its waters cover more than half of the globe and have given it the nickname, which now sounds almost trite: the blue planet.

Most people never see the high seas. And yet: Without them they could not exist. More than 50 percent of the oxygen in the atmosphere is produced in the world oceans.

They cool the planet, absorb greenhouse gases, provide food and are home to more animals and plants than live on the land surface of every continent. But the high seas are cursed. The high seas belong to no one. Their waters are outside national sovereignty. This is precisely why this part of the world oceans is exploited like no other. It is an almost lawless area.

The UN Convention on the Law of the Sea of ​​1980 regulates the use of the high seas and their resources. The protection of the ecosystem, of animals and plants, plays no role there. So far, just 1 percent of the high seas has been protected from human use by other means. Everywhere else, everyone takes as much as they want. Regardless of losses, especially those of the general public. And that despite limited resources.

The consequences are particularly evident in the global fish stocks.,More than a third of all fish stocks are now considered to be overfished – and the Food and Agriculture Organization warns that the trend is rising. At the same time, more and more plastic waste ends up in the oceans. It is estimated that up to 12.7 million tons a year, one truckload every hour.

If this continues, the weight of marine plastic could exceed the total mass of all fish by 2050.,Those species that survive are suffering from the climate crisis and increasing underwater noise. The high seas are getting warmer, more acidic and louder.

There are only a few retreat areas that are not polluted by humans and there, too, there is a threat of an end to untouched nature.

Because the deep sea is rich in cobalt and other rare earths in many places.

A fact that makes more and more mining companies go into raptures. Where the deposits on land are dwindling and extraction is becoming more and more expensive, they sharpen the drill bits for underwater mining.,From the water surface to the deep sea, the world oceans are now under pressure. It is hardly surprising that UN Secretary-General Antonio Gutérres declared an “oceanic emergency” in June. Like him, many hoped that there would be a legally binding UN treaty for the protection of the high seas before the end of the summer.

The United Nations have been struggling for such a treaty for more than 20 years. Because plastic, chemical and noise pollution, as well as the exploitation of fishing grounds and raw materials, not only have a local impact: the world oceans are closely interwoven. If they are stressed or overused at one point, this has consequences for the entire ecosystem.

The most recent and for the time being final round of negotiations by the UN on the protection of biodiversity in international waters came to an end early on Saturday morning German time. Just like four times before: without agreement. “This outcome of the conference is regrettable, because the catastrophic state of the seas is known to everyone and is rapidly deteriorating,” says Fabienne McLellan, Managing Director of the marine protection organization Oceancare.

She was after for negotiations New York, in the luggage the hope for marine protection zones, a moratorium for deep-sea and world oceans mining and above all an “environmental TÜV” for the high seas. “That sounds a bit dry, but it is an environmental policy instrument that enables projects and approvals to be assessed for their impact on examining the ecosystem of the high seas,” said McLellan.

The “environmental TÜV” is a systematic control instrument with binding standards for the entire high seas. Activities that don’t make it through the TÜV are not approved. The idea is contained in the most recent draft treaty, but practical details are still missing it from Oceancare.

But stay optimistic world oceans. In view of the renewed failure of the negotiations, this is probably the only option anyway.

How – and whether – the agreement can soon come into force depends on the UN General Assembly. The green light for another round of negotiations must be given here. And even then at least 30 countries are required to sign. “On the one hand, we have wealthy countries that fish on a large scale, exploit soil resources, are responsible for the pollution of the seas and destabilize the ecosystem of the high seas and world oceans.

You can definitely do that in the negotiations “We’re talking about brakes. And those are the developing countries, which feel the effects the most,” says McLellan from Oceancare. The nationalist interests of the individual delegations were clearly felt in the negotiating room.

In the end it only failed due to detailed questions and the limited time. One is on the home stretch, but the next attempt has to work. Also in the interest of climate protection.

“The world oceans are our best allies in the fight against climate change,” says McLellan. “They can only perform their function as climate regulators if they are healthy and resilient. Every species of marine animal plays an important role in this fragile ecological balance. The preservation of biodiversity is therefore at the heart of the High Seas Agreement. Governments must ensure this.”