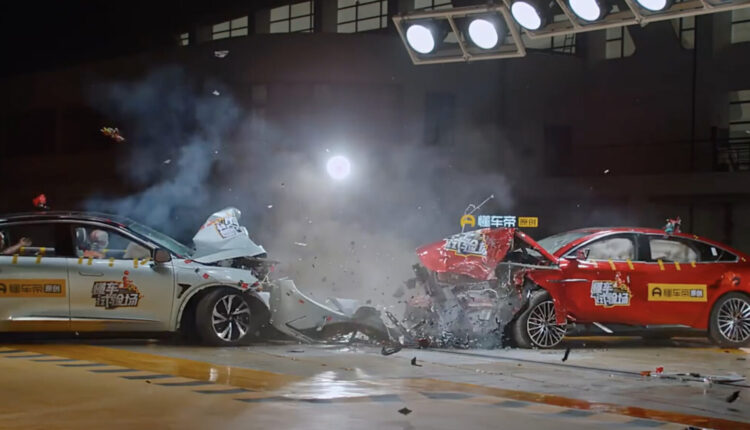 According to the video released by car critic @Know Chedi, BYD EV Electric Vehicle was seriously deformed after a collision 64km/h. After two days, a fire broke out, causing the vehicle to be completely damaged and unable to conduct follow-up testing.

Subsequently, @Know Chedi also issued a statement saying that there is no commercial cooperation with car companies in the collision test, and the original intention is to help consumers make good car purchase decisions. The evaluation video shows that the cause of BYD EV Electric Vehicle fire was determined by firefighting as caused by battery electrical line failure.

It is understood that the collision test speed is 64km/h. Overall, the performance of Jihu Alpha S is better than that of Yadihan EV. After a fierce collision, the front face of the Alpha S was deformed, but its front and rear doors could be opened normally, and the A-pillar and roof were not damaged much, but the side air curtain and side airbag were not opened normally.

In contrast, the whole BYD EV Electric Vehicle model is seriously deformed, and even dewelded in some places. After the collision, the double flash did not open, the door was not automatically unlocked, and the A-pillar and roof were bent to varying degrees. These seem to be somewhat inconsistent with the safety usually advertised by BYD Han.

The cooling fluid of the test vehicle is suspected to have been replaced.

Regarding the test results, BYD Automobile responded on July 25 that from the preliminary judgment of the information in the video and the background related data, there are many doubts: the coolant of the collision vehicle in the video (red, commonly used in the industry, conductive) and the coolant of the Han EV mass production vehicle (purple, unique to BYD, non-conductive) ) It is completely different. After the collision vehicle is replaced with conductive coolant, the coolant leaks within a few days after the violent collision, which causes the short circuit and triggers combustion.

At the same time, BYD Automobile said that the test standards and methods used in the video are non-mainstream, non-authoritative, and are not national and industry standards. At present, BYD will arrange technicians to investigate on the spot and investigate suspicions.

The Knowing Che also issued a statement at noon on July 26th: There is no commercial cooperation with car companies in the collision test program, and the choice of collision vehicles is not specific to specific enterprises. Each program retains a complete video recording from car purchase to the completion of the test, and authoritative institutions provide technical support. Relevant materials can be submitted. Justice.

Know Chedi was established in 2016, Registered capital of 1 million.

It is understood that BYD EV Electric Vehicle uses a lithium iron phosphate blade battery independently developed by BYD Automobile. It has passed the acupuncture test and crushing test before, and there was no open flame or smoke, and is known as the safest battery in the field of new energy.

In terms of stability, BYD said that the battery can effectively slow down the capacity attenuation of the battery, charging and discharging more than 3,000 times and driving 1.2 million kilometers. Moreover, the volume utilization rate of the blade battery is 50% higher than that of the square battery, and BYD EV Han can travel 600 kilometers on a single charge.

The main body of the operation of “Know Chedi” is Beijing Space Transformation Technology Co., Ltd., which was established on March 3, 2016 with a registered capital of 1 million yuan. Its evaluation is mainly aimed at the AEB active safety technology, energy consumption (fuel consumption), acceleration, control, braking and other performances of popular models on the market.

Regarding the authority of testing, He Yu, president of Knowing Chedi, once claimed in his speech that Knowing Chedi already has one of the most comprehensive vehicle evaluation databases in the industry. Based on standardized venues, professional tools and equipment, and industry-approved testing methods, Know Chedi has established a relatively complete evaluation system.

However, the Chedi was also questioned by BYD after this evaluation. BYD said that the test standards and methods used in the video are non-mainstream, non-authoritative, and are not national and industry standards.