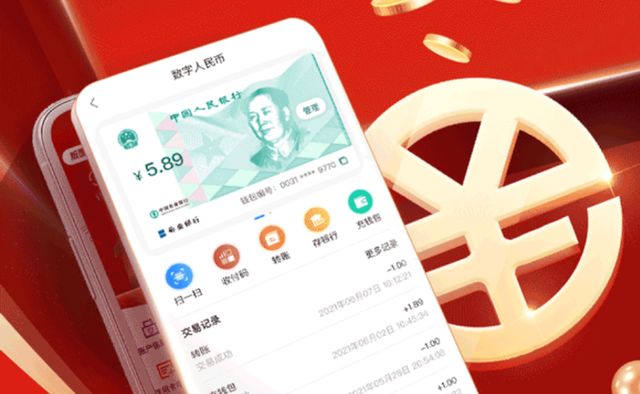 After the digital RMB APP (pilot version) was put on the shelves of major application stores, its application scenarios expanded rapidly.

In the eyes of many industry insiders, this indicates that the application of digital RMB is rapidly expanding to more high-frequency and small-scale livelihood consumption scenarios.

“More importantly, there is a strong linkage effect between this scene expansion and the promotion of the digital RMB APP (pilot version). A person in charge of a third-party payment institution pointed out. The release of the digital RMB APP (pilot version) marks that the exploration of digital RMB has entered the full test stage. Access to high-frequency livelihood scenarios such as takeout and online grocery shopping will undoubtedly promote the application ecology and transaction scale of digital RMB to be greatly improved.

Previously, Mu Changchun, director of the Digital Currency Research Institute of the People’s Bank of China, revealed during the “2021 Hong Kong Financial Technology Week” that as of October 22, 2021, 140 million digital RMB personal wallets had been opened, 10 million enterprise wallets had been opened, and the cumulative number of transactions had reached 150 million.

It is worth noting that compared with offline consumption scenarios such as transportation, shopping and catering services, users have higher transaction frequency of online takeaway and online grocery shopping, and the consumption amount is very different, which undoubtedly poses a greater challenge to the robustness and reliability of the digital RMB operation system under high concurrency conditions.

A person familiar with the research and development process of digital RMB technology pointed out to the reporter that at the technical level, the current digital RMB operation system is enough to cope with more complex and more frequent people’s livelihood consumption scenarios, such as reconciliation of funds settlement, capital transfer, etc. In the future, digital RMB should achieve a wider range of application promotion.

The key lies in the continuous construction of the acceptance environment and the improvement of the people’s use experience.

At the end of last year, the 2022 People’s Bank of China Working Conference pointed out that the pilot research and development of digital RMB should be promoted in a steady and orderly manner.

Wang Shaohui, senior researcher of the Hainan Institute of Finance of Bank of China (3.140, 0.05, 1.62%), believes that this indicates that the application promotion of digital RMB will be integrated with more scenarios. In the future, digital RMB will not only be “embedded” in personal food, drink, housing and transportation, but also be widely used for enterprise tax payment. , upstream and downstream payment and settlement and other high-frequency operation scenarios.

On January 6, the General Office of the State Council issued the “Overall Plan for the Pilot Comprehensive Reform of Factor Market-oriented Allocation” (2021-2025), pointing out that it supports the pilot use of digital RMB in retail transactions, living payments, government services and other scenarios.

It is reported that the Digital RMB APP (pilot version) is the official service platform for China’s digital RMB for individual users to pilot, providing the opening and management of digital RMB personal wallets, and the exchange and circulation of digital RMB.

Compared with the previous beta version, the pilot version presents two new changes. First, the original “customer acquisition” mode of targeted invitation and red envelope distribution is completely open to the people in the pilot area; the other is to collect merchant sub-wallets previously distributed in various operator ports, and users only need to add “sub-wallets” , digital RMB payment can be made in different merchant consumption scenarios, forming a strong promotion.

“In the past two days, the number of people downloading the digital RMB APP (pilot version) to open a digital RMB wallet has increased significantly.” A person from a large state-owned bank told reporters. However, they found that to stimulate the interest of new users in using Digital Yuan, more diversified high-frequency retail scenarios need to be introduced.

“This may be the main reason why digital RMB application scenarios have rapidly expanded to high-frequency people’s livelihood consumption scenarios such as Meituan grocery shopping and Meituan takeaway.” He thinks.

Previously, the Digital Yuan has been tested in the Meituan cycling scene, which has achieved good results and also enabled Meituan to accumulate quite mature digital RMB operation experience.

Data previously disclosed by Meituan shows that in the three months since the launch of the first Digital Yuan low-carbon cycling campaign launched in September last year, it has attracted about 8 million users to sign up, of which about 2 million users downloaded and opened Digital Yuan personal wallets.

The reporter learned from many sources that compared with cycling scenarios, the transaction frequency and consumption amount of online takeout and online vegetable shopping scenarios is higher, which undoubtedly puts forward higher requirements for the stability and reliability of Digital Yuan payment settlement under high concurrency conditions. In this regard, Meituan has done a lot of stress tests and internal tests to ensure the steady operation of it in high-frequency consumption scenarios such as takeout and online grocery shopping.

The above-mentioned state-owned bankers pointed out that access to high-frequency people’s livelihood consumption scenarios such as takeout and online vegetable shopping scenarios will undoubtedly further improve the user activity and number of users of the digital RMB APP (pilot version), and create new momentum for the continuous application and promotion of Digital Yuan.

Governments in many places speed up the expansion of application scenarios

It is worth noting that many local governments are actively promoting the large-scale expansion of digital RMB application scenarios recently.

On January 6, the Employment Promotion Center of Pudong New District, Shanghai, together with relevant financial institutions, issued the first Digital Yuan employment subsidy in Shanghai to help the masses to effectively prevent the possible risk of fund interception at the allocation terminal.

At the end of last year, under the guidance of relevant departments in Dalian, the Dalian Branch of Postal Savings Bank (5.520, 0.24, 4.55%), Dalian Branch of People’s Insurance Property Insurance and Northeast Branch of Anliang Futures jointly completed the implementation of the country’s first Digital Yuan participation in the “Insurance + Futures” project.

Recently, the Beijing Supervision Bureau of the China Securities Regulatory Commission and the Beijing Local Financial Supervision and Administration Bureau announced the list of the first batch of 16 projects to be included in the capital market financial technology innovation pilots, including the Digital Yuan application scenario innovation pilots of the securities industry.

In the view of the above-mentioned heads of third-party payment institutions, this indicates that the Digital Yuan application scenario will usher in a new round of large expansion in 2022. At present, relevant departments are actively promoting the construction of the acceptance environment.

On the one hand, with the help of intelligent and customized wallet selection and extensive use cases, we will continue to improve the user experience; on the other hand, we will transform and upgrade the acceptance system for more merchants.

On the one hand, they open up online and offline (47.830,-1.19, -2.43%) interoperability, membership management, points and voucher marketing and other industries of consumption scenarios. , help diversified payment systems such as Digital Yuan be more conveniently applied in these scenarios.

On the one hand, it provides services such as multi-wallet aggregate collection, multi-level account and fund management, real-time ledgering, etc., to help managers at different levels of enterprises grasp the status of capital turnover (including Digital Yuan collection) in a timely manner, and further withdraw Improve the digital management ability and capital use efficiency of enterprises.

The reporter learned from many sources that with the increasing popularity of Digital Yuan, more and more foreign retail enterprises have begun to accept this new payment tool. In the past, they were more accustomed to using traditional fiat currency for financial reconciliation and settlement, and they were quite worried about the inclusion of digital RMB in the enterprise capital turnover business.

Now, with the popularity of digital RMB, they are creating new business flows. They are trying to cooperate with payment + SaaS institutions to build a Digital Yuan receipt and payment service system. In addition, some franchised catering enterprises are starting to promote the legal person certification of franchise stores and assist franchise stores to open Digital Yuan enterprise wallets as soon as possible in order to collect Digital Yuan to promote business revenue growth.

More and more merchants and consumption scenarios access digital Yuan, which will bring a stronger and stronger positive effect to the promotion of digital RMB APP (pilot version). On the one hand, the latter can create a more complete ecological closed loop of digital RMB applications, greatly broaden the scope of Digital Yuan use, and on the other hand, it will continue to improve the use experience of digital RMB, attract more and more people to participate in it, paving the way for the larger-scale popularization of digital RMB in the future. The head of the third-party payment institution pointed out.