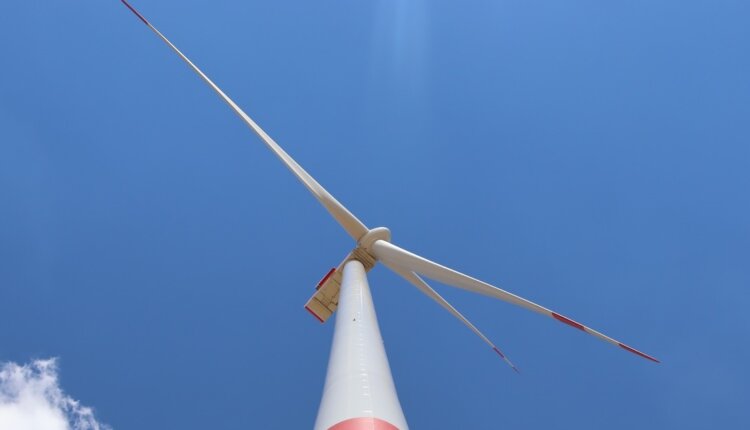 Enercity wants to increase its own wind energy capacity to 1 GW by 2025. The wind farm is located near the municipality of Schleife (Sorbian: Slepo). The project in the Saxon district of Görlitz comprises two construction phases.

Four wind turbines with a total output of 24 MW are to be built on the Hochkippe. The current regional planning has identified wind suitability locations there. The second, larger construction phase includes 29 wind turbines in the forest with an output of 174 MW. Together, the wind farms are expected to generate 540 GWh of electricity annually.

Most of the wind energy project is planned in the forest

The approximately 900-hectare area for the second construction phase has not yet been designated as a suitable wind site. According to Enercity, large commercial forests, such as in the district of Görlitz, are very well suited for wind turbines.

There, the distances to residential buildings are generally greater than in open spaces. In addition, the wind turbines are less visible in the landscape in the forest. In Bavaria, forests are among the areas where a exception to the 10H rule has recently been in force.

With the prescribed ecological compensatory measures for the projects, Enercity always plant ecologically more valuable forests. These are also more resilient to climate fluctuations than commercial forests. Almost half of the 11.4 million hectares of German forest is non-natural commercial forest, explains Enercity.

So far there are around 2,000 wind turbines in the forest in Germany. Less than 1,000 hectares would be used for this, i.e. 0.008% of the total forest area in Germany. Wind energy in the forest therefore still has enormous potential.

Enercity does the math: A wind turbine with an output of 5 MW requires around one hectare of forest. This also includes temporarily used areas for construction and access roads. During the operating time, it is only 0.5 hectares per 5 MW. Over the course of its life, the plant will generate around 16 GWh of electricity. Compared to a gas-fired power plant, this saves 6,400 tons of CO2 annually.

On average, the forest stores 10.4 tons of CO2 per hectare for the development of new biomass. Thus, the climate protection effect is 600 times higher if the forest is also used for wind power. In this calculation, however, Enercity does not take into account the CO2 that has already been bound in the biomass of the forest over the years.

The wind farm is a first component of the planned “ecological power plant” in Schleife. In March 2022, the municipality presented the plans for building a “self-sufficient village”. In addition to the wind farms, a wood-fired power plant with food production and heat storage is also to be built.

A consortium wants to invest 500 million euros for this. This should create a three-digit number of qualified and permanent jobs in the village. Some of the income should flow into the ecological upgrading of the forest.

The municipality will be financially involved in the project in accordance with the EEG. The citizens should benefit in the form of reduced energy prices and other participations.

enercity supplies around one million people with electricity, heat, natural gas and drinking water. With sales of 3.7 billion Euro and around 3,000 employees throughout the Group, it is one of the ten largest energy supply companies in Germany. Since 2018, enercity has been offering private customers throughout Germany electricity products that supply them with 100% green electricity.

Enercity has been supplying corporate customers throughout Germany since 1998. The “enercity” brand was established in 1996 for special efficiency programs and products. Since 2000, “enercity – positive energy” has been the umbrella brand of the company. In 2018, the brand name became the official company name by renaming the “Stadtwerke Hannover Aktiengesellschaft” into “enercity Aktiengesellschaft”. Owners are theVersorgungs