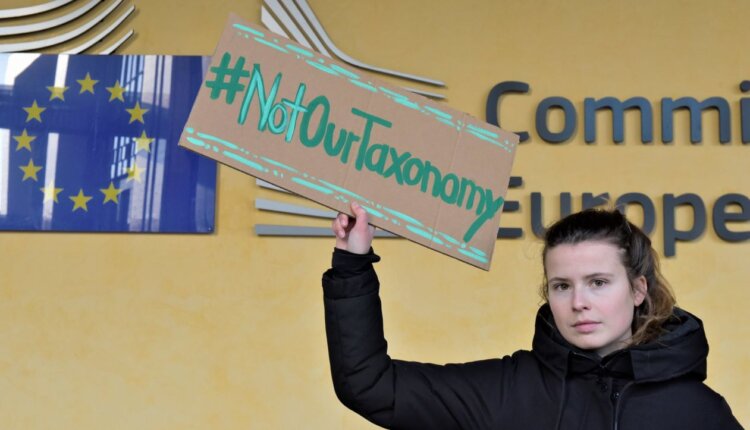 EU climate policy, Are investments in gas and nuclear power sustainable? Politics, industry and environmentalists have been arguing about this for a long time.

Environmentalists expressed their deep disappointment with the result of the vote. “Fridays for Future” activist Luisa Neubauer wrote on Twitter that it was a “hard day”: “The EU climate policy is now permanently weakened.” Parts of the EU Parliament had decided “that they would rather greenwash us all into Nirvana”.

Fridays for Future« announced that billions of euros are now being invested in new gas infrastructure and nuclear power plants instead of in the expansion of wind and solar power plants.

The Social Democratic MEP Joachim Schuster spoke of a “setback for climate and environmental protection in Europe”. The Green politician Michael Bloss commented: “Today is a sad day for the European energy transition.”

Government spokesman Steffen Hebestreit announced: “Regardless of EU climate policy voting result, the federal government remains with its position and considers nuclear energy unsustainable.” However, he did not say whether the federal government would have preferred a solution without gas and nuclear power rather than one with both sources of energy.

Opponents also immediately announced that they wanted to take legal action before the European Court of Justice. The governments of the EU countries Austria and Luxembourg took such a step in the EU climate policy event that the parliamentary vote fails at the beginning of the year and have now confirmed their plans. Left co-boss Martin Schirdewan called on the federal government to support a lawsuit.

The Czech Prime Minister Petr Fiala described the legal act on Wednesday as a “difficulty negotiated and fragile compromise”. The liberal-conservative politician argued that a number of EU states could only meet their obligations from the common climate goals with such rules.

They envisage that the EU will become climate neutral by 2050. (Read here which countries are now benefiting. )

The industry was relieved. “More than ever, investments in gas infrastructure are needed to ensure security of energy supply in the midst of the current energy crisis, especially in liquid gas terminals,” commented Holger Loesch from the Federation of German Industries (BDI).

With the EU taxonomy, the way is now clear for financial flows in the transition from coal and natural gas to renewable and alternative gases – this gives the industry planning security.

Classification is intended to promote investments in climate protection

Specifically, the vote in Parliament was about a supplementary legal act on the so called taxonomy of the EU. It is a classification system designed to steer private investment into sustainable economic activities and thus support the fight against climate change.

It is relevant for companies because it influences the investment decisions of investors and could therefore have an impact on the financing costs of projects, for example. Investors should also be able to avoid investments in climate damaging economic sectors.

Reducing energy demand is another major aspect of reducing emissions, If less energy is needed, there is more flexibility for clean energy development. It also makes it easier to manage the electricity grid, and minimizes carbon-intensive infrastructure development.

Major increases in energy efficiency investment will be required to achieve climate goals, comparable to the level of investment in renewable energy.

Several COVID-19 related changes in energy use patterns, energy efficiency investments, and funding have made forecasts for this decade more difficult and uncertain