Extra Gas deal with Azerbaijan autocracy : “Nothing else fast to do” 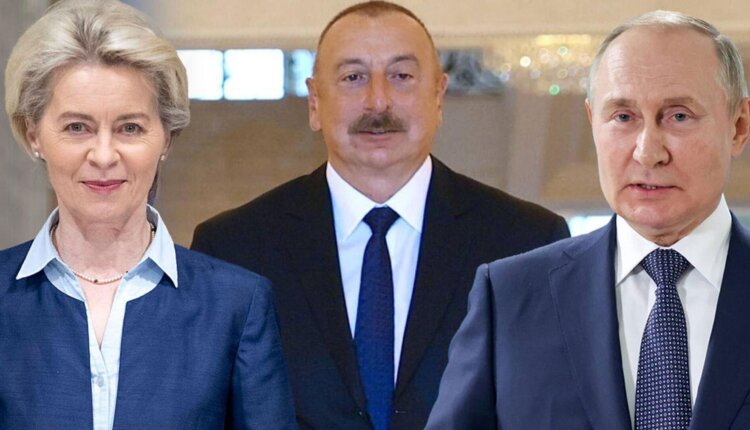 Gas deal with Azerbaijan, Shaking hands with the autocrat, smiling friendly. As EU Commission President Ursula von der Leyen traveled to Azerbaijan on Monday, she had one goal: the country should deliver more gas to Europe.

The independence of Russia must eventually decline. At the end of the meeting there was a declaration of intent: Azerbaijan wants to supply twice as much gas as before by 2027.

A success for von der Leyen. But the country is even worse off than Russia in international democracy rankings and in the war with the neighboring country Armenia for the Nagorno-Karabakh region also committed horrific war crimes. How does that fit with basic European values? Ultimately, these also include democracy, the rule of law and respect for human rights.

Stefan Meister, South Caucasus expert from the German Society for Foreign Politics, says: “The EU is just pragmatic.” He thinks the EU should already have minimum standards, especially when it comes to democracy and the rule of law.

However, von der Leyen did not address these issues publicly in Baku. “The EU’s negotiating position has deteriorated as a result of the gas crisis,” says Meister. “In Baku, they know that the Azerbaijani gas is needed and the EU will buy it without any human rights obligations.”

Whether Qatar, Saudi Arabia or Azerbaijan: “There is nothing else to do. Most countries that export raw materials are autocracies”

Nevertheless, the rapprochement with Azerbaijan caused severe criticism: there is talk of a double standard. “Neither Putin’s Russia nor Azerbaijan are ‘trustworthy partners’. We are currently replacing one dictator’s gas with the other,” tweeted Michael Bloss, a member of the European Parliament. Christian Mihr, head of Reporters Without Borders, wrote: “FYI, Azerbaijan is ranked 154 out of 180 in ReporterOG’s press freedom rankings”.

Criticism also came from the left: “There are always new human rights criminals and dictators from whom we get energy,” said Żaklin Nastić, spokeswoman for human rights for the left-wing parliamentary group, in the newspaper “Neues Deutschland”.

In 2021, the country under the government of President Ilham Aliyev was even behind Russia in the Democracy Index of “The Economist” magazine – in 141st place out of 167. The Kremlin regime was listed in 124th place. However, the ranking dates from before the Russian war of aggression against Ukraine.

But Azerbaijan is also involved in a violent territorial conflict. It is about Nagorno-Karabakh – a de facto republic to which both Azerbaijan and neighboring Armenia lay claim. The affiliation of the region of Nagorno-Karabakh, which is predominantly inhabited by Armenians, has been disputed for centuries. In 1921 Nagorno-Karabakh was granted to Azerbaijan by the leadership of the Soviet Union.

There were repeated protests against this, until the situation escalated in the late 1980s. The Christian Armenians in the region split from the Muslim-dominated Azerbaijan. When Armenia finally entered the conflict, the first war between the ex-Soviet republics broke out. Together with the army of Nagorno-Karabakh, Armenia took control of the region. A ceasefire agreement was concluded in 1994, which Azerbaijan has repeatedly violated.

In August 2020, war broke out again. With military support from Turkey, Azerbaijan launched an offensive that ended after six weeks with a ceasefire agreement mediated by Russia. Historically, Armenia sees Russia as a protecting power – although Moscow intervened late in the conflict.

The agreement returned around two-thirds of the region to Azerbaijan, which is why it is seen as a success for the country. Russian troops are now supposed to monitor compliance with the agreement – and are thus becoming a security guarantor. “Without the Russian presence, Azerbaijan would conquer the disputed region,” says South Caucasus expert Meister.

But despite the official ceasefire, fighting is still going on: in November, at least six Armenian and seven Azerbaijani soldiers died after fighting in the border area. In December, Russian President

The list of human rights violations in Azerbaijan does not end there: for the past year alone, the organization Human Rights Watch has complained that members of the opposition are being persecuted, prisoners are being mistreated and tortured, women are exposed to an above-average amount of violence and freedom of expression is restricted.

There are two reasons why the EU still considers Azerbaijan to be a more suitable partner than Russia, explains political scientist Meister: “First, Azerbaijan is not waging a large-scale war against a country directly neighboring the EU and does not fundamentally question the European security order.”

The war over Nagorno-Karabakh is local, not comparable to the Russian attack on Ukraine. “Secondly, Azerbaijan is already a major supplier of oil and gas to Europe and could also become a major transit country for raw materials from Central Asia.”

The EU must take account of its dependence on the autocratic country: “You always make yourself dependent when you buy raw materials from countries or build pipelines through countries – that’s the risk,” says the expert. This applies not only to Azerbaijan, but also to Turkey. Because the Southern Gas Corridor, a combination of pipelines from the Azerbaijani gas field Shah Deniz to Italy , runs through the EU neighboring country.

Turkish President Recep Tayyip Erdoğan is also benefiting: “He wants to become a distributor of gas from the region,” says Meister. It is true that both Azerbaijan and Turkey have an economic interest in trading with the EU – and would hardly want to risk that through unreliability. “But we also know Erdoğan. If he has a good negotiating position, then he uses it.”

Something else strengthens Erdoğan’s negotiating position, at least as long as the Azerbaijani gas for the EU comes from the Shah Deniz field. Although this is operated by the British group BP, the Turkish state-owned company TPAO is the third largest shareholder with 19 percent. With Lukoil, 19.99 percent are even in Russian hands – however, the group is not state-owned. Even after the start of the war, the Lukoil board of directors was still critical of the Kremlin.

The Kremlin still exerts influence in Azerbaijan – even if the country does not want to become dependent on Russia. “From Azerbaijan’s point of view, Russia is the major security player in the region that cannot be ignored,” says Meister.

The country does not officially support Ukraine, but only indirectly, for example with humanitarian and financial aid. “Azerbaijan doesn’t want to provoke Russia.” The aim of the country is a balanced foreign policy : With relations to Turkey, to the EU, the USA and to Russia.

It is fitting that shortly before the gas agreement with the EU, the Caspian Five – Turkmenistan, Kazakhstan, Iran, Russia and Azerbaijan also agreed to cooperate more closely. The Azerbaijani President staged the smile and handshake not only with Ursula von der Leyen, but also with Vladimir Putin. The EU will have to put up with all this as long as gas is more important to them.