Goldwind Technology is nugging the hundreds of billions of wind power market, worth ? 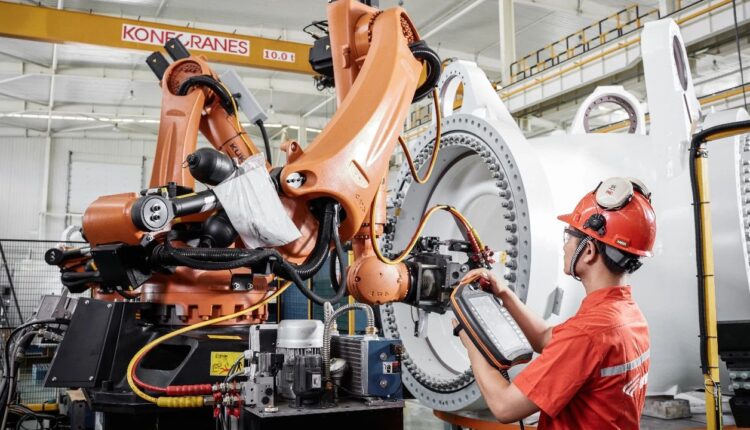 In the new energy wave, the wind power leader Goldwind Technology (002202.SZ) has performed well in the secondary market and has attracted much attention. But on the evening of September 21, an announcement of Goldwind’s shareholder reduction plan broke this joy. As soon as the news came out, the stock price of Goldwind fell. As of the close of Friday (September 24), Goldwind fell 7.44% in the three trading days after the holiday, and its total market value was fixed at 74.11 billion yuan.

Goldwind Technology is a long-established fan supplier company established in 1998, and it is listed on the “A+H” market. According to the mid-year report released in August, as of June 30, 2021, the company had received nearly 18 billion yuan in revenue, a year-on-year decrease of 7.83%. It is worth noting that this is the first decline in Goldwind in four years. The good news is mixed. Its net profit attributable to its parent is 1.849 billion yuan, a year-on-year increase of 45%, which is also a record high in the same period since the listing of Goldwind.

The biggest advantage of wind power is that it is cheap. Taking advantage of the “Thousand Towns and Ten Thousand Villages Wind Control Plan”, the “installation tide”, and the “dual carbon” policy, Goldwind Technology is also welcoming development opportunities. At the same time, the “back waves” are coming fiercely, and it may be difficult for Goldwind to “lie down.” So, where will Goldwind go?

Reduced by the largest shareholder, or cashed out 4.7 billion

As a veteran fan supplier, Goldwind Technology has a long-standing reputation and holds a leading position in the industry.

Where does Goldwind come from? According to Node Finance, Goldwind Technology is one of the earliest domestic companies to enter the field of wind power generation equipment manufacturing. It currently has three main businesses: wind turbine manufacturing, wind power services, and wind farm investment and development, as well as water services and other businesses. According to Goldwind’s financial report, in the domestic wind power market , its market share ranked first for ten consecutive years. However, in the global wind power market ranking, its ranking will drop to second place in 2020.

From 1985 to 1997, this was the twelve years considered by Goldwind as an exploratory period. In 1998, Goldwind Technology was established. In 2007, with the help of new energy sources, Goldwind achieved “A+H” listings in two places and became the “first share of a wind turbine supplier”. Today, the A stock market is worth more than 70 billion yuan. For a long time, in the field of wind power, Goldwind’s market share has been among the best. At the same time, it is also the top three wind turbine supplier in the world.

According to the announcement, the company’s largest tradable shareholder Harmony Health Insurance Co., Ltd.-Universal Products (hereinafter referred to as Harmony Health) plans to reduce its holdings by no more than 211 million shares through centralized bidding and block transactions, accounting for the company’s total share capital. 5%.

Regarding the reduction of shareholders holdings, the explanation given by Goldwind’s announcement is-its own business needs. When shareholders reduce their shareholdings, what everyone is most concerned about is the issue of how much cash out? Based on the closing price on September 22, if Harmony Health reduces its holdings of 211 million shares, it is expected to return 3.948 billion yuan of funds, plus the previous reduction of 774 million yuan, for a total of 4.722 billion yuan.

In addition, Harmony Health will no longer be the largest shareholder of Goldwind after the implementation of this share reduction plan. It is understood that Harmony Health was once a subsidiary of Anbang Property and Casualty Insurance, and the actual controller after the equity penetration was Anbang Group (namely, Dajia Insurance).

The business map is huge, with 492 subsidiaries

The upstream core components of the wind power industry are mainly gearboxes, generators and blades. The midstream is the main wind power generator, which is equivalent to the heart of wind power, while the downstream is mainly the investment and operation of wind farms. Goldwind is one of the earliest companies in the country to enter the field of wind power equipment manufacturing. It currently has three main businesses: wind turbine manufacturing, wind power services, wind farm investment and development, and water services.

On August 20 this year, Goldwind Technology released its semi-annual report. An interesting phenomenon has appeared. In the first half of the year, Goldwind experienced a situation of increasing profits but not income. Specifically, during the reporting period, the company achieved revenue of 17.904 billion yuan, a year-on-year decrease of 7.83%. It is worth noting that this is the first decline in Goldwind in four years. At the same time, net profit attributable to the parent company was 1.849 billion yuan, a year-on-year increase of 45%, setting a record high in the same period since listing.

Further analyze the reasons for the decline in Goldwind Technology revenue, which may be related to the decrease in wind turbine sales revenue. The mid-year report showed that during the reporting period, the company’s sales revenue of wind turbines and parts was 12.872 billion yuan, a year-on-year decrease of 11.63%; the external sales unit capacity was 2965.85MW, a year-on-year decrease of 27.66%.

On the other hand, Goldwind Technology debt pressure cannot be underestimated. As of June 30 this year, its asset-liability ratio was 68.9%, an increase of 1.48% over the same period last year. From the perspective of liability composition, Goldwind’s short-term debt balance is 1.087 billion yuan, long-term loan balance is 22.15 billion yuan, non-current liabilities due within one year is 4.289 billion yuan, and the scale of interest-bearing liabilities is up to 27.526 billion yuan.

Where did the funds go? Due to the low profit margin on the sales of wind turbines and parts, and the gross profit margin of wind farm investment and development business has been maintained at 60% to 70% throughout the year, as a wind power motor manufacturer, Goldwind cannot resist the temptation. Looking at Goldwind 2021 mid-year report, it can be seen that as of December 31, 2020, Goldwind construction in progress is nearly 13 billion, mainly for the construction of wind farms.

In the mid-year report of 2021, the company realized revenue of 2.78 billion yuan in power generation, an increase of 32.3% over the same period of the previous year; the gross profit of wind farm development accounted for 40.2%, and the overall proportion continued to rise. If Goldwind Technology continues to invest in the development of self-built wind farms, this may generate stable cash flow and profits for Goldwind.

Goldwind does not dare to “lie flat”

Not only environmental protection, wind energy is also inexhaustible. 2021 is known as the first year of the domestic onshore wind parity price. In the short term, the current surge in the wind power sector may be related to the news of power rationing during the Mid-Autumn Festival holiday.

Since mid-September, the “dual control” of energy consumption in Jiangsu Province has continued to increase, impacting key energy-consuming industries. The steel industry has now begun to suspend production and limit production unprecedentedly;

On September 16, the National Development and Reform Commission issued the “Plan for Improving the Dual Control System for Energy Consumption Intensity and Total Volume”, which showed that energy consumption must be coordinated for major national projects, resolutely control high-energy-consuming and high-emission projects, and encourage local governments to increase Renewable energy consumption.

However, even if my country’s onshore wind power bidding volume is increasing rapidly, the development of more than a dozen domestic OEMs is not benign and healthy. Some second-tier OEMs grab market share by reducing prices, and finally have to lead the mainstream Manufacturers followed the price cut.

On September 7, the prices of wind turbines for two projects at the CGN New Energy Yunnan base were opened. The lowest prices were 1950 yuan/KW and 1880 yuan/KW, setting a new record for Chinese wind turbine bidding models.

To use the fashionable words of the moment, it is that domestic machine manufacturers have fallen into a state of “involution”. Even if you are the “big brother” of the domestic wind power sector, Goldwind Technology which is facing a front and back attack, does not dare to slacken its efforts. It not only has to face the problems of the same established companies, but also has to deal with the pressure from the “back wave”.

This can be seen in the mid-year report. In addition to Mingyang Intelligent (601615), the strength of Electric Wind Power (688660) cannot be underestimated. In the first half of this year, the revenue of these two companies was 11.145 billion. Compared with 12.253 billion, and Goldwind’s revenue of 17.904 billion, the gap is not very big. It is worth mentioning that the current market value of Mingyang Smart is over RMB 50 billion.

Since the net profits of these two companies are only 1.041 billion and 351 million respectively, there is still a big gap in their profit margins compared with Goldwind, but it also puts a lot of pressure on Goldwind.

In 2020, even if Goldwind Technology achieves the tenth consecutive market share of the domestic wind power market, it is undeniable that its market share has dropped from 28% in 2019 to 21% last year. Weakness, especially as of the end of the first quarter, Mingyang Intelligent (601615) has 15.77GW of orders on hand, while Goldwind’s orders on hand is 15.96GW, the gap is very small.

Under the wind, whether Goldwind Technology, which has been cultivating for many years, can continue to lead the trend, and whether the market value of 70 billion can be raised to a higher level is still full of unknowns.