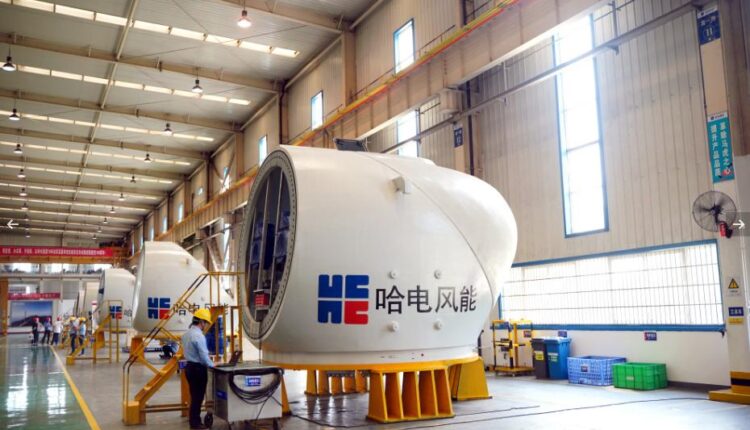 Harbin Electric, China’s earliest power equipment enterprise, has made great contributions to the field of energy and equipment in China. However, due to location, the development rate has slowed down in the past two decades, but on the road of transformation.

Harbin Electric Power has made important decisions to bring the top five winds in China. Xiangdian Wind Energy, a manufacturer of electric mainframes, has taken drastic actions against the original Xiangdian Wind Energy in just a few months. Not long ago, it began to recruit talents from the general manager to the deputy general manager in charge. Just a few days ago, Harbin Electric Power Group and Hunan Xingxiang Asset Management Co., Ltd.

According to the latest announcement from the industry media, in recent days, the first 4.5MW unit of Taiyuan Heavy Industry Aerodyn platform was successfully connected to the grid to generate electricity at the Zhangbei Test Base of the Chinese Academy of Electrical Sciences. Although this news came a little late, it finally came, adding a new choice to China’s large-capacity land fan.

It has a registered capital of 1 billion yuan in 15 years. It is also a well-sounding state-owned enterprise. In addition to its institutional problems and regional disadvantages, its development has not been very smooth, but since the past two years, it has also begun to calm down and start the research and development of wind power. Although the 4.5MW is slow this time, as long as state-owned enterprises work hard, their stamina cannot be ignored.

From the introduction, this 4.5 model is the first model jointly developed with Aerodyn in Germany, and the blade specifications will be increased in the future to adapt to medium and low wind speeds, that is to say, this is only the beginning. It should be pointed out that the model especially introduces the convenience of transportation and hoisting, the cabin splitting, overall transportation and hoisting, and reducing construction costs, which is also a trend direction for large models at present.

The attack of “transformation and freshmen” has become one of the important directions of Taizhong in the future. Taihe has given unprecedented support to new energy companies in terms of capital, policies and other aspects. This Harbin Electric 4.5MW prototype has been successfully hoisted and connected to the grid from the formulation of component technical agreements, procurement, construction and design of all mechanical and electrical drawings in the factory. The electricity lasted for 10 months. It should be said that the progress is not slow, and it will continue to be promoted 5. The XMW, 8.0MW and 10.0MW projects will go into the sea quickly.

Cooperation between central enterprises: the advantages of late issuance are unlimited

Zhongguang Nuclear New Energy practices the “strict and meticulous” work style of China Broadcast Nuclear Power, has rich experience in the planning of large new energy bases, and is very willing to cooperate more widely with central enterprises such as CRRC. It is suggested that the two sides should combine their respective “14th Five-Year Plan” goals, give full play to their respective advantages, serve the “two integration” goals in accordance with the deployment requirements of SASAC, find opportunities to deepen cooperation, establish a practical working mechanism, and plan the construction of a new energy base, share risks and win-win cooperation. In particular, a sentence was added to the last news: Li Yilun made arrangements for the follow-up specific work compare Harbin Electric !

Shandong CRRC Wind Power is actually a fourth-level subsidiary of CRRC. It is a subsidiary of Shandong CRRC Qiche Group, a subsidiary of CRRC. It is one of the few wind power equipment companies with two industries, mainframe and tower barrel. In the past, its development has been tepid, but with the gradual slowdown of CRRC’s high-speed rail and railway business, Guozhongche has taken the new energy equipment business as one of its core businesses. Judging from Yu Weiping, vice president of its large group, personally leading a team to visit China Broadcast Nuclear, the importance CRRC Group attaches to the wind power business can be seen, look Harbin Electric.

United Power is a wind power whole machine manufacturer of the former Guodian Group and now the National Energy Group (combined and merged by Guodian Group and Shenhua Group). For some reasons, the market share of United Power has gradually shrunk and its ranking has declined: since 2016, United Power, which has fallen to fourth place for four consecutive years, and to 8th and 10th in 2019 and 2020 respectively. The decline is gradually emerging, which may also be a slight inadequacy of market behavior before Union Power in the protectionist market competition situation within Guodian Group, but this does not mean that the future of United Power is slim.

In the sequence of state-owned enterprises of central enterprises, wind power equipment has been upgraded to a second-level subsidiary, and joint power is absolutely the only one. From this point, we can know the importance the group attaches to joint power. It is understood that in the next few months, the national energy group will also increase its capital to joint power. The specific scale is not clear, but it will definitely not be lower than Harbin Electric Wind Energy. Size. From Qicha, Guodian United Power Technology Co., Ltd. was established in June 2007, with a registered capital of only 313 million yuan, which is indeed small in the industry.

State-owned enterprises and central enterprises: the main military enterprises in the wind power equipment industry in the future

In addition, the wind power equipment enterprises of four and nine state-owned enterprises introduced today, whether it is the three major power enterprises that are already in the forefront, or the later local state-owned enterprises and CRRC central enterprises, have been focusing on the trend of new energy development in the energy transformation and upgrading. Although it seems to be a little crazy leap forward at present, the actual results show that The development of wind power is still beyond the understanding of our industry itself, and the installed capacity in the first half of the year has told us the result.