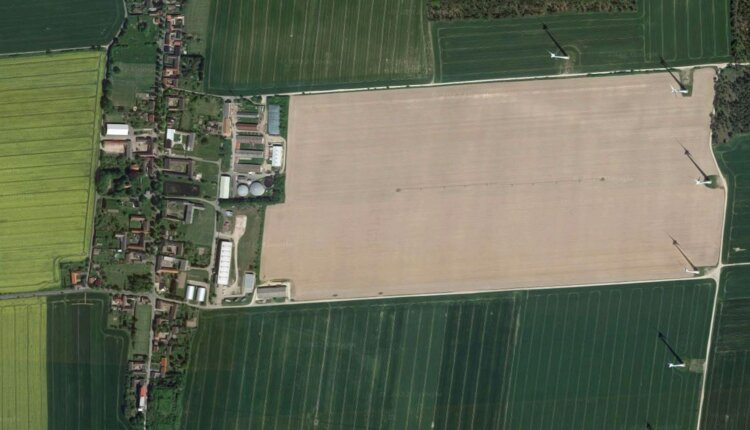 Freedom energy Because the wind turbines in Feldheim in Brandenburg are turning, Dozens of rotor blades, sometimes at a height of 100, sometimes 150 meters are circling and a sustained whistling tone that emanates from each mill indicates: the transformers are working hard, converting direct current into alternating current, ready to be fed into the Feldheim network.

Michael Raschemann looks ecstatic over the field. The sun is beating down, it’s well over 30 degrees, the air is oppressively heavy. But the wind blows up high – and that is the most important thing for Raschemann, which is why the civil engineer is so exhilarated.

Raschemann – shorts, rolled up sleeves – points to a smaller windmill at the very edge of the field. “We started over there,” he says. There he and his wife Doreen built the first wind turbine for Feldheim.

That was in 1994, when Raschemann was still a student. It was the beginning of a small revolution.,In the meantime there are 56 mills, spread over several square kilometers, most of them are in fields, some also protrude from the forest. The gigantic wind farm dominates the landscape from afar. ‘He made Feldheim a sensation. Visitors from all over the world travel to the Brandenburg pampa because of him.

Representative from Guatemala, the Philippines, even the former First Lady of Japan – they have all been here to find out: How did Feldheim manage it? Because Feldheim is self-sufficient. That means: energy-independent. Sheikhs, Putin and the Ukraine war, the exploding energy prices and horror scenarios for the coming winter – they can all remain stolen from the people of Feldheim.

In the town of only 130 inhabitants, energy costs have remained stable for more than ten years. At 12 cents per kilowatt hour of electricity, they are far below the price of more than 30 cents in the rest of Germany.,Because Feldheim, the energy oasis, simply supplies itself with electricity and heat. And even produces so much energy that it would be enough for 55,000 more households Freedom energy.

How could a community that has been broke since the 1990s succeed? Where in many places in Germany, citizens’ protests are forming faster than you can spell the word “wind turbine”? And can this concept be the salvation for Germany in the looming energy crisis? The Raschemanns smile when you ask them about the public protests in Feldheim. “That was never a problem,” says Doreen Raschemann. Of course there were skeptics: the hunters feared that their game would be driven away. Some farmers feared for their acreage.

However, the majority of residents were on board after only three information events – although each individual had to dig into their own pockets to finance the event. In a community that has no money, a revolution can only succeed if everyone pulls together.,Every Feldheimer has invested a total of 3,000 Euro in the project – for this he became involved in a newly founded energy company headed by the Raschemanns.

It was clear from the start what the people from Feldheim would get in return: security of supply, independence from large corporations, low prices and the right to have a say in the future, says Raschemann. “They listened to the arguments, weighed them up and decided for themselves: We want that.”,Today, the Feldheimers are happier with their decision than ever before – including those who live particularly close to the plant.

Ingrid Neye’s house is on the outskirts of Feldheim, just 600 meters from the first wind turbines. The 76-year-old opens the door in a light summer blouse, the television is on in the background. She is “very satisfied” with the decentralized energy concept.

Doesn’t the sight of the wind turbines bother you? “You got used to it,” she says, shrugging. “In other places the S-Bahn runs long and we get something out of it.” “We get something out of it” – that’s the key that convinced the people from Feldheim. That’s what Neye, the Raschemanns say, and Mayor Michael Knape also confirms.

Even the biggest skeptics are now satisfied by this “quid pro quo” principle: the farmers collect rent for the areas on which the wind turbines are located and benefit from the low prices on their energy-intensive farms. “They now see themselves as farmers and energy farmers,” says Raschemann. The deer also quickly got used to the system.

The high stands of the hunters have been in the middle of the wind farm for a long time. As easy as it was to win over the people from Feldheim, the state and the large energy companies viewed the project with a critical eye.

Only Michael Knape knows that too well. The man with the bright blue eyes has been the mayor of the Treuenbrietzen community to which Feldheim belongs for 25 years. From the beginning he led the Freedom energy revolution in the village with the Raschemanns.

Because the reservations were great: A bankrupt municipality that wants to buy systems worth more than one million euros? Knape and the Raschemanns assured: We can do it, with the deposits from Feldheim and subsidies from the federal government and EU. In the end, the country gave them a blank check: Do what you want – if you fail, it’s on your own.

Knape is grateful for this opportunity and is convinced that independence in the energy sector cannot be achieved without more courage to experiment. “The energy turnaround with renewables can only be achieved for the whole of Germany with many, many decentralized projects like this one,” he says. “There is no such thing as a giant wind turbine that could supply all of Germany.” Politicians, Knape thinks, have to trust the citizens much more often. “They are often a lot smarter than they think.”

In Feldheim, the combined forces also prevailed against the large energy company that previously supplied the village.

He simply refused to hand over the electricity and heating network to the Feldheimers for their oil and gas-free energy supply. The Feldheimer whistled on it. Without further ado, they dug up the whole village and laid new lines to every house.

The company that swatted the people of Feldheim so hard quickly regretted its decision: After a few years, it got in touch – and wanted to get in and share in the success, says Mayor Knape . He laughs: “I can only say: Gorbachev!” In other words, life punishes those who come too late.,There has been no sign of digging in Feldheim for a long time.

The place is picturesque, small single-family houses are lined up like on a string of pearls. In the center of the village is now the “New Energy Forum”, where the Raschemanns, Knape and volunteers explain to politicians, the press and school classes how energy independence can succeed.

But why isn’t Treuenbrietzen completely self-sufficient, why haven’t communities all over Germany imported the concept? It all depends on the residents, says Knape. The willingness to experiment is not as great everywhere as it is here.

He doesn’t find it stupid or annoying. The wish of the community is accepted. “Anyone who wants to force things will fail,” the mayor is certain. Michael and Doreen Raschemann agree and yet they dream much bigger.

As the next project, says the civil engineer, they would like to make a city self-sufficient. Feldheim, only in large. The only thing missing is a place where the impartiality is as great as in Feldheim.