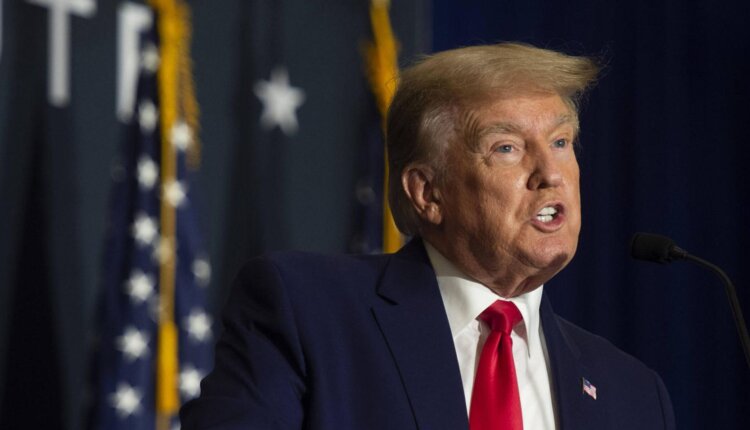 A year and a half ago, after the revelations by the committee of inquiry into the attack on the US Capitol, the pressure on the Justice Department is increasing.

According to the “Washington Post”, there are now increasing indications that the ministry’s behavior of the then president.

Donald Trump examined more closely. The question is whether Attorney General Merrick Garland could take criminal action against Trump. Critics have accused him of being too hesitant so far.

The newspaper, citing anonymous sources, reported on Tuesday evening (local time) that prosecutors spent hours asking witnesses before a grand jury detailed questions about meetings Trump chaired in December 2020 and January 2021 would have. A grand jury will be called upon to review evidence in possible crime cases and decide whether to press charges.

It was previously thought that these investigations would focus primarily on Trump allies like Rudy Giuliani refer, the newspaper continued. But prosecutors are clearly more interested in Trump’s actions than previously thought. In addition, Justice Department investigators received phone records from key Trump administration officials back in April, the newspaper wrote.

The Department has not yet launched a formal criminal investigation into Republican Trump over the events surrounding the 2020 presidential election and the January 6, 2021 attack on the Capitol.,Trump was present at public hearings by the Capitol Attack Committee in the past few weeks heavily incriminated by numerous witnesses.

The body itself cannot take legal action – this is the responsibility of the Ministry of Justice. “We intend to hold accountable anyone found criminally responsible for the events surrounding January 6 or for any attempt to obstruct the lawful transfer of power from one government to another” Garland told the broadcaster NBC on the question of whether investigations against Trump were also in the room.

About the committee of inquiry, which is currently investigating the violence and is particularly targeting the role of the ex-president and his staff, Trump said during his appearance on Tuesday: everything this corrupt establishment is doing to me is to maintain their power and control over the American people. They want to harm you in some form.

They really want to harm me so I can’t work for you anymore. And I believe not that that’s going to happen.

Donald losing support among Republican supporters. In a poll commissioned by the US broadcaster CNN, 55 percent of those questioned spoke in favor of another presidential candidate as Trump. In February, the value was still 49 percent.

He repeatedly hints at a possible candidacy, but the 76-year-old has not yet officially declared his position.,Even during his first appearance in the US capital Washington since leaving the White House, Trump has only hinted at it again on Tuesday.

D.T. said in a speech to the conservative think tank America First Policy Institute that he won his first presidential candidacy in 2016 and did “much better” in his second candidacy in 2020. “We may just have to do it again,” added the 76-year-old Republican.

His successor Joe Biden is losing significant support among supporters of his party for running again in the 2024 election. According to the poll, 75 percent of Democratic voters polled believe that someone other than Biden should run for the party’s presidential nomination.

In the winter, just over half of those surveyed felt the same way . The results of the survey were released on Tuesday (local time). The 79-year-old Biden, on the other hand, repeatedly emphasizes that he wants to compete again should his health allow it.,A large majority of all respondents (79 percent ) believes that Trump’s attempts to stay in power after losing the 2020 election were illegal or at least unethical.

More than three-quarters of respondents (77 percent) said Donald could have done more to stop the violence at the time . 1,002 people took part in the representative survey by the SSRS institute between July 22nd and 24th. The survey of supporters of the two major US parties has been conducted since 2017.