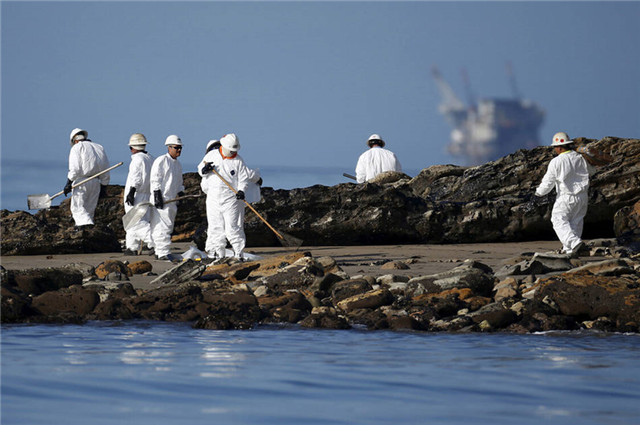 “A Large Oil Spill In Southern California” USA Coast Guard announced on the 8th that an underwater pipeline in Southern California is likely to have been a pipeline hit by anchors in the past few months to a year, leading to a large-scale spill of tens of thousands of gallons of crude oil in recent times.

Head of the Coast Guard’s Investigation and Analysis Office, said that his office obtained video evidence that the pipeline hit caused Large Oil Spill was likely to have been damaged “a few months to a year ago”.

Newbauer said the video showed a 13-inch-long crack in the damaged part of the pipeline. The pipe was previously wrapped in concrete, but it was intact a year ago. But later it was dragged 105 feet away from the bottom of the sea.

“There may have been an anchor drag accident in this part, and since then, the cracks have increased significantly.” He said, “This allows us to focus on at least a few months to a year ago.”

Beta Offshore, which operates the pipeline, said recently that it observed “oil reservoirs” 4 miles off the coast of Southern California for the first time and notified the Coast Guard.

Officials initially estimated that the amount of oil spilled might be as high as 144000 gallons. However, the authorities said on the 7th that the oil spill may be less than 3 thousand gallons.

The Associated Press reported on the 7th that authorities are investigating a huge cargo ship moored nearby before the pipeline broke down.

California Governor Newham has declared a state of emergency in Orange County to help cope with the rescue work.

The Associated Press reviewed more than 1 thousand reports submitted to federal regulators, and found that at least 17 accidents on pipelines transporting crude oil or other dangerous liquids since 1986 were related to anchorages.