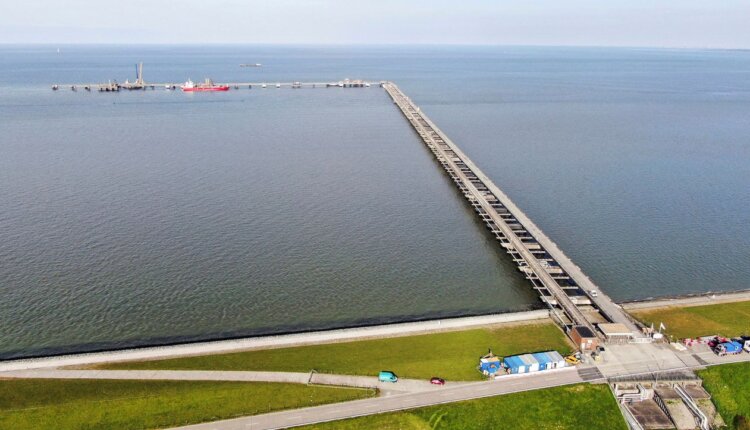 Germany is to have a fifth state-rented terminal for landing liquefied natural gas (LNG) located in Wilhelmshaven. This was announced by the Federal Ministry of Economics on Thursday in Berlin.

It is scheduled to start in the winter after next, i.e. 2023/2024. At the same time, the possibility of landing green hydrogen should be created. In the so-called electrolysis, water is split into hydrogen and oxygen, with green hydrogen this is done with the help of green electricity.

“By importing liquefied natural gas, we are making ourselves less dependent on imports of Russian pipeline gas,” said Economics Minister Robert Habeck (52, Greens). “At the same time, we are building up the landing of green hydrogen in parallel, making Wilhelmshaven an important landing point for safe and sustainable energy in Europe.”

In view of the increasingly uncertain Russian natural gas deliveries, the federal government is pushing ahead with the import of liquefied natural gas. So far, however, the necessary import terminals have not been available. LNG is frozen at minus 162 degrees, transported in liquid form by ship, landed, heated, regasified and then fed into the networks.

According to the ministry, the special ship has a capacity of at least five billion cubic meters per year and is scheduled to go into operation in the fourth quarter of next year, i.e. between October and December. The owner, the company Excelerate, is said to operate the ship together with a consortium of Tree Energy Solutions (TES), Eon Green Gas and Engie.

The floating liquid gas terminal will be chartered for five years, but should only be operated until the hydrogen terminal is up and running, said Habeck. According to the consortium, this should probably be the case in the course of 2025, according to its ministry.

So far, plans for four state-chartered LNG terminals were planned. Two floating systems in Wilhelmshaven and Brunsbüttel are scheduled to go into operation at the turn of the year with a pipeline connection for onward transport.

The two terminals in Brunsbüttel and Wilhelmshaven are to be operated by RWE and Uniper. In order to fully utilize the terminals, EnBW and the EnBW subsidiary VNG will also be on board from the turn of the year 2023/2024 until the end of March 2024.

From autumn, all end customers should pay a surcharge to save ailing energy companies like Uniper. However, companies also want to benefit from this that are doing well.

In order to prevent this, according to SPIEGEL information, they should have to prove that they also need the levy economically. Specifically, according to the government’s plans, the money should only be available if Ebitda is negative. In other words, earnings before interest, taxes, depreciation and amortization must be in the red.

” reported on this supplement. The medium writes, citing government circles, that companies should have to “prove their economic needs for the period in which the gas levy is collected from October 2022 to March 31, 2024”.

wants to use this additional hurdle to improve the controversial gas levy. The Green politician had previously defended the instrument against criticism – and named several criteria with which free riders should be ruled out. So companies that want to benefit from it should

have a relevant share in the security of supply in Germany, do not make high profits from other business areas such as the operation of coal-fired power plants, they are also not allowed to distribute bonuses and dividends.

The federal government now wants to pass a new regulation in two weeks. Secretary of State for Economic Affairs Patrick Graichen announced at a special meeting of the Bundestag Committee for Climate Protection and Energy that the change in the gas price adjustment regulation should be decided in the cabinet on September 14.

politician Michael Kruse meanwhile asked Habeck to quickly provide legal certainty create. “I expect Minister Habeck to speed up the timetable for changing the gas levy so that it can come into force before October 1st,” he said.

After the first day of the closed meeting of the Federal Cabinet at Schloss Meseberg, Habeck said: “I think that with these measures we will prevent companies that make profits from making further claims against the levy.”

With the levy, from October onwards, consumers should bear a large part of the extra costs that gas importers are currently incurring because Russian deliveries are missing and the companies have to procure gas elsewhere for significantly more money.

The resulting additional costs are to be reimbursed to 90 percent of the companies from October. Specifically, gas customers should therefore pay around 2.4 cents per kilowatt hour from October. This should prevent company bankruptcies and ultimately delivery failures.