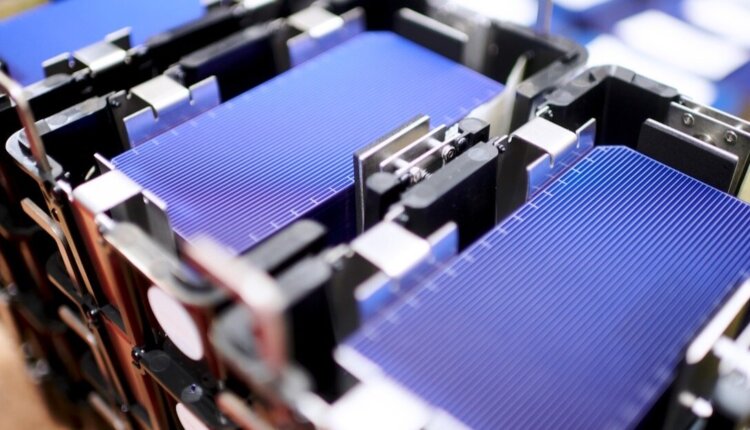 “With the delivery of the first quantities of wafers from European production, Meyer Burger is closing the last gap in the strategic reconstruction of a European supply chain for the production of solar cells and solar modules,” says Daniel Menzel, Chief Operating Officer at Meyer Burger.

Meyer Burger only revealed that the number of wafers contracted from Europe was a “significant proportion”; the company did not provide any information on the delivery period. They are already talking about expanding wafer deliveries for the coming years in line with Meyer Burger’s growth plans.

Wafers from Europe have small CO2-Footprint

The polysilicon used to manufacture the wafers comes from European and American production. Thanks to Meyer Burger’s patented heterojunction/SmartWire technology, which is used in solar cell and solar module production, the wafers could be thinner than in conventional solar cells. In addition, low-CO2 primary energy is used for the production of polysilicon and monocrystalline silicon – hydropower, for example, in production in Norway. As a result, the European wafers would have a particularly low CO2 footprint.

Supply chain is a critical factor for solar panel Production

As part of its global multi-sourcing strategy, Meyer Burger already procures a proportion of key components such as solar glass, foils, cell connectors, chemicals and process gases for solar cell and solar module production in Europe. However, Menzel emphasizes that the advantages of global supply chains will continue to be used. However, there are clear and unambiguous requirements for social, ecological and economic sustainability.

Since the company repositioned itself as a module producer in 2020, it has been working on building resilient supply chains. Meyer Burger continuously monitors the strategic independence of its supply chains and adjusts them if necessary. This should prevent bottlenecks in production and ensure the company’s growth. At the beginning of August, Meyer Burger reported reduced production and a delayed start-up of its new production facility . The reason was missing components.

The company produced 108MW photovoltaic components in the first half of 2022, and the output is expected to be 210MW to 260MW in the second half of the year.

Meyer Burger also recently announced that it will further increase its annual production of photovoltaic batteries and components in Germany to 1.4GW. The company said that its first production line with an annual output of 400MW has been deployed, and the expansion of other production lines is expected to begin in September this year. According to Meyer Burger’s expectations, this means that the annual production capacity in 2023 will be 1.0GW to 1.2GW, compared with the company’s original forecast of 1.35GW.

Meyer Burger said that the demand for heterojunction photovoltaic cells in Europe and the United States is still very strong. Despite the high average sales price, the higher cost of material procurement has been passed on to customers. The allocation of customer quotas in the second quarter of 2023 is currently under way. Due to limited production, this distribution is necessary.

Meyer Burger initially focused on the growing household photovoltaic field with high profits, hoping to provide 30% of its production to large segments by 2030. However, the company said that by 2023, almost all expected sales will enter the rooftop photovoltaic market.

Perovskite developer Oxford PV and Heterojunction (HJT) solar energy manufacturer Meyerberg began to solve the difficult lifting of the cooperation – at least in terms of the “exclusive cooperation” between the two companies in the commercialization of perovskite series photovoltaic technology.

Many people believe that perovskite series equipment represents the future of high-efficiency photovoltaics, and this change may seriously disrupt the commercialization of the technology in Europe. Oxford PV announced the termination of the cooperation on Friday, and Meyerberg said yesterday that he was “seeking legal ways” to deal with this change.

The end of the “exclusive cooperation” is not expected, because the partnership seems to have a firm foothold – especially because Meyer Burger has invested a lot in Oxford PV. “This somewhat surprises me,” said Alex Barrows, director of research at Exawatt, a photovoltaic manufacturing consulting company.

From the perspective of outsiders, their cooperation seems to fit well: OxfordPV seems to focus on making perovskite on HJT, rather than using cheaper and lower-efficient bottom batteries, and Meyerberg is undoubtedly in the lead in HJT manufacturing.

Oxford PV attributed the strategic decision behind the termination of cooperation to the transfer of Meyer Burger to manufacturing – after the cooperation between the two companies in March 2019. According to the original cooperation agreement, a 200 MW H.J.T/perovskite series production line should have been built, which also involved Meyerberg’s acquisition of 18.8% of Oxford PV. The deal also includes Meyerberg’s plan to double his investment by the end of 2020, which does not seem to have been adopted.

Announcements made when the “exclusive cooperation” were reached in 2019 included the following statement: “In addition, Meyerberg will also develop equipment for the large-scale production of perovskite sediment on the top of the battery at the bottom of the silicon heterojunction.” Although the two companies have not provided more specific details about the cooperation to us, this may be the place where the cooperation failed.

Meyerberg’s HJT production line is used to produce double crystalline silicon (a-Si)/amorphous silicon (a-Si) batteries based on the PECVD (plasma-enhanced chemical vapor deposition) process. Before deciding to manufacture its own H.J.T module, it provided such a production line to Singapore-based REC – one of the highlights announced in June 2020. However, the PECVD process is not often used in perovskite deposition. The perovskite coating can be completed in many different ways.

It can be evaporated, or some form of printing, spraying or coating can be carried out before annealing,” said Barrows of Exawatt, who has a doctorate majoring in new photovoltaic materials and sedimentation methods. However, if OxfordPV currently uses [perovskite semiconductor] sputtering coating, it may be meaningful to cooperate with experts in this field, such as Von Ardenne or other mature suppliers in the film field.

Oxford PV can work directly with sputtering or thin film deposition experts instead of Meyerberg.

Although Meyerberg and OxfordPV both confirmed that the former is providing a “turnkey production line” for the latter’s production in Brandenburg, Germany, Meyerberg is unlikely to make his own perovskite sedimentation tools. On the contrary, it is likely to cooperate with third-party equipment suppliers – this form is common in turnkey photovoltaic production line supply. OxfordPV told that its perovskite production process is based on sputtering coating.

As far as the perovskite process is concerned, the preparation of the Oxford PV German plant is controversial to a certain extent. Oxford PV last week that everything except for one necessary tool is ready. But Meyer Burger said that there is still a long way to go from production.

Today, the Swiss photovoltaic technology company stated: “Meyerberg’s assessment was and is, and it is, perovskite series technology will only achieve the technical and process maturity, product reliability and cost structure necessary for competitive mass production within a few years.”

The way the two companies communicated the decision of Oxford PV to terminate the agreement is also disputed – Meyerberg claimed that he learned about the move through public disclosure.

“From a strategic point of view, this seems to give Meyerberg a headache, at least assuming that the company uses perovskite/HJT series as the key pillar of its technology road map,” Barrows said. In the past, many development of perovskite seemed to be outsourced to Oxford PV. Now, Meyerberg is likely to have to do more internally. It is not clear who owns the details of which IP [intellectual property], so it is difficult to say how much setback it will be, but I can imagine that this may delay Meyer Burger entry into this field.