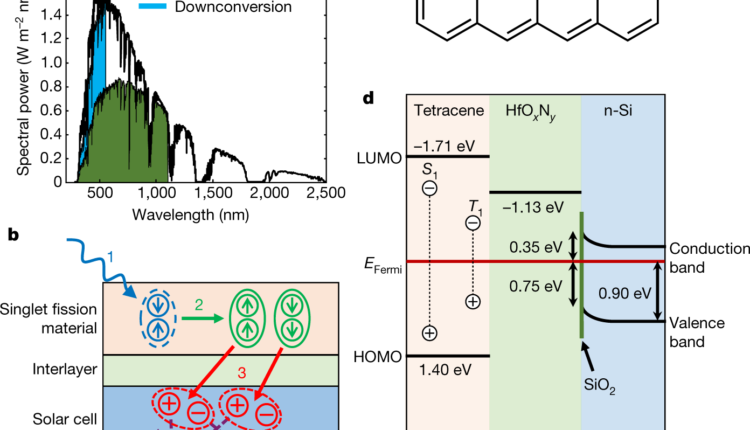 New solar cell technology can help solar energy be produced more efficiently by using single-line fission and series solar cells,”Researchers from the School of Photovoltaic and Renewable Energy Engineering and the Center for Exciton Science of Excellence at the University of New South Wales in Australia”, while helping to reduce operating temperatures. Extend the service life of equipment and introduce a new paradigm for the development of the new generation of solar energy technology.

Tandem batteries can be composed of new compounds such as silicon and perovskite nanocrystals, which have larger band gaps than silicon, which helps the equipment capture more solar spectrum for power generation.

The best solution for traditional solar cells is that each photon produces an electron as a carrier of electrical energy. The electrons produced under single-linear fission technology are twice as high as in traditional cases, that is, one photon excites two electrons. The equipment to achieve single-line fission contains tetrabenzene, which can transfer the energy generated by single-line fission to silicon.

This time, the researchers’ work highlights some key advantages of series batteries and single-line fission. Researchers show that silicon/perovskite series batteries and tetrabenzene-based single-line fission batteries can operate at lower temperatures than traditional silicon devices. This will reduce the impact of heat loss on equipment, extend the service life of equipment, and reduce the energy cost of equipment production.

For example, the working temperature of the module is reduced by 5°C-10°C, which is equivalent to an increase of 2% to 4% in annual power generation. It is usually found that for every 10°C reduction in temperature, the service life of the device will double. This means that the lifespan of tandem batteries has increased by 3.1 years, and the lifespan of single-line fission batteries has increased by 4.5 years by New solar cell technology.

In addition, there is another benefit of single-line fission batteries. When tetrabenzene inevitably degrades, it becomes transparent to solar radiation, allowing the battery to continue to function as a traditional silicon device.

Dr. Jessica Yatje, the lead author of the study, said: “The commercial value of photovoltaic technology can be achieved by improving energy conversion efficiency or extending the operating life. The former is the main driver of the development of the next generation of technology, while (before) people have hardly considered the latter, that is, the potential longevity advantage.”

World need more New Solar Cell Technology research and updates which will affect plans of upcoming projects also as we already touching results of Global warming , floods , high temperatures and more … It’s time to move and act against Global warming by powerful plan and all countries help each other to safe earth.

4.  Work together to deliver

It is not enough but it’s a step which should followed by a global ACT not just another model same as 2016 which didn’t help much , according to west Germany, Belgium and China situations we would see strange 2021 winter too, what is your opinion if all countries try act same as Uruguay model of energy transformation into renewable energy?