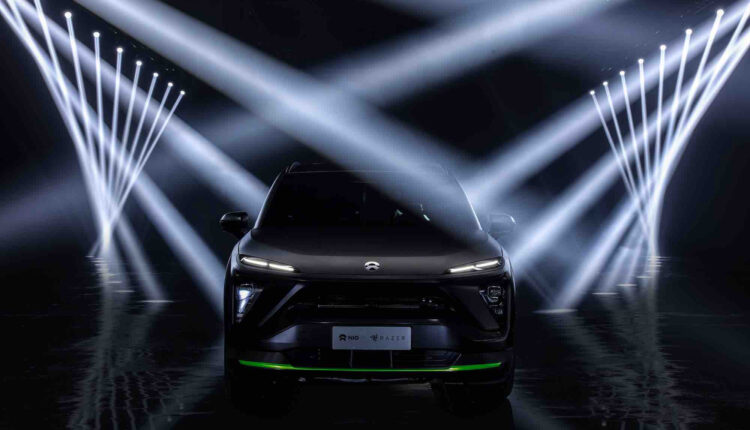 Lin Wenqin, the founder of Meiyihao Company (NIO NextEV), passed away in a car accident when driving NIO ES8 triggered heated discussion on the Internet, which also made NIO cars and self-driving stand at the forefront again.

NIO NextEV, On August 14, the personal public account certified as “Meiyihao” issued an obituary saying that at 2:00 p.m. on August 12, 2021, Lin Wenqin (nicknamed “Cute Swordsman”), founder of Shangshan Ruoshui Investment Management Company, founder of Yitong World Catering Management Company and founder of Meiyihao Brand Management Company, drove Weiwei After the ES8 car turned on the self-driving function (NOP pilot status), a traffic accident occurred in the Hanjiang section of the Shenyang-Haihai Expressway. He died at the age of 31.

In response to the above-mentioned accident, the relevant staff of NextEV responded to The Paper that NIO’s NOP (Navigate on Pilot) is not an autonomous driving, but only a pilot auxiliary function. The cause of the accident is under investigation, and the relevant information will be released later.

Zhang Bo, general manager of NIO Xiamen Regional Company, posted on NIO Auto App: NIO is cooperating with the local traffic police to investigate the accident and assist the family in dealing with the aftermath. Li Bin, founder of NextEV, and Qin Lihong, co-founder and president of NextEV, also expressed condolences on the death of Lin Wenqin on NextEV App.

On the evening of the 15th, Mr. Zheng, a friend of Lin Wenqin, told The Paper that the investigation of the accident by the transportation department was still unconclusive. On the morning of the same day, the traffic police detachment of Fujian Putian Expressway confirmed the matter in an interview with CCTV and said that it was currently under investigation. The police said: “This accident was caused by Lin Wenqin driving a NIO car rear-end the car in front of him. The accident caused serious damage to the vehicle and needs to wait for further investigation results.”

It is worth mentioning that the accident suspected of “automatic driving” is not the first time, but involves many car companies.

On August 4 this year, the owner of Great Wall Haval H9 did not recognize the truck when using ACC adaptive cruise and rear-ended. In the same month, netizens said that the test drive Xiaopeng G3 did not recognize the vehicle in front of it when using ACC adaptive cruise. Last June, Taiwan media reported that Tesla Taiwanese owners used assisted driving. Encay a white truck, earlier, foreign media reported many times that Tesla owners caused accidents due to the use of assisted driving.

Driving data release: assisted driving was used before the accident

Whether the accident was triggered by “automatic driving” has become the focus of attention. The online accident map shows that the accident car NIO ES8 first hit a pile barrel on the roadside, and then hit a highway maintenance vehicle located in the fast lane. As a result, the maintenance car rolled over and the ES8 was seriously damaged.

According to Mr. Zheng, the accident occurred or directly crashed because the ES8 driven by Lin Wenqin failed to successfully identify the highway maintenance vehicle when turning on the NOP function. Mr. Zheng also confirmed to the reporter that the vehicle was in an assisted driving function at the time of the accident: “When the traffic police asked NIO to explain the vehicle information, the engineers at NIO’s Shanghai headquarters had called the person in charge of NIO’s Fujian Minnan District to confirm that the vehicle Lin Wenqin was driving on the highway at the time of the accident. Driving status.”

Mr. Zheng issued a video to The Paper reporter recording the relevant information about Lin Wenqin’s accident car in the NextEV App.

The NOP pilot assistance function suspected to have involved in the accident was officially launched by NIO in October last year.

The main coverage scenarios include automatic integration into and departure from the main road according to high-precision maps and environmental perception; cruise driving on the main road and intelligent selection of the optimal lane, automatic switching of the next high-speed or elevated road, support in-ramp change and speed regulation.

In terms of NOP pilot assistance, in October last year, Zhang Jianyong, head of the unmanned system engineering department of NIO Automobile, released the NOP pilot assistance guide on NIO App that using NOP requires turning on the “navigation assistance” function switch, which can only be used in the navigation state.

After the owner of the pilot auxiliary section marked by the small blue icon on the control screen during driving, he can press the Pilot button on the left side of the steering wheel to try to activate NOP. Vehicles will continue to judge whether they can enter the NOP state based on map information and road conditions (such as whether lane lines are recognized, etc.).

It is worth noting that Zhang Jianyong has repeatedly reminded car owners to use NOP cautiously in the guide. For example, during the activation of NOP, the owner must hold the steering wheel tightly to ensure complete control of the vehicle. He also boldly reminded the owner at the beginning of the guide: “It must be emphasized again that NOP must not be equated with self-driving.

Like Pilot, NOP is still an assisted driving feature and may exit at any time without meeting working conditions.” Zhang Jianyong also said that when using, car owners must always pay attention to traffic conditions and road environment. For some users who are not experienced in using the automatic assisted driving function, please try to use NOP after becoming familiar with the Pilot function. In addition, due to the diversity and complexity of road conditions, NOP will be in the continuous optimization stage for a long time.

In the process of using NOP, if the owner finds that the traffic condition, road environment or vehicle condition is not suitable for using NOP, or some unexpected acceleration, deceleration, lane change, etc., please take over the vehicle immediately.

The user guide also suggests that the normal operation of NOP depends heavily on the state of sensors such as cameras and millimeter-wave radars. If you find that the vehicle indicates that the sensor is limited, or suspect that the sensor is abnormal, please do not use NOP and seek after-sales service support as soon as possible. In addition, NOP is currently unable to respond to people, animals, traffic lights and static obstacles (such as high-speed toll stations, roadblocks, triangular warning signs, etc.). If there is an accident, construction area, temporary road closure, etc. in front of the route, the owner is requested to take over the vehicle immediately.

Under the definition of the International Institute of Automotive Engineers (SAE), self-driving is divided into six levels: L0-L5. Only when the L4 level or above can it begin to get rid of human intervention. The industry also recognizes that L4 or above is the real self-driving, and below L4 level is called assisted driving.

In the Automobile Driving Automation Classification released by the Ministry of Industry and Information Technology of China last year, the driving automation level is divided into level 0-5, which is only started to be called conditional automatic driving, and below level 3 is considered to be assisted driving. At present, the “automatic driving” carried by vehicles on the market is basically still below L1, L2 or below the national standard, that is, assisted driving. Drivers still need to detect and respond to targets and events. In other words, the driver is required to take over the vehicle at any time and is fully responsible for driving the vehicle.

According to The Paper, NextEV has not provided enough education or explanations on car owners about assisted driving functions, such as making teaching videos or using guides, but only has relevant explanations during test drive and vehicle delivery.

In May this year, Tao Lin, Tesla’s global vice president, said in an interview with Xinhua News Agency that there was a need to strengthen consumer education. We need to cooperate with the driving school and transportation department, constantly use some technical methods on the end of the car, so that everyone can understand the use of the new car, and then avoid misoperation in the use process, or other problems caused by some lack of functional understanding.

However, some car companies have begun to educate car owners. After January this year, if the owners of Xiaopeng Automobile want to use NGP automatic navigation to assist driving, they must watch the video of the introduction of the function (unable to fast forward) on the Xiaopeng App, and pass the exam, otherwise they cannot turn on the above functions; Ideal 2021 Ideal ON When E is delivered, it will be handed over to the owner in the pick-up link to the car. After activating the vehicle, the owner must watch the video of the auxiliary driving function to turn on the auxiliary driving function.

As a product of high-tech technology, self-driving has not kept up with relevant regulations before. And on the day of Lin Wenqin’s traffic accident, China issued policy opinions on the supervision of self-driving. On August 12, the Ministry of Industry and Information Technology issued the Opinions on Strengthening the Management of Intelligent Networked Automobile Production Enterprises and Product Access (hereinafter referred to as the Opinions), which contains many provisions on the safety of self-driving.

Opinions stipulate that the safety management of self-driving functional products should be strengthened. When an enterprise produces automobile products with automatic driving function, it shall ensure that the automobile product meets at least four requirements: it should be able to automatically identify the failure of the automatic driving system and whether the design and operation conditions continue to meet, and be able to take risk mitigation measures to achieve the minimum risk state.

It should have human-computer interaction function to display automatic The operating status of the driving system; it should have an event data recording system and an automatic driving data recording system to meet the relevant functions, performance and safety requirements, and are used for accident reconstruction, liability determination and cause analysis; it should meet the process guarantee requirements such as functional safety, expected function safety, network security, and simulation simulation, Closed site, actual road, network security, software upgrade, data recording and other test requirements to avoid predictable and preventable safety accidents within the design operating conditions of vehicles.