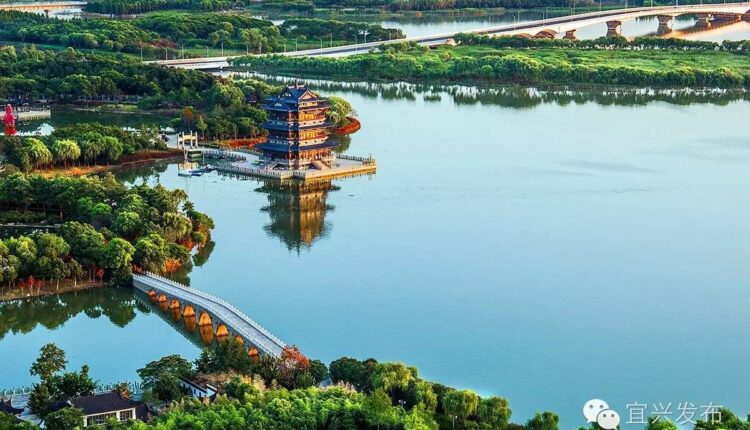 In Yixing, Jiangsu Province, the optimization of rural ecological space has become an important focus of rural revitalization. Through overall planning and highlighting advantages, the locality has realized the protection and utilization of important ecological resources in rural areas.

In the south is a piece of mountains and forests, and in the north is a lake and water town and fertile farmland – open the map of the city, you can see: Yixing, Jiangsu Province, located on the shore of Taihu Lake, is like an ink painting of “three mountains, two waters and five fields”, and the landscape resources are very rich.

Mountains and rivers are also an important advantage and characteristics in promoting rural revitalization by the local government. Through the overall planning of rural ecological space, it is appropriately sprinkled and left blank in this picture scroll to outline the unique charm and style of Jiangnan Water Township…

Standing in Jinlan Village, Fangqiao Street, Yixing, you can look at the industrial concentration area in the east, with many factories. In the north, along the rivers such as Jiang Shigang and Li Shayu, there are 27 village groups, which are hooked up with black asphalt pavement and colored street lamps, and red maples and camphor are planted in front of the house and behind the house.

“More than ten years ago, the village was not like this.” Deng Xiaohua, a 65-year-old villager, recalled that in the past, there was no decent road in the village. The villagers were covered with dust on sunny days and mud on rainy days. The scattered farmland in various families were abandoned in large quantities, and half of the young people went out to work so green path needed as solution.

“The environment is not good, people can’t keep, and the industry is not good; without industry, lack of popularity, and the environment is worse. This is a vicious circle – we must solve the problem in the layout of rural space.” Jiang Zhongliang, Secretary of the General Party Branch of Jinlan Village, said that since 2003, he has taken the villagers shoulder to shoulder, and strived to create a more attractive village appearance from repairing roads, infrastructure and cleaning up sanitary dead corners.

On this basis, Jinlan Village has sorted out the texture of the countryside and re-planned the spatial layout. Over the years, it has mainly done two major events. The first is to dismantle the abandoned and dilapidated farmhouses located in the eastern part of the village in an orderly manner, use idle land or land to replace them, establish industrial concentration areas, introduce machinery, automobile materials and other township enterprises, some villagers to settle in the town, and some villages to concentrate in the west. At present, the whole village of Jinlan Village has settled in 54 enterprises with annual sales of 1.1 billion yuan. More and more young people are attracted back to their hometowns to work in enterprises.

Another is that since 2014, the city has taken the lead in establishing a village-run cooperative. Nearly 400 farmers have invested 2,780 mu of land in the contract right, and the small field has become a big field. Cooperatives carry out green planting and unified management, and have also developed rice processing production lines. Modern agriculture has developed vigorously.

“After the land is transferred, I went to the cooperative for field management. In addition to dividends, I can also work to earn money. The annual income is more than 60,000 yuan, more than double that of the past.” Deng Xiaohua, a villager, said that in front of the house is Jiang Shigang’s ecological barge, behind the house is a thousand mu of fertile land blowing wheat waves. There is also a fitness and entertainment square and a comprehensive service center in the village. Nowadays, work is like a scenic spot and life is like a garden.

Wang Yufeng, head of the Space Planning Section of Yixing Natural Resources and Planning Bureau, said that the function of the countryside is first of all the production base of grain and other agricultural products, which should shift to green organic and ecological production methods. Secondly, the countryside is the living place of the majority of villagers, so that villagers can have a healthy and livable living environment. In addition, the village also bears As an ecological background, it provides ecological products for the region.

“In Jinlan Village, these are the directions we strive for.” Jiang Zhongliang said that Jinlan Village promotes the continuous adjustment of production space and living space through the optimization layout of ecological space, forming a virtuous circle of rural development, which has driven the prosperity of agricultural industry and the improvement of the living environment as a “Green Path” path term.

On the edge of Taihu Lake at the entrance of the aquatic natural village, several boats lined up. Xu Rongfa, 60 years old, is guiding the workers to the salvage point for inspection. Xu Rongfa said, “We use a combination of man-machine, which is usually automatic machine salvage, and the corners, reeds or emergency salvages can be manually launched.”

The boat was transformed by the fishing boat, and the radius of life had not changed. Xu Rongfa worked on the water for half his life – first he was raised in the fence in Taihu Lake, later changed to lake surface fishing to control the water environment, and now he has become the “Captain Xu” of the blue algae salvage team.

Zhoutie Town is close to the west bank of Taihu Lake, with a narrow and long distribution. At the beginning of this century, chemical industry and breeding were the “two legs” of local development. There are more than 300 chemical enterprises in the town; in various aquaculture villages, fishermen make a living by fences and fishing. Starting from 2007, Zhou Tiezhen re-layed out the land and space planning, forcing a new development path of “elimination of backward production capacity + priority for ecological restoration + green transformation of industrial structure + co-construction, co-governance and sharing of ecological civilization”.

This transformation has formed the “one increase and one decrease” of town and village space. Between the increase and decrease, it is for ecological calculation.

Chen Zhongqiang, Secretary of the Party Committee of Zhou Tiezhen, said that on the one hand, we should continue to promote the “dechemicalization action”. Up to now, a total of 149 chemical enterprises have been closed down in the town, reducing annual taxable sales by more than 5 billion yuan and tax revenue by more than 200 million yuan, and vacated more than 2,250 mu of chemical land.

On the other hand, the project of controlling source and intercepting pollution and returning the lake to the lake has been implemented, and 300 aquaculture households in the 3-kilometer buffer zone along Taihu Lake have been rectified, involving more than 4,060 mu of fish ponds, 134 large-scale livestock and poultry farms have been closed and remediated, and the water area of the lake has exceeded 3,000 mu.

Space has been freed up, where does the new development come from?” You also need to walk on ‘two legs’. Chen Zhongqiang introduced that the first transformation was aimed at the mechanical equipment industry. Within the land space of 73.2 square kilometers in Zhoutie Town, a number of leading enterprises in the industry have gathered. At present, there are nearly 300 machinery and equipment production enterprises in the town.

The second transformation is to develop the cultural tourism industry. The Dayuhuawan Cultural Tourism and Health Project with a total area of 8,828 mu was vacated from 15 chemical enterprises and began construction at the end of last year. The goal is to create a “new engine” of Taihu ecological protection and an “upgraded version” of cultural tourism.

Captain Xu’s future home has also been planned on the drawings and will be built in the scenic spot. According to the spatial layout, 626 demolition farmers, including landed fishermen, will live in 150 mu of resettlement communities in the south of Dayuhuawan scenic area and work in various positions in the scenic area. At that time, the eyes will be full of lakes, mountains, clear water and green shores!” Xu Rongfa said. According to the introduction, the Dahuawan project was signed in October last year and is currently in the planning and construction stage, which is expected to take about six years to complete.

Mountains and forests: Green path and beautiful scenery chained together

From the air, on the east line of Zhangye Town in the southern mountainous area of Yixing, there is a “green path” with a total length of nearly 20 kilometers and composed of the Sichuan Shanlong line-Shanlong line and Shanlin line, like a necklace, stringing the characteristic village attractions such as Harmony Five Holes, Butterfly Dance Upper East, and Anyi Shiluo along the route. Zhu Xiang, a backpacker from Nanjing, rode along the way and played for three days and was still not satisfied.

This “green path” is called “Beautiful Countryside Demonstration Belt”. There are four in Zhangyu Town: the eastern Liangzhu Amorous Culture and Cultural Movement Belt, the southern Yaohu Town Sojourn Leisure Belt, the Western Zen Residential Agricultural Experience Belt, and the Central Peach Blossom Accumulation Fragrance Belt. Since 2018, it has been built in sections according to local conditions, covering 13 lines. Zhengcun, 129 natural villages, driving the development of 175 square kilometers and 75,000 people.

There are many beautiful villages and rich tourism resources in Yinan Mountains. What is the role of “green path”?

“The naturally grown countryside is not scientific and rigid enough to implement spatial planning due to the limited level of economic development or insufficient industrial import role.” Zhang Min, Secretary of the Party Committee of Zhangye Town, said that for example, the roads between villages are narrow and different in orientations. Because of the lack of planning, it is impossible to build roads and vehicles are inconvenient. On the other hand, due to the lack of planning, there will even be homogeneous competition between villages, which limits the potential of rural tourism to integrate resources in a larger space. .

Zhang Min continued to explain that the construction of the “green path” is to systematically build the previously fragmented villages, turning the separate construction of each village into a continuous overall development.

Today, the rebuilt Wudong Village grows on the “green path” and integrates into the industry: the farmhouse is decorated between the mountains and rivers, with complete supporting facilities and surrounded by fruit trees; farmers run homestays and farmhouse music, so that the natural scenery can extend to the front and back of the house.

Spring has flowers, summer has shadow, autumn has fruits, winter has green… Four “green paths” are connected with mountains, rivers, cities and forests, opening up rural space. Zhangye Town has also become the first batch of pioneer demonstration areas for urban and rural development integration in Wuxi. Its villages have won national ecological villages, the most beautiful villages in the province and other honors.

Same Green Path term is really important for most of cites and countries which share same situation.