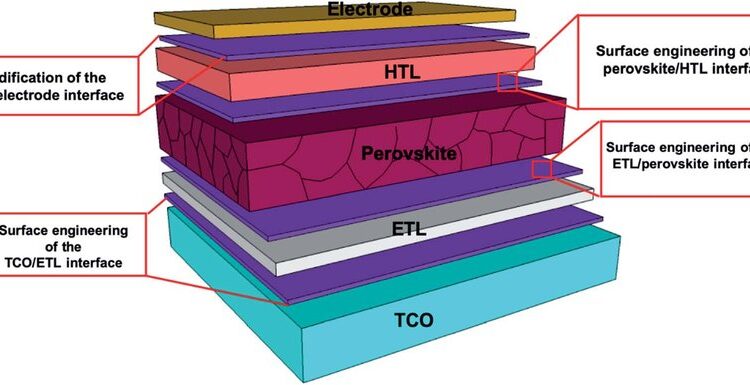 Especially in the field of solar cells, the energy conversion efficiency of solar cells based on organic-inorganic perovskite materials has increased from 3.8% to 25.5% since it was first reported in 2009.

However, due to the existence of organic ions (MA+, FA+, etc.), the stability of organic ions has always been the focus of the commercial development of photovoltaic devices.

How to improve the stability of perovskite thin film materials while maintaining excellent photoelectric properties is a key technical problem to be solved urgently.

The research shows that by using fluoride molecules (CF3-PEABr) to modify the perovskite interface to form low-dimensional perovskite, the interface defect state can be effectively passivated and the crystalline quality of the film can be improved.

Based on density functional theory, the state density, defect formation energy and ion migration energy of different defect structures are calculated, and the influence of CF3-PEABr passivation on the microphysical characteristics of perovskite is studied and analyzed (Figure 2).

Although the hydrophobic properties of the trifluoromethyl group can improve the stability of the film, it also leads to discontinuity of the PC61BM electron transport layer on the perovskite layer, affecting the performance of the device.

At the same time, because surfactants contain hydrophobic long chains and hydrophilic groups respectively, the hydroxyl group at the end can be in contact with trifluoromethyl on the surface of perovskite film through hydrogen bonding or electrostatic action to achieve effective charge transmission and extraction, thus realizing high-performance perovskite solar cell devices.

When the device is placed in air (humidity ~35%) for 1,000 hours, its device performance can still maintain 98% of the initial efficiency. Compared with the Control device, its device stability and thin film stability have been significantly improved (Figure 3).

In this study, an effective fluoride passivation strategy is proposed to improve the stability of thin films and devices. At the same time, the surfactant Triton X-100 is introduced to solve the difficult problem of discontinuity of the electron transport layer caused by the hydrophobic interface of perovskite thin films, and realize efficient and stable trans perovskite solar cell devices.

The passivation strategy and surfactant doping in this study have good universality, which provides a new idea for the development of efficiency and stability of trans perovskite devices, which is expected to be applied to the research of fully printed perovskite solar cells.

Quanzhou successfully applied for heritage. The total number of world heritage sites in China has reached 56