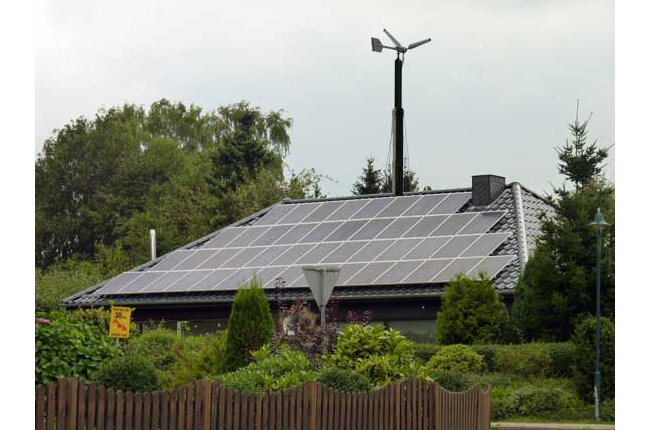 Technology trends in wind energy Large wind turbines are now established technologies in the context of the energy transition and are in use on a large scale. Small wind turbines are often neglected, which, in connection with storage and solar systems, can make a significant contribution to the power supply from renewable sources.

Important impulses EnergyDecentral wants to deliver for the industry, which will take place from November 15th to 18th, 2022 at the same time as EuroTier at the exhibition center in Hanover.

The stormy weather at the beginning of the year set a new record in renewable electricity generation: Onshore and offshore wind turbines generated a total of 21 billion kilowatt hours of electricity in February.

Of this, 18 billion kilowatt hours were accounted for by onshore wind energy. This is the result of calculations by the Center for Solar Energy and Hydrogen Research Baden-Württemberg (ZSW) and the Federal Association of Energy and Water Management (BDEW).

“In February, wind turbines generated about as much electricity as seven million households consume in a whole year. This shows the potential of wind energy,” says Kerstin Andreae, Chair of the BDEW Executive Board. “The declining gas flows from Russia have put the energy supply in an exceptional situation.

The surest way to avoid such situations in the future is to rapidly expand renewable energies. They are the key to a green power and heat supply, an industry that produces hydrogen and climate-neutral mobility,” says Andreae, who sees an urgent need for action, especially when it comes to expanding wind energy on land.

Currently, the trend in wind turbines is mainly in the direction of larger, more intelligent and more efficient systems as a result of the high price pressure. From November 15th to 18th, 2022, EnergyDecentral will show what the state of the art is onshore or offshore when it comes to converting wind into electrical energy. On site in Hanover, the industry will be providing information about its new products and discussing the current industry trends.

The focus of interest is also on systems with a lower height, so-called small wind turbines (KWEA), which are intended to open up the potential of renewable energies to farmers and commercial operators in particular. Marcus Vagt sees a lot of interest here, because: “The global importance of small wind turbines has been underestimated so far.

The market potential is huge, the possible uses are diverse,” explains the EnergyDecentral project manager. According to the criteria of the German Wind Energy Association, all systems with a nominal generator output of up to 100 kilowatts fall into this category.

Deviating from this, the international standard IEC 61400-2:2006 (IEC 2006) defines systems up to an area of ​​200 square meters swept by the rotor as small wind turbines, which corresponds to a nominal output of around 60 to 70 kilowatts. If the systems are less than 50 meters in height, they are not considered spatially significant, so that only a building permit is required. Most small wind turbines in this country therefore do not go beyond a nominal output of 30 kilowatts, with the mast height reaching a maximum of around 40 meters.

Such systems are often operated parallel to the mains in agricultural and forestry operations. There they take over the power supply for the building and at the same time feed it into the public power grid. “Even if it is possible to pay for excess wind power, the focus of electricity use is on self-consumption,” emphasizes Vagt.

The profitability of a small wind turbine is primarily determined by the electricity generation costs, which in turn are primarily dependent on the local wind supply: the higher the wind turbine and the longer the rotor blades are, the better the system can utilize the wind energy supply – and the cheaper the kilowatt hour is.

In the run-up to an investment, one question above all arises: for how many cents per kilowatt hour can the electricity be generated and what does the company save compared to the purchased electricity? Last but not least, the expert talks, live events and specialist forums at EnergyDecentral also focus on aspects relating to financial support and the acceleration of approval procedures.

At a coastal location with strong winds, a small wind turbine with a nominal output of ten kilowatts can generate 25,000 kilowatt hours of electricity – more than twice as much as a comparable photovoltaic system. But that also means that if there is little wind, little electricity is generated. Not every farmer runs his farm in such a strong wind location.

In order to increase the reliability of the supply in regions with little wind and inland, hybrid systems are used which, in addition to wind power, also include photovoltaics with electricity storage. The energy obtained is distributed to all sectors of the energy requirement via an intelligent energy management system.

Small wind power is a lucrative supplement in months with little sunshine, especially for older photovoltaic systems, for which the EEG subsidy expires after 20 years.

Standard are systems designed as windward runners, where the rotor is on the side facing the wind. They feature a dynamic three-bladed rotor connected to a three-phase direct drive generator. The gearless drive train without a voltage booster makes it possible to keep energy losses low and noise emissions low.

Modern systems with a nominal output of ten to 30 kilowatts are optimally adapted to the requirements of wind turbines for self-supply. They also have a cloud-based remote monitoring and control system that provides 24/7 access to current and historical operating parameters.

In addition to the option of remotely switching off and restarting the system, the current weather data can be called up. The systems can be accessed at any time from a desktop, mobile phone or tablet. The turnkey basic systems in this performance class are designed in such a way that they are capable of black starts with optional additional packages and can be operated in the stand-alone grid.

A look at the EnergyDecentral solutions shows that the state of the art is wind turbines with horizontal rotor axes, which are also used for large-scale wind farms. Almost all small wind turbines certified according to IEC 2006 follow this design, which many experts regard as the ultimate in terms of efficiency and profitability. More efficient rotors are among the key technologies in wind energy. New to the exhibitors’ offerings are solutions especially for regions with little wind, which start up at wind speeds of less than three meters per second.

Such systems are a topic that Prof. Holger Seidlitz, lightweight construction specialist at the BTU Cottbus-Senftenberg and head of the research area “Polymer Materials and Composite PYCO” at the Fraunhofer Institute for Applied Polymer Research IAP in Wildau, is working on. Together with his team and a medium-sized cooperation partner, he is currently developing a wind turbine. “The main strength of the concept is that the whole system is small and yet very efficient,” emphasizes Seidlitz. It starts with the wind turbine.

The lightweight construction experts have designed a new rotor that starts to move even in the slightest breeze. “Here in Lusatia, the wind is much weaker than in northern Germany,” explains mechanical engineer Marcello Ambrosio, who oversees the project at Fraunhofer IAP. “We have adapted the design of the rotor blades and reduced their mass by around 30 percent compared to conventional small wind turbines.” Thanks to its fiber composite materials, the rotor can also withstand strong winds. The leaves are designed to bend elastically and twist out of the wind during storms.

“The system thus throttles the rotation speed by itself and is not damaged,” emphasizes Seidlitz. Complicated control technology and complex mechanics can thus be dispensed with. The rotors are currently being tested outdoors. In comparison with conventional small wind turbines, they should show what they are made of.

The generation of electricity from wind turbines will have a significant impact on the energy transition in the coming years, and not just in Germany. This poses completely new challenges for the electricity system, which by no means end with the installation and operation of the wind turbines.

From November 15th to 18th, 2022, innovations in the field of off- and onshore wind energy will be presented at EnergyDecentral, together with the presentation of business models and financing options. The exhibition center in Hanover is thus transformed into a venue for innovative and future-oriented technologies for decentralized energy generation.

EnergyDecentral is in the agricultural environment of EuroTier, the world’s leading trade fair for animal husbandry. This combination has proven itself by using synergies between agriculture and bioenergy. This covers the breadth of technological developments in the field of substrate preparation and the handling of biofuels for energy production.

The DLG (Deutsche Landwirtschafts- Gesellschaft eV), founded by Max Eyth in 1885, is an open network and professional voice for agriculture, agriculture and the food industry. Its goal is to promote progress through knowledge, quality and technology transfer.

The DLG has over 30,000 members, it is non-profit, politically independent and internationally networked.

Small wind turbines, which are installed in connection with storage and solar systems can make a significant contribution to the power supply from renewable sources.