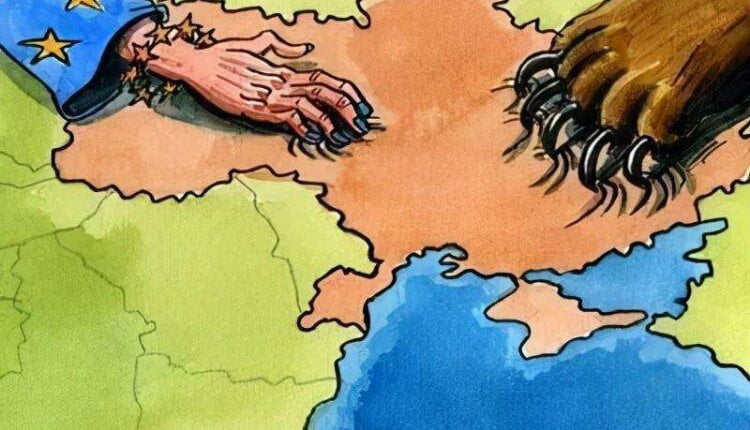 The continuous tension in Russia and Ukraine has aroused global concern. In this conflict, the United States seems to be pulling a fight, but in fact it has been fanning the flames and sowing wars inside and outside the field.

Among Russia and Ukraine, the United States, together with Western countries, took a series of sanctions against Russia, causing violent turmoil in the international market.

Weiwen, former counselor in the United States and senior researcher of the Chongyang Institute of Finance of Renmin University of China, pointed out that the beneficiaries of all earthquakes in the current global market are the United States.

The first is energy.” At present, European natural gas is mainly supplied by Russia. With the outbreak of the crisis in Ukraine, the United States can take the opportunity to cut off Russia’s natural gas transmission to Europe,” He Weiwen said. “The United States has imposed sanctions on Russia, and some natural gas pipelines through Beixi-1 and Ukraine have been blocked, which is immediately U.S. natural gas opens up the market.”

It is reported that U.S. natural gas production has been growing rapidly in the past few years. According to the U.S. Energy Information Agency, the United States became the largest source of liquefied natural gas (LNG) imports from the European Union and the United Kingdom in 2021, accounting for 26%.

The second is to strengthen the status of the dollar. He Weiwen said that every geopolitical crisis occurs, the dollar always strengthens compared with other currencies, and this time it is no exception.

“This time, the euro and the pound fell compared with the dollar, so the dollar, with its strong trend, attracted capital flows from the rest of the world, especially Europe, to the United States.”

“On the other hand, due to severe domestic inflation in the United States, the Federal Reserve has bought fewer and fewer treasury bills, so this crisis in Ukraine has led to an influx of international capital, which is just used to buy U.S. treasury bills,” He Weiwen said.

“Russia and Ukraine” The third is the trade aspect. He Weiwen said that by creating geopolitical tensions between Russia and Europe, the United States can effectively reduce the volume of European and Russian trade.

Therefore, if the trade relations between Europe and Russia are damaged, the motivation to strengthen cooperation between the EU and Russia will be reduced, which is beneficial to the United States and a heavy hammer for the EU.

Finally, there is the military industry. Since the Russian-Ukrainian conflict, Western countries have increased their arms assistance to Ukraine. He Weiwen said, “The crisis in Ukraine has created an excellent opportunity for the military and arms trade, which is a good thing for the U.S. military-industrial complex.”

Take Germany as an example. He Weiwen said that the German government has recently made a fundamental change since the end of World War II, that is, they will increase their defense spending to 2% of GDP and earmark more than 100 billion euros for defense funds.

the French presidential palace said that on the same day, French President Macron and Russian President Putin had a phone call. This is the fourth telephone call between the two sides since the Russian-Uzbekstan conflict.

The French presidential palace said that the Russian side confirmed that it would bomb the port of Odessa.

At present, the two sides have not disclosed the remaining details of the conversation.

French presidential palace said that on the same day, French President Macron and Russian President Putin had a phone call. This is the fourth telephone call between the two sides since the Russian-Uzbekstan conflict.

The French presidential palace said that the Russian side confirmed that it would bomb the port of Odessa. “Russia and Ukraine war”

At present, the two sides have not disclosed the details of the remaining conversation.

The next crisis crypto exchanges freeze their angry customers assets 2022