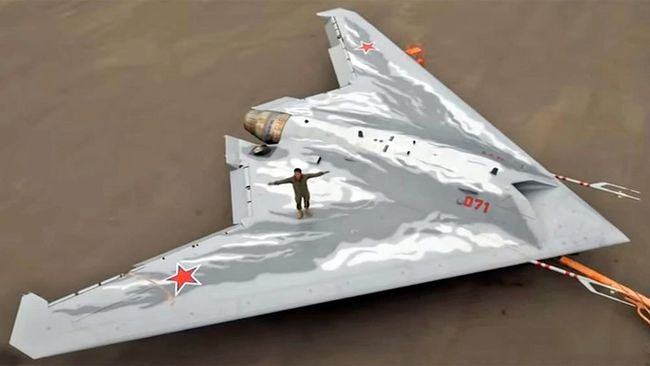 Russian Sukhoi S-70 “Hunter” drone will have better stealth capabilities. The program broadcast by Red Star TV confirmed the rumor that the plane would get an invisible engine nozzle.

The future S-70 hunter will use rectangular instead of the common circular engine nozzle. So far, only the fifth-generation American fighter F-22 Raptor in the world has used this nozzle.

Sergei Kuzmin, deputy chief designer of the Engine Test and Design Bureau of Ufa Engine Manufacturing and Production Consortium (affiliated to the Russian United Engine Company), said that the S-70 new engine nozzle helps to emit heat from the tail jet more effectively, making it more difficult for aircraft to be hit by missiles equipped with thermal tracking and infrared guides.

Kuzmin told Red Star TV: “We can effectively emit (heat) from the tail jet, and most importantly, we use low-temperature parts to block the high-temperature parts inside the nozzle by design means. The missile will not be able to see the hot engine blades.

The Hunter drone is one of the patented equipment of the Russian Air Force. It adopts a triangular wing shape layout, which is very similar to the X-47B of the United States.

It made its first low-key debut in 2019. At that time, the “spionage photos” of the plane parked in the test airport were posted on the Internet at that time.

The Russian Ministry of Defense and military industrial enterprises have been keeping a secret of the development of the aircraft, but the military has released videos of the S-70 flying at the same time as the fifth-generation fighter Su-57.

These videos have aroused heated discussion, but it is not clear whether the drone will fly autonomously or need to be operated by Su-57 pilots or ground control station personnel. Red Star TV has solved the mystery: the program shows the “secret flight control center” developed by Kelangstad.

The device was unveiled at the “Army-2021” Military Technology Forum (and Defense Exhibition). Nicola Dolrenkov, the company’s chief designer, explained and demonstrated the control of the Hunter drone.

Kelangstad is a very interesting enterprise. Although this is a private company, it is extremely important to the country. The company produces multiple series of drones, whose products can perform a variety of unique tasks such as situational monitoring and exerting physical influence on the situation.

The Russian Ministry of Defense has signed a contract to purchase the attack Orion long-term drone produced by the company. High-precision missiles and bombs matched with Orion caused a sensation at the “Army-2021” forum.

Orion is the first medium-altitude long-term drone developed by Russia. It can perform aerial reconnaissance, patrol, determination of ground and water surface target coordinates and terrain measurement photography missions. Now, it has added a new attack function. Given its continuous flight time for several days, this is a very dangerous weapon.

But Hunter is completely different from Orion. If Orion is more like a classic power glider, the S-70 is a new generation of drones. It has a wingspan of 19 meters and a take-off weight of 25 tons. It adopts stealth technology and is not easy to be found by radar.

S-70 Hunters can carry high-precision missiles and bombs with a total weight of no more than 3 tons inside the fuselage and fly these munitions to 5000 kilometers away. Compact engine nozzles and fuselage composite materials make it difficult for this drone to be found by rivals in flight.

Russia develops new missiles for the Soviet 57, but the range is still less than PL15.

Russian Air Force was equipped to watch the first mass-produced Su-57 fifth-generation fighter jet in December 2020. It is expected that 76 Su-57 will join the Russian army by 2027.

Although the Su-57 is considered a fifth-generation fighter, its body has been used to test an increasing number of sixth-generation technologies, including hypersonic missiles, advanced artificial intelligence systems, drones and loyal wingmen.

The Su-57 will also be equipped with a new Saturn 30 engine from 2022, which will greatly improve the flight performance and endurance of the aircraft.

Gas lobby : The activist collective »weiterSo!« has launched a whistleblowing appeal to employees of federal…
News