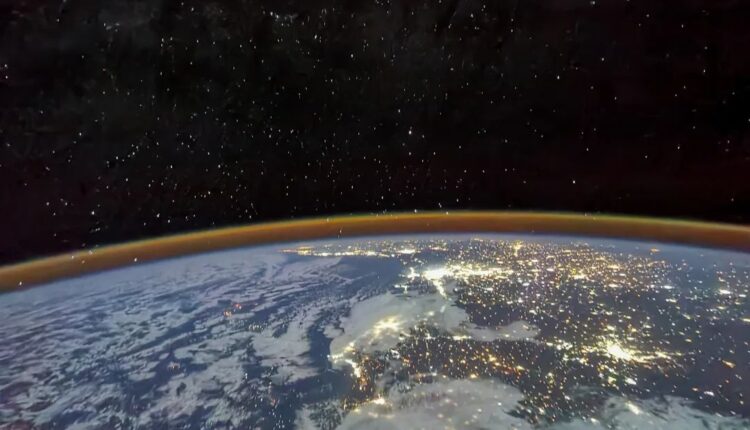 Shenzhou 12, July 21, 2021, in the Gulf of Guinea, the southwest monsoon mixed with humid water vapor did not stop its rush to the North African continent. After doing interval exercises for bike sprints, muscle dimensions, EMS maintenance, neuromuscular training, etc., astronaut Tang Hongbo returned to his bedroom and took this photo.

July 30, 2021, astronaut Tang Hongbo photographed the grand scene of tens of thousands of lights on the North African continent. The stars in the universe and the lights on earth reflected each other, playing a harmonious life movement together.

August 8, 2021, at 6:32 a.m. Beijing time, the core module assembly crossed the Ethiopian plateau. Under the dotted night sky, the atmosphere of the sun-spotted atmosphere gently embraced the beautiful blue planet. The outline of the Somali Peninsula in the distance pointed in the direction of the sun.

August 13, 2021, the weather in the Indian Ocean was still changeable. After completing the cabin robot arm control training, Tang Hongbo and his two calf dolls waited for the beautiful river and mountains of the motherland in front of him.

August 18, 2021, astronaut Tang Hongbo’s small bedroom in the core module assembly was warm and comfortable. The warm sleeping bag and the vent beside the pillow ensured that the astronauts could have a comfortable sleeping environment. Whenever he saw a picture of the children on the bulkhead, would Tang Hongbo go more to his home when passing through the motherland. Leave some eyes?

August 24, 2021, when the core module assembly crossed Beijing, Yu Haisheng took this night scene of Beijing. The “star” of the golden light on the right side of the photo is Beijing Daxing International Airport. (Shenzhou 12)

August 24, 2021, over the Pacific Ocean, the solar windsurf of the core module assembly is like a pointer leading China’s spaceflight to the vast universe, pointing to a farther and brighter future.