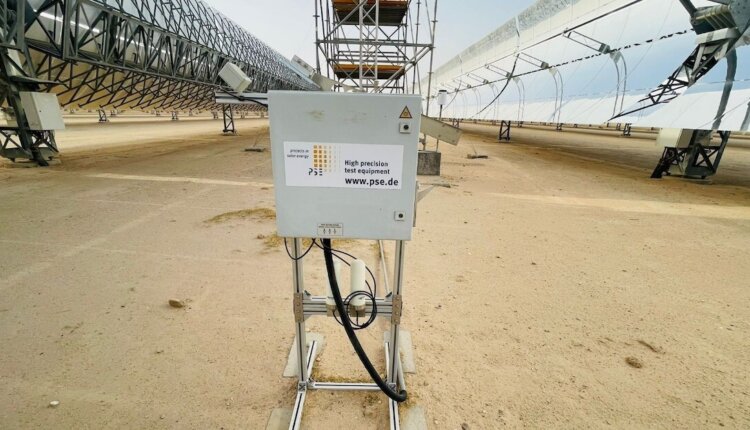 An important factor is cleaning the mirrors and receivers. In the desert regions typical for solar thermal power plants, pollution from dust and sand can noticeably reduce the yield. At the same time, water is a scarce resource.

These factors are so important that they already play a role in the choice of location. “In the case of concentrating power plant systems, pollution is a particular challenge, since the scattering of the solar radiation on the dust particles leads to high yield losses,” says. Gregor Bern, Group Leader Concentrating Collectors and Optics at Fraunhofer ISE.

In operation, it is important to clean the power plants as sparingly and specifically as possible. To find out when this is due, there is now a fully automatic solution with the Avus measuring device. It was developed jointly by the Fraunhofer Institute for Solar Energy Systems ISE, PSE Instruments GmbH, TSK Flagsol Engineering GmbH and Dornier Suntrace GmbH in the “AVUSpro” project.

The four partners have already tested the measuring device in a parabolic trough power plant in Kuwait. According to Bern from Fraunhofer ISE, it is the only one in the world that is able to determine the degree of pollution practically every day during power plant operation – completely autonomously. According to the Fraunhofer ISE press release, cleaning techniques and cycles could be optimized in this way.

To do this, the measuring device uses its own small mirror, which is aligned parallel to the power plant mirrors. So, like them, it gets dirty over time. Once an hour, a swivel arm guides the small mirror to a measuring device developed by Fraunhofer ISE, which determines the degree of reflection. There is another mirror in the device that is protected from dirt and thus serves as a reference.

The overall system with mechanics and a data logger was developed by PSE. “The aim was to create a completely autonomous measuring system with an online connection for data transmission, since solar thermal systems are often installed in remote regions and over large areas,” says. Jan Steinmetz, Head of Department Test Equipment at PSE.

Since November 2021, three prototypes of the device have been undergoing practical tests at the Shagaya parabolic trough power plant of the Kuwait Institute for Scientific Research (KISR) in western Kuwait. The devices are installed at various locations within the 250 ha facility with a nominal output of 50 MW. They should also record local deviations in pollution rates.

The weather service provider Dornier Suntrace is responsible for setting up and maintaining the stations. It creates monthly reports from the automatically evaluated pollution and weather data. “The level of contamination in the system can be read very precisely from the data collected,” says Raul Granados from Dornier Suntrace. Pollution is strongly correlated with sandstorms and rain.

TSK Flagsol is involved in the research project as the operator on behalf of the Solar thermal power plants owner KISR. According to the first results, cleaning costs can be reduced by up to 25 percent and water consumption by up to 19 percent with the pollution costs.

The partners now want to test the new measuring instrument over a longer period of time. The research team also wants to carry out a similar test in a power plant with solar tower technology. In addition, the researchers want to compare the automatically recorded data with a manual pollution measurement, at least as an example.

The team also wants to take a closer look at the distribution of the contamination within the plant. In the long term, the commercialization of the measuring device for the international solar market is planned – both for solar thermal power plants and for photovoltaics.

Solar thermal power plants were considered a cheap option for generating solar power on a large scale in sunny regions. Then the photovoltaic industry managed to massively reduce its costs and undercut Concentrating Solar Power (CSP).

However, since CSP power plants can store energy comparatively easily in the form of heat, they are still not obsolete today. New CSP power plants are being planned again in Spain. They already supply two percent of the electricity there at night.

Night trains: This is how useful train could outperform cars and planes