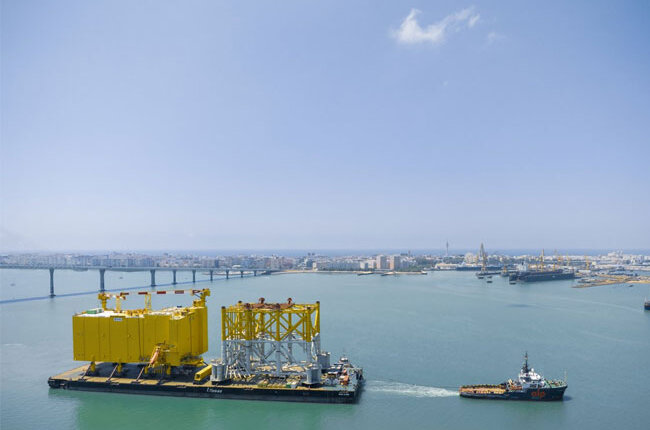 After only three years of construction, the offshore converter station is on its way towards the North Sea. Offshore platform DolWin kappa is part of the DolWin6 grid connection system, which is scheduled to go into operation in 2023.

In purely mathematical terms, the 900 MW connection will supply more than a million households with green wind power from the German North Sea.

With the DolWin6 direct current connection, TenneT will bring even more green wind power safely to shore from the German North Sea in the future.

On the way there, Europe’s leading offshore transmission system operator has now taken the next important milestone: the shipment (sail-out) of the 900 MW offshore platform DolWin kappa took place on August 5th, 2022 from the Dragados Offshore shipyard in Cádiz, Spain .

After only three years of construction, the platform is now on board the transport barge Iron Lady and is en route to the port of Rotterdam, the Netherlands. There it is reloaded onto the world’s largest working ship, the Pioneering Spirit, and then shipped to the installation site. The grid connection system is scheduled to go into operation in 2023 and supply renewable energy for over a million households.

“TenneT takes its job seriously and is expanding the grid progress in the North Sea step by step. With the successful sail-out of the DolWin kappa offshore platform, we have taken the next important step. DolWin6 is already the 13th offshore grid connection in our German portfolio and will further strengthen the urgently needed European energy independence from 2023,” said TenneT’s COO Tim Meyerjürgens on the occasion of the exit of the platform.

“We also have our partners to thank for the fact that we reached this milestone on time: My colleagues, working very closely with our contractors Siemens Energy and Dragados Offshore, only needed three years to build the platform, despite the enormously challenging pandemic. An outstanding performance and evidence of strong, reliable partners,” Meyerjürgens continued.

The platform consists of a founding structure (jacket) and a Superstructure (Topside). Combined, both have a total height of about 82 meters, so the platform will protrude about 53 meters above the water surface of the North Sea.

There is also a bridge that will connect DolWin kappa to DolWin beta (grid connection system DolWin2), which was put into operation in 2016, in order to efficiently use the existing infrastructure of the mother platform. In addition, the size of DolWin kappa has been significantly reduced thanks to an overall optimized design of the platform.

“The well thought-out construction of the offshore platform saves important resources and at the same time reduces environmental impact to a minimum. This makes it clear: when planning and implementing our grid connections, protecting the environment and nature is the top priority,” said Tim Meyerjürgens.

Arriving in Rotterdam, the platform is loaded onto the world’s largest workboat. The Pioneering Spirit is 382 meters long and will bring all platform components (jacket, topside, pilings and bridge) to their final destination in the German North Sea.

The DolWin kappa is then installed there directly from the workboat. After successful commissioning in 2023, the three-phase current generated by wind farms at sea will be converted into direct current on the platform and transported to Hilgenriedersiel on the mainland with a 45-kilometer long sea cable.

From the landing point in Hilgenriedersiel, the electricity is transmitted to Emden via an underground cable that is also around 45 kilometers long. Here TenneT built the onshore converter station Emden/Ost as well as the substation to convert the direct current back into three-phase current and to feed it into the high-voltage grid at the correct voltage level.

Data and facts about DolWin6