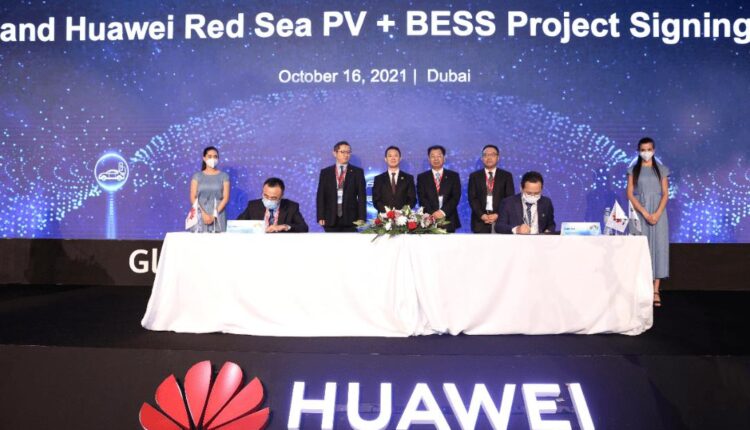 Huawei officially announced that it has successfully signed the world largest energy storage project so far, the Saudi Red Sea New City Energy Storage Project, with a scale of 1,300MWh.

For Huawei, winning the world largest energy storage project means that the continued layout of the energy storage track has finally achieved a substantial breakthrough.

Huawei stated that the Red Sea New City energy storage project is a key project included in Saudi Arabia “Vision 2030” plan. The developer is ACWA Power and the EPC contractor is Shandong Power Construction No. 3 Company.

According to Tianyan Check data, Huawei Digital Energy Technology Co., Ltd. was established on June 7, 2021. The legal representative is Hu Houkun with a registered capital of RMB 3 billion. The company is wholly-owned by Huawei Technologies Co., Ltd.

In traditional energy storage solutions for large-scale ground power stations, the difference in battery modules will lead to mismatches, resulting in battery capacity decline, rapid attenuation, difficulty in operation and maintenance, and high risks. Huawei uses the controllability of power electronic products to solve lithium The inconsistency of the battery has reduced the levelized cost of the energy storage system by 20%.

In the past two years, although Huawei’s mobile phone and 5G business have been chased down, Huawei is still increasing R&D investment against the trend, striving to expand new businesses, and looking for new growth points. The new energy track is one of the strategic offensive directions. First, it has continuously entered the subdivisions of new energy vehicles , photovoltaics and energy storage.

The market expects that this order from Huawei may once again ignite the A-share energy storage track. In fact, the disk on October 18 showed that the new energy track was once again targeted by funds. The leading Ningde era rose sharply yesterday, and the total market value climbed to 1,385.8 billion yuan.

According to CNESA statistics, among China new electrochemical energy storage projects put into operation in 2020, CATL ranks first in terms of installed capacity.

According to data, as of now, the number of A-share stocks involved in the concept of energy storage has reached 150, with a total market value of 5.97 trillion yuan. Among them, Narada Power, Ganfeng Battery, BYD, and Guoxuan Hi-Tech are all ranked in the scale. Top ten. In addition, photovoltaic leaders such as Longji and JA Solar have also begun to deploy energy storage.

According to incomplete statistics, in the first half of 2021, the scale of new domestic new energy storage installed capacity exceeded 10GW, a year-on-year increase of over 600%. And the number of projects with larger installed capacity reached 34, 8.5 times that of last year, covering 12 provinces across the country.

Among them, pumped storage is the earliest and largest energy storage technology. As of 2019, the installed capacity of pumped storage accounts for as high as 93.4%. However, the limitations of pumped storage are very obvious. It needs to be built in areas with abundant water resources and large gaps. After years of development, pumped storage has limited future growth space and cannot meet the needs of the carbon-neutral era.

In this situation, electrochemical energy storage is receiving attention. Because of its flexible installation, short construction period, and wider application range, it has become the most promising energy storage technology. The global installed capacity has increased from 1 in 2017. 7% has risen to 7.4% in 2020, and there is still huge room for growth in the future.

Another key factor in the rise of lithium battery energy storage is the rapid decline in costs. According to BloombergNEF, from 2010 to 2020, the average price of global lithium-ion battery packs has dropped from US$1,100/kWh to US$137/kWh, a decrease of 89%. In the past ten years, the entire energy storage from the perspective of equipment, The cost of energy storage systems has dropped by 75%.

In addition, a trillion-level track is inseparable from the dividends of the times. The dividend of the era of the energy storage industry is naturally “carbon neutral.” On September 22, 2020, China officially announced to the world that it will strive to achieve the peak of carbon emissions by 2030 and achieve carbon neutrality by 2060.

Since then, China’s energy storage industry has ushered in a bright moment. As we all know, the main way to achieve the ultimate goal of carbon neutrality is to develop renewable energy sources such as photovoltaics and wind power to replace fossil energy. Photovoltaic and wind power are typical intermittent energy sources and must rely on energy storage. When photovoltaic and wind energy are sufficient, electrical energy is stored and the stored electricity is released when needed.

Subsequently, the energy storage industry ushered in a series of policy dividends.

The “Energy Storage Opinion Draft” clarifies the development goals of energy storage. By 2025, the transformation of new energy storage from the initial stage of commercialization to large-scale development will be realized. The market environment and business model are basically mature, and the installed capacity will reach more than 30GW.

According to estimates, by 2030 In most areas of China, the combination of optical storage and storage can achieve parity, and the energy storage market space can reach more than 1.2 trillion yuan.

In addition, since October, policies have been introduced in many places to improve the peak-to-valley time-of-use tariff mechanism, and China power market reform will continue in the future. Institutional sources pointed out that the peak-to-valley spread arbitrage is the most extensive and most important business model of the energy storage industry.

To further increase the peak electricity price will undoubtedly play a vital role in the development of the energy storage industry.

When will global covid end ? rules and Warning 2022