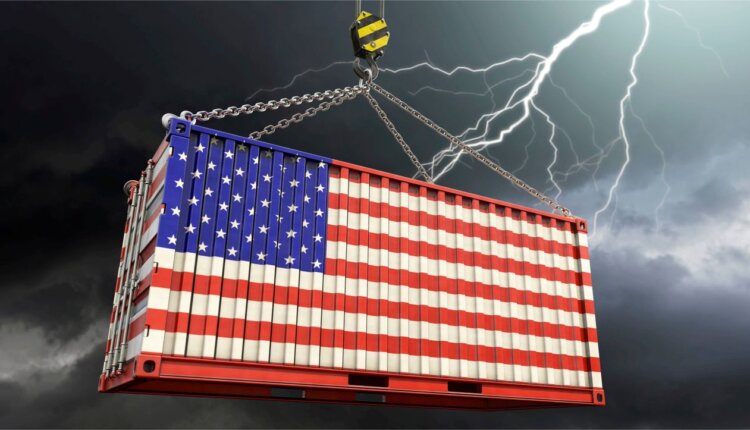 Recession or not? On Tuesday the International Monetary Fund (IMF) lowered its forecasts for US and global economic growth for the current year and the coming year.

Two days later it’s official: the US economy has contracted for the second quarter in a row.

Wall Street is reacting very calmly. Recession and nobody wants to admit it?

The fear of a recession is justified: inflation is depressing the purchasing power of US consumers, who are so important for the US economy. Their expenditure accounts for about two-thirds of total economic output. Rising interest rates increase borrowing costs and depress companies’ propensity to invest. The first companies are already cutting jobs and job cuts will eventually mean less consumption.

Nevertheless, there are doubts that the USA have fallen into a possibly self-reinforcing economic downturn.

The world’s largest economy has experienced eight recessions in the past 50 years, but not all are of the same severity and duration. The US economy needed significantly more time to recover from the recession in 2008 as a result of a financial and banking crisis with up to 10 percent unemployment. It was only eight years later that unemployment fell well below the 5 percent mark.

There is no exact definition of recession in the USA

The fact is, there is no precise, unambiguous definition of recession in the US. That is why central bankers, economic optimists and pessimists are currently struggling for interpretative sovereignty: in the USA, the task of identifying and determining recessions is the responsibility of a little-known committee of the National Bureau of Economic Research (NBER).

According to the NBER, a recession “is a significant decline in economic activity that spreads across the economy and lasts more than a few months” , writes the academic institution on its website.

But that definition is considered fuzzy, with the NBER calling the 2020 downturn at the start of the Covid-19 pandemic a recession, even though it only lasted a few months. The problem: The small and elite committee of eight well-known economists from various US universities in the USA only sets the actual date of a recession months or possibly even years later – “like a coroner who carries out an autopsy” judges that “Wall Street Journal” .

The experts therefore do not make real-time assessments, but use data to analyze retrospectively when expansions and recessions begin and end. Anyone expecting a quick, official vote will be disappointed.

Committee considers around a dozen criteria

The NBER committee uses a dozen criteria to determine whether the US economy is in recession. Gross domestic product (GDP) is just one of them.

The level of employment, which is currently still bursting with energy, household income, consumer spending and industrial production include the experts in their analysis. There is no dominant criterion, assures Bob Hall, an economist at Stanford University, to the “Wall Street Journal”.

When is the recession?

“If the committee recognizes them,” says Hall. In other words, the economists don’t let themselves be pushed, carefully examine all available data and then cast their vote. In any case, two consecutive quarters of falling economic output are not a recession.

“That’s nowhere near the philosophy that the panel uses in identifying,” Hall says of the often-cited rule of thumb. “This one really doesn’t make sense.”

Against this background, the NBER will now not take part in “speculations” as to whether the USA has slipped into a recession or not. “We don’t participate in hypotheses about things that haven’t happened yet.”

The US Federal Reserve, which continues to try to curb inflation expectations with hefty interest rate hikes and is accepting a downturn in the economy, tends to follow the NBER’s view.

“I don’t think the US is in a recession right now,” said Fed Chair Jerome Powell Explained in the middle of this week. At the same time, he emphasized that somewhat slower growth is needed to combat high inflation.

US Secretary of the Treasury Janet Yellen (75) sees no recession despite the economic downturn in the USA “You’re not seeing a significant increase in corporate bankruptcies, the typical types of emergencies that we associate with the word recession,” Yellen said Thursday.

The labor market remains exceptionally strong – not what has been seen in past episodes classified as recessions.

The slowdown in economic growth was to be expected given how quickly the economy grew as it recovered from the pandemic and job losses, Yellen said.

While Yellen avoided saying directly that the US economy is not in recession, she made it clear that current developments do not correspond to her understanding of an economic downturn.

“Most economists and most Americans have a similar definition of recession,” she said. These included significant job losses, mass layoffs and the closure of private sector companies. All of this is currently not happening in the USA.

In the USA, the “National Bureau of Economic Research” decides on the state of the economy. In addition to GDP growth, economists also take a range of other data into account when deciding whether the US economy is in recession. Economists define a recession as “a significant decline in economic activity that spreads across the economy and lasts more than a few months”.

After the rapid increase in interest rates, experts see a breathing space for builders and real estate buyers. Even before the European Central Bank’s key interest rate hike, the costs for mortgage lending with terms of ten years had fallen noticeably, observed the Munich-based credit broker Interhyp. Most recently they were at around three percent after a good 3.4 percent at the top.

“At the moment the trend is falling,” said Max Herbst, founder of FMH Finanzberatung. There is a short-term dip, the uptrend is broken. Most recently, Herbst thought four percent was possible after the summer break.

After building interest rates have more than tripled from 0.8 percent to over three percent since January, Interhyp now expects less momentum.

“The banks have already largely factored in expectations of the planned interest rate hikes and concerns about the economy are becoming increasingly important,” explains Mirjam Mohr, board member responsible for private customer business at Interhyp.

That slows down the rise in interest rates. The signs are now set for a tighter monetary policy. Interhyp expects a moderate increase in construction interest rates to 3.5 to four percent for ten-year loans by the end of the year.

Ditmar Rompf, CEO of the construction financier Hüttig & Rompf, is more optimistic. Much of the interest rate hikes announced by the ECB have already been anticipated in the building interest rates. He also thinks three percent interest is realistic at the end of the year.

The reason for the rise in construction interest rates since the beginning of the year was the high level of inflation, which is putting central banks under pressure to raise interest rates.

The ECB has also announced further rate hikes. In anticipation of a tighter monetary policy, the yields on ten-year government bonds, which are used as a basis for construction interest, shot up. Recently, however, yields have fallen sharply.

The rise in interest rates since January means immense burdens for borrowers. The comparison portal Check24 recently calculated that construction financing of more than 400,000 euros at an effective interest rate of three percent results in almost 79,000 euros in additional costs over ten years.