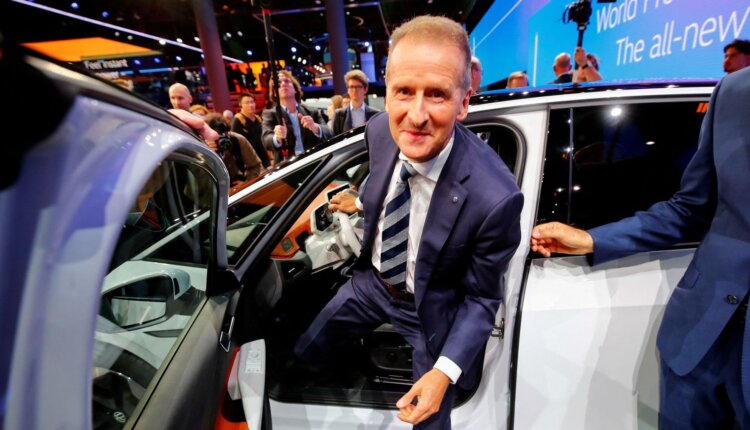 Herbert Diess resigns as CEO of the Volkswagen Group. The company surprisingly announced on Friday evening that the 63-year-old had agreed with the supervisory board to leave on September 1st.

Successor is to be Porsche boss Oliver Blume VW to The papers lose 2.6 percent in Frankfurt late trading after closing at 134.32 euros .

Blume is to continue his position at Porsche. There he is working on an IPO for the VW subsidiary in the fall. Blume has long been considered a possible successor to Diess. His name had been mentioned several times behind the scenes when a conflict between the VW boss and the powerful works council over possible new austerity programs escalated last year.

Even before that, there had been violent differences of opinion with parts of the supervisory board about the further strategy and about a possible drastic job cut at Europe’s largest car manufacturer.

Supervisory Board Chairman Hans Dieter Pötsch thanked Diess. He said “both during his time as CEO of the brand Volkswagen as well as the group significantly advanced the transformation of the company”. Diess pushed the conversion of VW in e-mobility significantly forward.

However, there have recently been a number of problems, especially with the sluggish and even more expensive development of our own software and IT systems.,At the same meeting, it was decided that Chief Financial Officer Arno Antlitz will support Blume in the future in the role of Chief Operating Officer (COO) to fight a software problem.

The delays in the development of the Cariad software unit could be decisive for the success of the e-car strategy at Volkswagen.

Car expert Ferdinand Dudenhöffer says: “You can assume that the new VW CEO Blume will implement a realignment of the software and thus also of Cariad.” How Volkswagen is positioning itself for the future will have to be determined in the coming months show.

Herbert Diess resigns from his position as Volkswagen boss. This message is only surprising at first glance, because the conflict at the Wolfsburg car company has been smoldering for a long time. A mediation committee of the supervisory board even met last year. According to the company, the separation was “amicable”.

Even if it’s true, in view of the many problems, it degenerates into a cliché. ‘The heart of the German automotive industry beats leisurely, every change provides a pulse – and Diess set out for nothing less than an endurance run for change. Was he ultimately just too fast.

Wolfsburg? After all, he had set out to develop the venerable VW brand away from the diesel scandal and towards a green thought leadership role.,A much-needed change, but with his management style This alienated key supporters. Especially among the workforce, his provocative demeanor repeatedly caused irritation, sometimes fear, and ultimately rejection.

An affront at a company to which employees often remain loyal for generations. ,Diess emulated US pioneers such as Tesla boss Elon Musk. He publicly praised his company several times (which also caused confusion) and posted selfies together.

His proposal to give Volkswagen a fantasy name – similar to the Stellantis group (Fiat, Opel, Peugeot, Citroën) – was met with incomprehension. In the end, even Lower Saxony’s Prime Minister Stephan Weil intervened.

Diess also distracted himself from his ambitious goals for the restructuring of the group, offered too much scope for attack with trifles.,And now? In short: VW is stepping on the brakes.

Because with Oliver Blume as his successor, the group is making a safe choice. With all the trouble in recent years, the discussion about a possible Diess successor was not missing. One name that came up frequently was that of Blume.

The previous Porsche boss has been with the VW Group since 2009 and has headed the subsidiary since 2013. So far he has been significantly less present than Diess. In interviews he talks about team spirit and the possibilities of hybrid drives.

He’s not against change, but unlike Diess, he’s not the driving force behind it either. ‘But even if he wanted to: simply picking up where Diess left off won’t be possible. On the one hand, the works council and supervisory board need to be addressed in a much more focused way. After all, it doesn’t work without them – Diess also had to learn that.

Then there is a software problem to be solved: there are significant delays in the “Cariad” group unit – a Diess project. That could be decisive for the success of the e-car strategy at Volkswagen. And then there is Blume’s own project with the planned IPO of Porsche in the fall.

The decision for Blume can ensure calm in Wolfsburg. One can only hope that this calm does not become too comfortable and prevents the urgently needed changes in the industry.