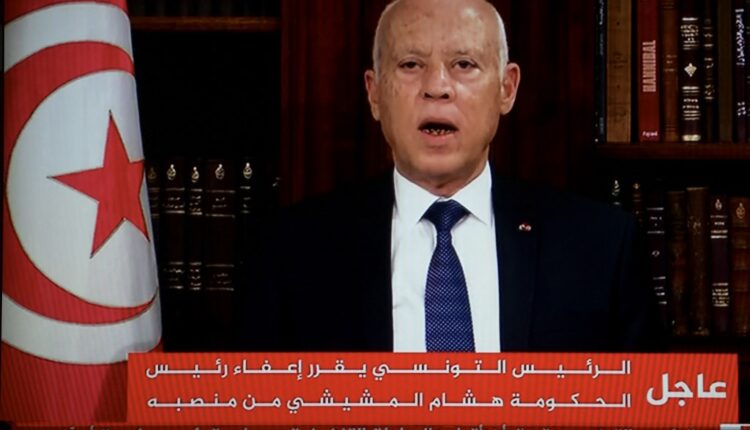 On July 25, Tunisian President Said announced that he would take over the executive power of the government, suspend parliamentary activities, and dismiss Prime Minister. The next day, it was announced that the two important ministers would be dismissed and the Speaker and others who tried to “break into the palace” into the parliament to protest were turned away, making the situation in the country more unpredictable.

After the reform in 2011, the Republic of Tunisia is a parliamentary country. The Prime Minister and cabinet members are elected members of the largest parliamentary parties/party coalition. The Cabinet has executive power and is accountable to Parliament. However, unlike Germany, India, Singapore and other “pure parliamentary countries”, although the President of Tunisia is detached, he is not a pure “virtual monarch”, but has a certain influence in political life by mastering the command of the army.

On the evening of July 25, President Said urgently met with the heads of the army and security agencies supporting his side, and then announced that he would take over the executive power of the cabinet “in accordance with Article 80 of the Constitution” until the appointment of a new Prime Minister and suspended parliamentary activities. Later, he declared the “suspension period” for 90 days.

On July 26, the President announced the dismissal of the Secretary of Defense and the Minister of Justice. This move angered Ganushi, the Speaker of Parliament, the number one figure of the Tunisian Baath Movement Party. He immediately led a group of supporters to the parliament to “break into the palace”, but was stopped by the ready security personnel. Ganushi and others shouted “We are defending the Basic Law, and you have no right to stop it” and forced the invasion, while the security personnel responded that “We are defending the country” and blocked the “trespassers”.

The Ba’ath Movement Party and several other parties in the ruling coalition immediately set up great momentum on the Internet, streets, at home and abroad, accusing the president of launching a “self-coup” to overthrow Tunisia’s “legitimate democratic order”, while the pro-president side held celebration rallies throughout the country, with participants cheering and singing the Tunisian national anthem. .

There must be a cause for something strange.

Tunisia is located on the southern coast of the Mediterranean Sea and the northern part of the African continent. The country has a long history. The capital of Carthage, which has competed with Rome for many times, is in today’s Tunisia. Since then, it has been ruled by Rome, the Arab Empire, the Ottoman Turks, France and other countries. The demographic structure has also undergone fundamental changes, becoming a North African Arab country. In 1956, Tunisia obtained internal autonomy, and officially completed its independence the following year. It was one of the first countries on the African continent to gain independence after World War II.

For more than half a century after independence, Tunisia, despite its political undemocratic economy and society, has been relatively stable. It has not been as volatile and coups as the vast majority of African countries of its time. Burjiba and Ben Ali have served as Tunisian presidents for 30 years and nearly 24 years, respectively.

In 2010, the “Arab Spring” broke out in the Arab world in the Middle East. This movement expanded and evolved into a trigger for “power grabbing”. It was the “hawker incident” in Tunisia, which led to the outbreak of the so-called “Jasmine Revolution” and forced Ben Ali into exile in January 2011.

After Ben Ali went into exile, various Islamic radical organizations that had been expelled from abroad returned home and won a parliamentary majority after the 2011 legislative elections. However, their efforts to promote the Islamic radical organization “Rule Law” were strongly resisted by society and had to be restrained. Since then, Tunisia has entered a relative Period of balance.

However, voters, the public and secular parties began to be increasingly dissatisfied with the long-term ruling of Islamic radical organizations such as the Baath Movement Party, but were unable to lead Tunisia out of the economic and employment difficulties, which was also the root cause of the “Jasmine Revolution” that year.

Since the beginning of the year, President Said has tried to limit the power of the cabinet and the Prime Minister, and has been in constant contact with the Cabinet, the Baath Movement Party and other Islamic militant organizations, and the political situation and society have been in turmoil from time to time.

Two changes that happened during this period—the government’s weak prevention and control of the coronavirus epidemic and the “dictation” of “foreign aid” Turkey and Qatar — have exacerbated the plight of the Cabinet and Islamic militant groups.

It is against this delicate background that President Said dares to take a sudden attack and hit him, and the strange phenomenon of cabinet and parliament indignation, but many people “be happy”.

During the “48 Hours of Turbulence”, the president closed several Turkish and Qatari institutions in Tunisia at the same time, such as the famous Al Jazeera office in Tunisia, apparently with the intention of cutting off “foreign aid” from the cabinet and Islamic militant organizations.

Turkey and Qatar unexpectedly condemned the “coup” and expressed support for the Prime Minister and the Baath Movement Party. But as mentioned earlier, part of the resentment of the Tunisian public is aimed at them, and this support can be said to be unhelpful.

At the beginning, the United States, France and other countries that promoted the “Arab Spring” were in an awkward situation when they seized power everywhere in the Arab world: “Arab Spring” led to the rise of Islamic radical organizations and extreme terrorist forces in the Arab world and turned back at Europe and the United States. Although Tunisia, which took the lead in “seizing power”, was relatively “successful”, it was unconsciously Become the largest exporter of violent terrorists from foreign Islamic militant organizations in the Middle East.

If you support the Prime Minister and the Speaker and encourage the Islamist radical factions to “fight”, or you may repeat the mistakes and take their own troubles. However, supporting the president’s “self-coup” is tantamount to self-denial of the “one person, one vote” he advocates. Because of this, they mainly said some ambiguous “sap soup words” and did not make a big move for the time being.

Tunisia’s secular parties are delicate, criticizing the president for being “unconstitutional” on the one hand, and the cabinet and the Baath Movement Party of “general responsibility for Tunisia’s social and political crisis”. Obviously, they are “small curses and help” to the president, hoping that this change is in their own favor.

There are still many variables in the future. The key factors are the 90-day “commutation period” and the way the new cabinet and the new prime minister are produced. If the president agrees to hold a new parliamentary election and hand over the power of forming a cabinet and administration to the new ruling coalition after the election, the American and French countries that did not want to be deeply involved will have the excuse of “non-interference”, and domestic secular political parties will firmly sided with the president because of their real profits.

But there is also a great risk in doing so – Islamic radical organizations still have a deep social foundation in Tunisian society, especially in rural areas, and are more closely organized and mobilized than secular political parties. In case of a ruling coalition is formed again, it will make the president’s risky efforts be abandoned and dilemmad.

The future of natural gas development is expect demand recovery and energy transformation.