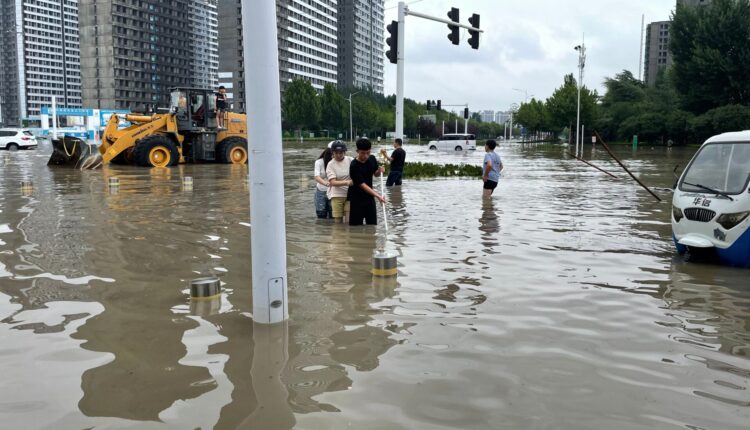 Zhengzhou : Water Conservancy Department of Henan Province released a message that the rainfall in Henan “has been “once in more than 5,000 years”. Is the huge rainstorm that hit Zhengzhou, Henan Province the problem of urban drainage or the powerlessness before the natural disaster?

The main urban area of Zhengzhou City, Henan Province, hit by heavy rain, The precipitation is equivalent to pouring into 107 in an hour? Expert: This metaphor is unscientific.

According to the official Weibo of “Zhengzhou Meteorology”, the Zhengzhou Meteorological Bureau has sorted out and counted the data of the extremely heavy rainstorm: from 2 00 on the 17th to 2 00 on the 20th, the rainfall in the course of these three days reached 617.1mm. Among them, hourly precipitation and single-day precipitation have broken through the 60-year history since the construction of Zhengzhou Station in 1951. The average annual rainfall in Zhengzhou is 640.8mm, which is equivalent to the total rainfall in the previous year. At 1:00 on July 21, Henan Flood Control and Drought Relief Headquarters upgraded the flood control emergency response level from level II to level I.

In response to this statement, the Health Times interviewed a number of meteorologists, who said, “There is no such calculation in meteorology, and the statement is not rigorous and has no scientific basis.”

A researcher of the China Meteorological Administration told the reporter of Health Times that the heavy rainfall in Zhengzhou is indeed rare, but the result of multiplying the peak rainfall measured by a station over a certain period of time with the area of Zhengzhou is not a professional calculation method in the meteorology community.

“In practice, precipitation will be affected by many factors. It is unscientific and unrigorous to calculate the peak measured by a certain period of time as representative data.” The above researchers said.

“Water will accumulate in the rain”, Zhengzhou is building a “sponge city”

“It’s not new that the rains in Zhengzhou.” Ms. Liu, who lives in Jinshui District, Zhengzhou City, Henan Province, told the reporter of the Health Times that since she settled in Zhengzhou 10 years ago, there will be water accumulation and traffic jams in Zhengzhou city once the rainy season. It is not the first time that Zhengzhou city has been flooded into an ‘ocean’, especially in the tunnels of the city. Serious water will occur during the rainy season, but this extremely heavy rain and inland waterlogging is the most serious one.

“The worst hit this time is in the city center. At that time, I felt that the sky had leaked a big hole, leaning down like water, and it rained until it was dark.

In order to solve the problem of urban waterlogging, Zhengzhou City announced that it would invest 53.4 billion yuan to build a “sponge city”. According to the official website of Zhengzhou Municipal Government, “Sponge City” refers to the urban development mode of urban development that effectively controls rainwater runoff and realizes natural accumulation, natural penetration and natural purification by strengthening urban planning and construction management, giving full play to the absorption, storage and slow release of rainwater by buildings, roads, green spaces, water systems and other ecosystems.

In January 2018, the Zhengzhou Urban and Rural Planning Bureau issued the Zhengzhou Sponge City Special Plan (2017-2030), which includes Zhengzhou’s main urban area, as well as four areas: Aviation City, Western New Town, Baisha Group and Jiulong Group, with a total planned area of 1945 square kilometers. The planning period is from 2017 to 2020 in the near future and from 2020 to 2030. The overall goal of the plan is to build Zhengzhou into a sponge with water absorption, water storage, water purification and water release functions, to improve the urban flood control, drainage and disaster reduction ability, improve the urban ecological environment, and alleviate the pressure on urban water resources.

According to the plan, Zhengzhou has been built for nearly five years since 2016. In May 2021, Zhengzhou Daily published “Zhengzhou: “Breathing” Sponge City, Release Comprehensive Ecological Benefits” mentioned that since the construction of the sponge city, Zhengzhou has eliminated a total of 125 flood-prone points, with a elimination rate of 77%.

However, in the face of this heavy rain, why does the “sponge city” look so weak? A teacher from the School of Geography and Science of Nanjing Normal University, who did not want to be named, said in an interview with the Health Times that the design of “sponge city” is generally through artificial wetlands, green vegetation, flower plates, tree pools, etc. Its design is mainly to solve the osmotic cycle of medium and light rain and a certain amount of surface water. The torrential rain in Zhengzhou exceeded the “sponge city”‘s tolerance for water treatment, making it play a limited role.

“In recent years, with the acceleration of urbanization, the land has been continuously developed, resulting in a decline in soil water culverting capacity and an increase in land hardening rate, increasing the risk of internal waterlogging.” The above-mentioned teacher said that in the face of extremely heavy rain, the relevant local departments should give early warning and form an effective emergency management plan. For example, inform citizens in advance to stay at home as much as possible, stop major public activities, do a good job in forced platoon equipment, rescue teams to arrive in advance

July 22 : Iran opens its first oil terminal in the Gulf of Oman. President of Iran: Mark the failure of U.S. sanctions