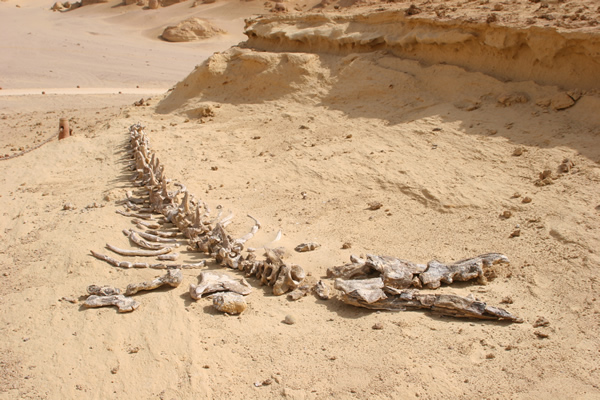 Through detailed analysis, this was confirmed as the earliest and most primitive old fossil of cetacean found in Africa.

This discovery is a major achievement in the field of paleontological research in Egypt and has attracted widespread attention.

Researchers named this primitive cetacean that can walk on land and swim in water as “Anubis original whale.” The species to which the fossil belongs is about 3 meters long and weighs about 600 kilograms.

It is amphibious and has strong jaw muscles that make it easier to bite prey. It was one of the most successful predators near the beach at that time. However, this species became extinct during evolution.

“Whale Valley” is an important discovery site of ancient cetacean fossils in Egypt. It is located in the depths of the desert about 170 kilometers southwest of the capital Cairo.

More than 40 million years ago, the place where “Valley of Whale” was located was a vast ocean.

In the long sea and land changes, paleontological fossils buried in the seabed gradually surfaced.

Forbes American Rich List released, Gates Fell Out Of The Top Two For The First Time In 30 Years