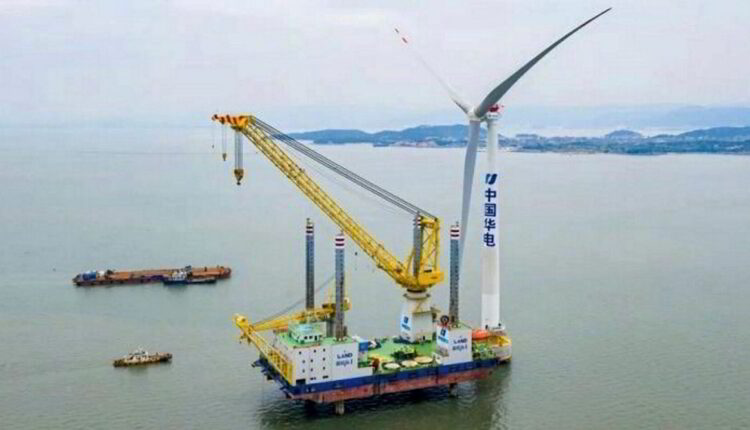 The total installed capacity is 200,000 kilowatts. It was approved on May 2, 2017 and construction began on August 21, 2018. The Fujian Energy Group Shicheng project is located in the northern waters of the Wutou Peninsula in the southeast of Xinghua Bay, Putian, with a total installed capacity of 200,000 kilowatts. It was approved on October 22, 2018 and construction began on November 30, 2018.

In the construction of the project, Sanchuan Company has taken a number of measures to overcome the adverse effects of the epidemic and set a number of domestic records. The fan foundation construction has set a domestic offshore wind power type III single-column maximum diameter rock-inlaid pile construction record. In July 2020, the single ship completed the installation of seven 7MW fans, setting a record for hoisting large MW wind turbines in China that year. The construction speed of the project is at the leading level in Fujian Province.

In June 2019, the first batch of fans of the two projects were put into production at the same time, and it only took eight months for the Fujian Energy Group Shicheng project from approval to the first typhoon power unit to be put into production. At present, the two projects have completed all the engineering construction tasks, and Sanchuan Company has become the first offshore wind power company in Fujian Province to build a one-time installed capacity of 400,000 kilowatts.

According to the design, the annual feed-in power of the two projects during the operation period is about 1.27 billion kilowatt-hours, which can save about 401,000 tons of standard coal per year, reduce carbon dioxide by about 801,000 tons, and reduce various air pollutants such as sulfur dioxide and nitrogen oxides by about 11,600 tons.

It is understood that Sanchuan Company’s offshore wind power project is the leading project in the transformation and development of Fujian Energy Group.

Back to Siemens news, The offshore wind power hydrogen production solution project adopts a modular approach, which not only ensures reliable and efficient operation settings, but also realizes large-scale expansion. Siemens Energy will develop a brand-new electrolytic product, which can cope with the harsh environment at sea and perfectly synchronize with the fan, setting a new benchmark for the green hydrogen production industry. Christian Bruch said that as the project progressed, areas rich in offshore wind energy can also fully tap the economic potential of hydrogen energy, which is also an important example of the reduction of the economic carbon footprint by both sides by storing and transporting wind energy.

Work together to deliver! is one of COP26 Goals which sure is important for earth, conference is soon and everyone need results.