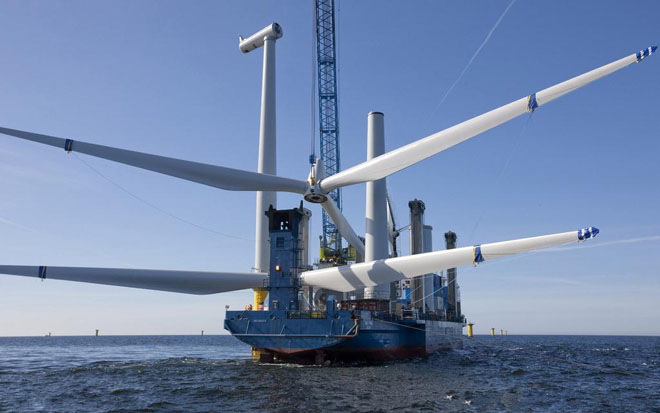 USA Largest Offshore Wind Farm: A few days ago, Spanish power giant Iberdrola accused the US government of “excessively” restricting the use of imported materials and equipment, saying that such “protectionism” hurts others and hurts itself and will hurt the country renewable energy industry.

It is understood that Avangrid Renewables, the USA Largest Offshore Wind Farm development subsidiary of Iberdrola, owns half of the shares of Vineyard Wind, the largest offshore wind farm in the United States, and serves as the operator. The company said that the construction of the Vineyard Wind wind farm is in trouble because the United States is strictly controlling the use of “foreign products”, which not only increases a lot of ineffective operation and construction expenditures, but also brings fatal damage to the project.

Bill White, the USA Largest Offshore Wind Farm leader, said that the United States “excessively” restricts the use of imported materials and equipment, which will jeopardize the development of the US offshore wind power industry, which relies on European-made equipment. “Excessive rejection of laymen will only hurt others and ourselves in the end. The development of the’Made in America’ supply chain will take time, but there is no waiting time for a large number of renewable energy projects in this country.”

In mid-September, the U.S. government announced a proposed green tax credit for infrastructure worth 3.5 trillion U.S. dollars, which put forward some rigid indicators that require clean energy materials and equipment to come from the United States, which indirectly leads to the impact of renewable energy projects. Construction costs and operating expenses have increased, and have delayed the construction of a large number of projects.

Up to now, the USA offshore wind power industry has basically relied on more mature wind turbines manufactured overseas. For example, the wind turbines of the Vineyard Wind wind farm are all manufactured in France. The US Department of Energy pointed out that the main components, installation vessels and engineering design of wind power projects on the Atlantic coast are basically heavily dependent on overseas supply chains.

Bill White said: “According to the proposed plan, unless the US-made wind turbines are used, it is impossible to invest in offshore wind power projects. Vineyard Wind will basically be’dead.’ The United States needs to restrain protectionism, otherwise it will become A stumbling block for the development of the renewable energy industry.”

It is reported that the Vineyard Wind wind farm on the east coast of the United States started planning in 2009. It was approved by the US government in May this year. It is the country’s first utility-scale offshore wind farm. It will have 62 wind turbines and a total installed capacity of 800,000 kilowatts. , Can meet the electricity demand of 400,000 households.

Although the northeastern United States is building a manufacturing base for renewable energy products, it is too late for a large number of projects under construction such as Vineyard Wind. The oil price network pointed out that the controversial Jones Act has also dragged down the construction of offshore wind farms in the United States to a certain extent.

The Jones Act is a concentrated expression of native protectionism in the United States. In recent years, it has been increasingly questioned by the international community, but the United States still adheres to this outdated law. According to the Jones Act, foreign ships are not allowed to perform shipping work and deliveries in American ports. As the United States does not currently have offshore wind power installation vessels that meet the legal requirements, this makes it impossible for Vineyard Wind wind farms to use high-efficiency transportation and installation. The most advanced foreign wind power installation ship. (USA Largest Offshore Wind Farm)

Bill White admitted that this obviously increases installation and transportation costs, while reducing installation efficiency. According to data from the Clarkson Institute, the recent sharp rise in the prices of raw materials such as steel and copper, coupled with the simultaneous increase in maritime transportation costs, has further increased the cost of offshore wind power project development.

Since the beginning of this year, the global supply of wind turbine installation vessels has continued to exceed demand, and US policies have greatly restricted the entry of foreign ship products into the United States and inhibited the development of the country’s wind power industry.

Jamie MacDonald, director of operations at Xodus Group, an energy consulting company, said that although the United States is stepping up efforts to build a manufacturing base for renewable energy products, most of the renewable energy projects under construction or even planned cannot afford this time.