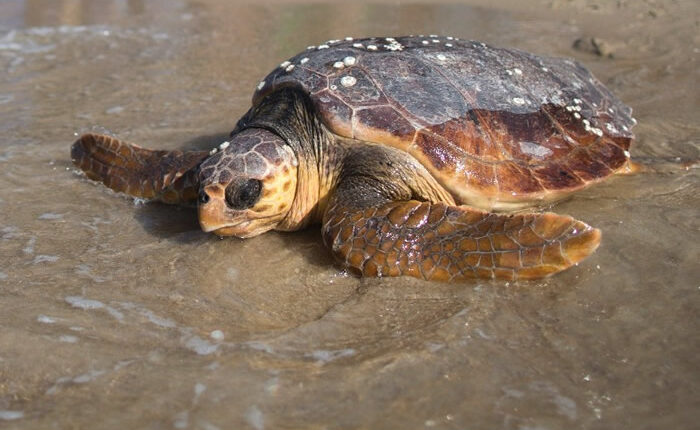 Endangered Turtles, A dead young turtle with a large amount of pumice was found on the beach in central Okinawa, Japan.

Killing Endangered Turtles : This is the first time that a large number of volcanic rocks have been found in Japanese wild turtles.

Due to the undersea volcanic eruption of Ogasawahara Islands in Japan, a large number of magma-condensed pumice floated in the waters of Okinawa Prefecture and other parts of Japan.

The turtle found this time is an endangered species of green turtle, a young turtle born this year.

According to CT images, a large number of pumice was found in the intestines and other parts of the baby turtle. Experts believe that turtles are used to floating near the sea and accidentally eat stones.

Japanese animal doctor Kawazuho pointed out: “As long as the pumice is not removed, there will be turtles eating by mistake in the future. I hope it can be protected as soon as possible as Endangered Turtles.”

Japanese media previously reported that in Kitahishima, located in Okinawa, Japan, a large amount of pumice has filled the nearby coast.

In addition, similar abnormalities have occurred near Hijie Island in Kagoshima Prefecture, Japan. Looking around, the whole sea area has turned gray, and the fishing and sightseeing industries in Okinawa have been seriously damaged.