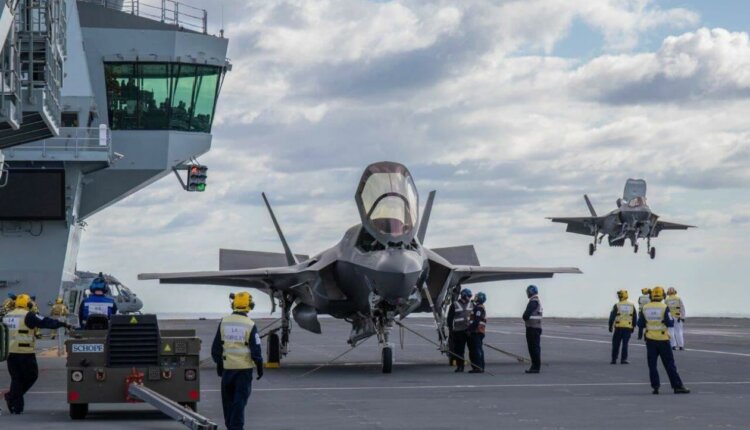 British nuclear submarines are racing their Russian counterparts to reach the wreckage of the world’s most expensive F-35 jet, in the waters of the Mediterranean Sea in which F-35B crashed.

The price of the F-35 stealth fighter is more than 130 million US dollars, and it is considered the most advanced in the world.

The plane plunged into the Mediterranean, shortly after take-off, as part of a regular exercise from the aircraft carrier “Queen Elizabeth”, and the pilot managed to escape during the crash of the fighter.

The crash was one of eight jet fighters on board the aircraft carrier, as well as 10 American fighter jets.

The search for the wreckage of the American-made plane drew Russia’s attention, especially since access to the wreckage will enable Russia to learn the secrets of this fighter, such as secret radar and sensors, which enable it to fly in the air of hostile countries at supersonic speeds.

He revealed that Russian warplanes were tracking the movements of the British aircraft carrier during its return from its 7-month journey.

The British defense minister refused to answer whether there were Russian submarines tracking the wreck as well.

It is believed that this is the first time that an F-35 fighter jet has fallen into the waters of the Mediterranean Sea.

It is likely that the cause of the crash was a technical failure, and the British Ministry of Defense said that no hostile action led to the crash.

British media say that there is a joint team from Britain and America searching for the wreckage of the plane that crashed on Wednesday, and divers, metal submarines and huge inflatable bags, which can be used to lift the wreckage from the bottom of the sea, participate in the operation.

A map showed that the plane crashed in an area near the coast of Egypt.

The British aircraft carrier had moved to the Far East, attracting the attention of both Russia and China, before sailing towards the Mediterranean.

Searches in the region are accelerating so that rival powers such as Russia and China cannot access the wreck.

The report mentioned that the British aircraft carrier was “sufferly hit” and one of the 8 British F-35B fighters on board crashed into the Mediterranean Sea, which is the most expensive, mysterious and complex aircraft in the British arsenal. At present, the fighter plane that fell into the sea is still under the sea, and the British army is carrying out salvage operations.

According to the report, Wallace revealed that Russia has shown interest in the aircraft carrier Queen Elizabeth and the F-35 fighter jets it carries. When the aircraft carrier formation crossed the Mediterranean Sea in June this year, Russia sent a number of fighter planes to fly fast and low-flying near it.

“This is the same as what we did to their ships,” Wallace added. We pay close attention to each other, which is also the way we want to avoid misunderstanding and misjudgment.

According to the report, when asked about the task of salvaging the crashed plane, the defense minister said: “The salvage operation is in progress.” I’m glad that our pilot is safe and sound. We will investigate what happened.

Wallace also said that despite the crash, all British F-35 fighter jets continued their combat and flight training.