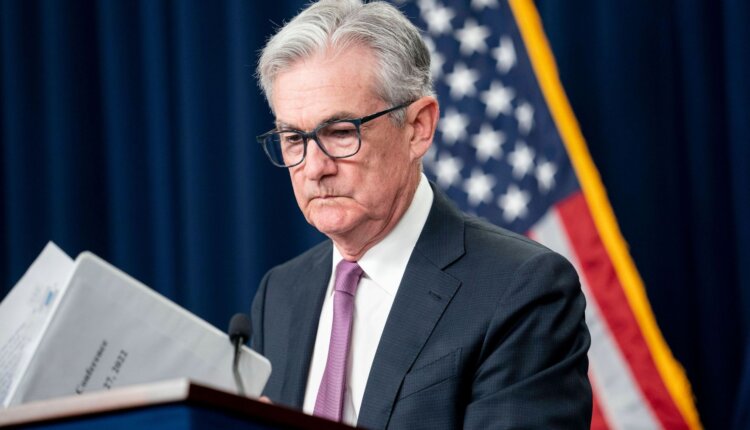 Investors are getting more and more nervous the day before the top central bankers Fed decision interest rate conference in Jackson Hole, America.

There were also no signs of easing on the subject of the energy crisis on Wednesday, and it also remained below par Euro under Print.

The Dax lost 0.3 percent to 13,157 points in the morning. The EuroStoxx50 was 0.1 percent weaker at 3,649 points.,The statements by Fed boss Jerome Powell and other top central bankers could shape the development of the financial markets for the next few weeks, said market strategist Christian Henke from the trading company IG.

“Above all Investors are awaiting answers to the question of what progress has been made in fighting inflation.” Economists currently expect the Fed to hike rates by 50 basis points at the September meeting.

Traders also think more is possible and are worried that aggressive steps will have a braking effect on the already fragile economy.

On the foreign exchange market, investors responded to clear interest rate signals from the Fed boss Powell at his speech on Friday and bought US dollars. After slipping to a 20-year low of just under $0.990, the euro remains under pressure.

At $0.9940, the common currency is worth less than the US currency and was down 0.3 percent on Wednesday. said Jürgen Molnar, capital markets strategist at RoboMarkets. “But there is always the possibility that the euro will fall even more sharply against the dollar.” That should fuel economic concerns on the stock exchanges.

Because not only imports are likely to become more expensive, but the already rising energy prices would be increased again by a weak euro, stated Molnar.

The situation on the energy markets remains tense. Intensified concerns about the gas supply in Western Europe as a result of the supply disruption via Nord Stream 1 announced by Gazprom continued to drive up gas prices. The European future rose by 2.7 percent to EUR 267 per megawatt hour. In just over two months, the price has tripled.

According to Gazprom, pipeline operations will be interrupted for maintenance work from August 31 to September 2. Brent crude oil rose 1.3 percent to $101.55 per barrel courses according to traders. Statements by the Saudi energy minister were interpreted in such a way that the oil cartel might want to counteract a resumption of Iranian oil production.

The dynamics of the price increase decreased more than expected in the USA in July: Compared to the previous year, the US inflation rate was still 8.5 percent. In June, inflation in the largest economy in the world was still 9.1 percent – the highest level in more than 40 years. For “CNBC” presenter Jim Cramer, it is clear: “This is what ‘peak inflation’ looks like.”

No all-clear for companies, but good prospects for stocks

In his program Mad Money, Jim Cramer warned that the economy is not yet off the hook and could still slip into recession, even if the price increase is now losing speed. At the same time, however, he was convinced that the peak of inflation now reached could help raise stock prices even during an economic downturn. “Some companies will be absolutely affected by the impending recession, but others will see their stocks soaring because they are worth more in an environment where inflation may finally be under control,” says the stock market expert.

The fact that the peak of inflation has been reached is simply “great for stock valuations,” Cramer continues. As proof of this, he also used the price development of the major US indices, which after the publication of the recent US consumer prices on the 10th. August had all increased significantly. “Today’s movement looks like peak inflation looks like, and that can be nirvana for many different stocks,” raved the “CNBC” host. In Buddhism, “Nirvana” means a state of perfection that roughly corresponds to the paradise to be desired.

According to Cramer, recently unpopular stocks such as fast-growing tech companies, financial assets or cyclical consumer goods could now get up the rise again. “If you are active in the stock market and choose stocks, this is heaven,” says Cramer in his program. “This means you can buy everything from Microsoft to Wells Fargo to Target and even Disney,” listed the Mad Money presenter.

Inflation development for Cramer no surprise

Cramer, however, was not surprised that US inflation is likely to have peaked. “The stock market […] has seen the peak of inflation come absolutely,” says the expert. “I think you had to be deliberately dull to miss this, as commodity prices collapsed some time ago,” Cramer added. Now, however, the turnaround in inflation is “undeniable” – and thus also the good prospects for stocks.

Cost inflation and supply chain problems resulted in a €13 million net loss for the Belgian graphics group. ING analysts see a “lack of quality” in the results.

That points to a “collapse in the profitability of the group’s supposedly more stable healthcare activities.” Like the US department store chain Macy’s, Nordstrom is feeling the effects of the weakening purchasing power of consumers and has to grant discounts to reduce its high inventories. The papers fell 13 percent in after-hours trading. Hugo Boss lost up to 1.7 percent in the wake. Zalando dropped 2.4 percent.

The Council of the European Central Bank (ECB) raised its interest on the 21st. July 2022 increased more than expected, but do not want to signal a higher endpoint of its interest rate increase cycle.

In the now published minutes of the deliberations of the 20th and 21st July it says: “It was considered important to emphasize that the increase by 50 basis points does not mean a shift in the interest rate path upwards, but rather a front loading of the normalization of politics.”

Contrary to its own forward guidance, the Governing Council had increased its interest rates by 50 basis points in July and at the same time collected the guidance, according to which an interest rate step of more than 25 basis points could be justified in September.

As can be seen from the protocol, the panel considered the large interest rate step due to increased inflation risks to be necessary. The majority of the members of the Council were willing to act against the forward guidance issued in the previous month. In order to better follow the principles of data dependence and optionality, the Council also decided not to issue forward guidance in the future.

The new program for the purchase of government bonds, Transmission Protection Instrument (TPI), was adopted unanimously. However, it should only be activated if necessary.

A better German GDP and the Ifo index had a supportive effect: GDP for the second quarter was revised marginally upwards and showed a delicate growth of 0.1 percent instead of the original stagnation. GDP was also revised upwards in the USA, it was 0.6 percent lower compared to the previous quarter than initially reported.

However, the focus of professional investors was only on the central banker interest rate meeting in Jackson Hole: The speech by US Federal Reserve Chairman Jerome Powell on Friday afternoon with his future interest rate policy was eagerly awaited. However, an increase in price data within the US GDP (Deflator) to plus 8.9 percent made traders fear that Powell would definitely express himself in a false way.

Meanwhile, in Europe, the price of gas jumped above the 300 euro mark and pointed to a cost shock for consumers in winter. In addition, state aid will hardly be possible anymore: In Germany, the Federal Audit Office warned that the state would lose its ability to act due to financial overburdening.

Investors should therefore not let too much joy with the Ifo business climate arise. At 88.5 points, it was higher than feared in August, but “this does little change the fact that the expectation component has a devastating outlook for the coming autumn or There are winter months,” emphasized LBBW economist Elmar Völker. The recent price increases in the gas and electricity market are not yet fully covered.

And Commerzbank chief economist Jörg Krämer mainly suspected a relaxation in the material shortages behind the better Ifo. There is nothing wrong with a recession looming: “Inflation is likely to come close to the 10 percent mark in the fourth quarter driven by exploding gas prices.” The resulting loss of purchasing power is massive.

Jackson Hole was the focus internationally: The annual Central Bankers interest rate Symposium takes place there from Thursday to Saturday. Since 1982, representatives of large central banks have been meeting there at the invitation of the US Federal Reserve. ECB head Christine Lagarde is not there.

In the speech of the head of the Fed, Ulrich Stephan, investment strategist of Deutsche Bank, assumes that he will explain how the inflation target of 2 percent is to be achieved again. If Powell does not indicate that interest rate increases will be lower in the future than in the previous two meetings, the euro should continue to come under pressure. In the evening, he hardly showed any change with 0.9966 compared to the dollar.