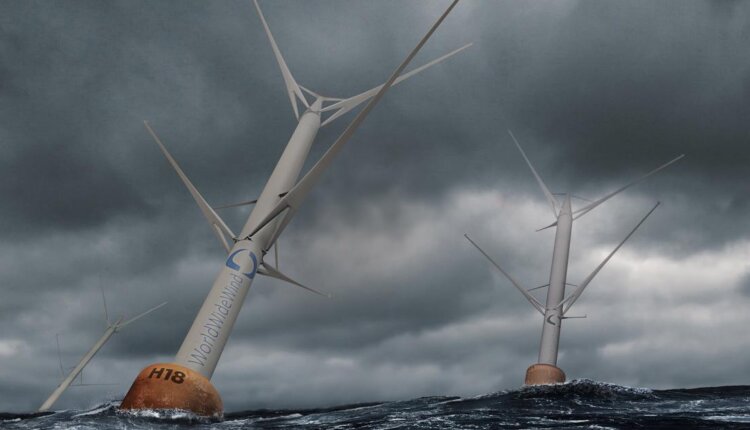 Norwegian wind turbine manufacturer World Wide Wind has developed a vertical Floating wind turbine. It is intended for use in the sea and could be more productive than conventional systems.

The so-called Contra-Rotating Vertical Turbines (CRVT) each consist of 2 rotors. Compared to conventional systems, they can be installed much closer together.

The upper rotor is attached to a so-called shaft, which runs inside the mast. The lower one is firmly coupled to the mast. The two main components rotate in opposite directions. This design is intended to increase the relative rotational speed and at the same time the electricity yield.

Electricity yield can be increased

Generator, Floating wind turbine and ballast are located at the lower end of the plant. The generator also serves as a stabilizer and counterweight.

According to the manufacturer, the Floating wind turbine system also does not require a gearbox – installation and maintenance is therefore easier. In addition, a vertical turbine does not turn after the wind like conventional turbines, but can be driven from all sides.

A CRVT can be built up to 400 meters high. So it would deliver an output of 40 megawatts. The system SG 14-222D from Siemens Gamesa, for example, is one of the most powerful systems currently available. It has a rotor diameter of 222 meters and the shaft is 252 meters high. Comparatively, it only manages 14 megawatts, as Golem reports.

However, the new CRVT is still in its infancy, a first prototype is to be completed by 2026. It should initially deliver an output of 3 megawatts.

The design of offshore wind turbines, World Wide Wind Technology in Norway, seems to have quite unique insights. As it enters the sea, the disadvantages of the wind turbine (HAWT) based on the traditional horizontal axis are becoming more and more obvious.

It is reported that traditional HAWT wind turbines need to use many heavy components – including transmission systems, gearboxes, generators, and huge blades – and need to fix them to the top of a long rod.

That’s why the challenge of installing traditional wind turbines on offshore Floating wind turbine platforms is much more difficult. In view of this, some engineers and operators began to focus on the so-called vertical (VAWT) wind turbine scheme.

As shown in the figure, VAWT can extend each set of blades upward and set the rest of the heavy head at the bottom, so the device tends to be naturally upright.

When accepting wind energy from all directions, it does not need to turn to the wind, so it can reduce the heavy gear parts on the HAWT scheme.

In the same breeze, the efficiency of VAWT schemes is usually much lower than that of three-blaleaf HAWT wind turbines.

But on the other hand, we can also put it closer without reducing performance – which means that VAWT can emit more power on the same ocean.

The novel Floating wind turbine VAWT scheme proposed by World Wide Wind is designed for large-scale scalability on the sea.

Interestingly, the top turbine installed on the central blade can rotate in one direction. Another turbine near the bottom of the tower can move in different directions.

In a sense, World Wide Wind “merged” two VAWT wind turbines into one – one of which is fixed to the “rotor” and the other on the “stator”.

Compared with static stators, the rotation speed of the rotating vertical turbine (CRVT) has been relatively doubled, and the power generation is more significant.

At the same time, this design places heavier and frequently maintained parts at the bottom of the main structure (under the buoy), near the tie and cable connections.

But for ordinary people, it may not be very suitable for its “incomplete upright” design, because the huge wind tower will tilt with the wind.

In response, World Wide Wind explained that the blades are designed to sweep through the conical area and help reduce the turbulent wake at the lower part of each Floating wind turbine tower, so that operators can deploy more such devices to designated locations.

Thanks to the tilt ability, the company’s VAWT wind turbines can also better withstand sudden and violent wind gusts and destructive vibrations.

However, World Wide Wind claims that its VAWT scheme can be expanded more easily – up to a staggering height of 400 meters and a stand-alone nominal maximum of 40 megawatts.

A representative of World Wide Wind said in an interview with Recharge that its estimated cost of flattened energy (LCoE) is less than $50 per megawatt – less than half of the expectations of the 2027 offshore wind power project set by the U.S. Department of Energy.