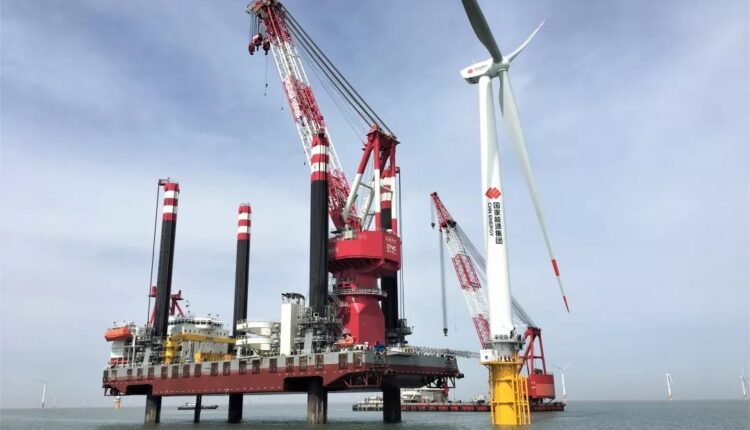 The new energy power generation giant with business at home and abroad will appear in front of the majority of mainland investors as Carbon Neutral New Energy Giants, the meeting will vote on the previously announced draft of Longyuan Power Group Co., Ltd. (hereinafter referred to as Longyuan Power) to absorb and merge ST level energy. After the completion of this merger, ST Pingneng, which currently has a large loss, will terminate its listing; as a domestic wind power leader, Longyuan Power will apply for listing on the Shenzhen Stock Exchange for circulation financing.

In the past two years, countries around the world have formulated energy transformation strategies in accordance with the domestic goals of “carbon neutrality”, put forward higher energy efficiency requirements, and promoted the development of renewable energy and the green and low-carbon transformation of the economy.

After the Biden administration came to power in 2021, it reiterated that it would be 100% clean New Energy electricity by 2035 and 100% decarbonization in the power energy system. SEIA, the American Photovoltaic Industry Association, believes that hundreds of gigawatts of solar energy will be added to solar power stations, and the United States needs to reach an annual average of 9 in the next decade. New solar power generation of 0GW.

On July 16, 2021, China’s carbon emission trading officially opened, becoming a milestone in the field of carbon neutrality. Previously, China’s Ministry of Ecology and Environment said that when the market was launched, it would become the largest market covering greenhouse gas emissions in the world. Industry insiders believe that the creation of the market will echo the country’s policy goals of optimizing the industrial structure and energy structure and achieving carbon neutrality.

Under this trend, wind power, photovoltaic and other businesses mainly based on renewable energy have naturally become high-business tracks, leading a carbon neutralization wave. Longyuan Power is mainly engaged in the design, development, construction, management and operation of wind farms. It is the earliest professional company in China to develop wind power and is the benchmark of the wind power operation industry. Since 2015, it has maintained the status of the world’s largest wind power operator. By 2020, it has become a large-scale comprehensive power generation group mainly engaged in the development and operation of new energy, with more than 300 wind power plants, and layout of photovoltaic, biomass, tidal, geothermal and thermal power projects.

In recent years, Longyuan Power has taken advantage of the east wind of the Belt and Road Initiative and the opportunity of green and low-carbon economic transformation to enclose the land and layout of the world. On June 30, 2021, Longyuan Electric South Africa announced the signing of the largest carbon trading contract for the group’s overseas projects, with a transaction volume of 630,000 tons and a transaction value of 1.1 million US dollars, which reached the highest transaction price in the company’s previous transactions.

The German-A Wind Power Project was signed this time, which is the only large-scale renewable energy project registered in South Africa according to voluntary emission reduction standards. According to current statistics, the geographical distribution of Longyuan Power’s overseas business is wide across the world: it involves Canada, South Africa, Ukraine and other countries, covering all continents.

On June 25 2021, Longyuan Electric Power Zhejiang Company announced that it had signed a new energy development strategy cooperation agreement with the Dinghai District Government of Zhoushan, Zhejiang Province, intending to develop and build distributed and centralized photovoltaic projects and decentralized wind power projects throughout the Dinghai region. Longyuan Electric Power Zhejiang Company will establish a new energy development agency in Dinghai District through cooperation to accelerate the development of new energy projects in the whole county and district.

Mid-year statistics Longyuan data is good. It is the general trend to attract and list flat energy.

During the 14th Five-Year Plan period, the company plans to add 30GW, including 11GW for wind power and 19GW for photovoltaic power. If this transaction goes smoothly, the surviving company Longyuan Power will expand its business scale. The installed capacity of wind power alone will reach 25GW, the market competitiveness will be improved, and its profitability will be strengthened.

Benefiting from the global development trend and breakthroughs in related technologies, in recent years, domestic and foreign counterparts in the power generation industry have also kept up with the trend and continuously expanded crazily in the field of new energy, making the competition pattern of the industry more intense. Industry insiders generally believe that according to the semi-annual performance forecast of ST Pingneng in 2021, the company’s losses have expanded compared with the same period last year; and as of June 30, Longyuan Power has completed a cumulative annual power generation of 33.106 billion kilowatt-hours, an increase of 6.181 billion kilowatt-hours year-on-year, setting a record high – this kind of business data.

The comparison increases investors’ expectations for the possibility of the adoption of the absorption merger and the growth after adoption. At present, Longyuan Power is only listed in Hong Kong stocks. If it is supported by the domestic capital market in today’s wind field and photovoltaic construction in today’s industry, Longyuan Power will further consolidate its wind power hegemony position, and will be in a more favorable position in competition with peers, constantly lead the development and technological progress of the industry, and greatly Improve the valuation of Longyuan Power. Therefore, the interests of shareholders who currently hold ST level energy can also be maximized.

Net Zero by 2050 A Roadmap for the Global Energy Sector