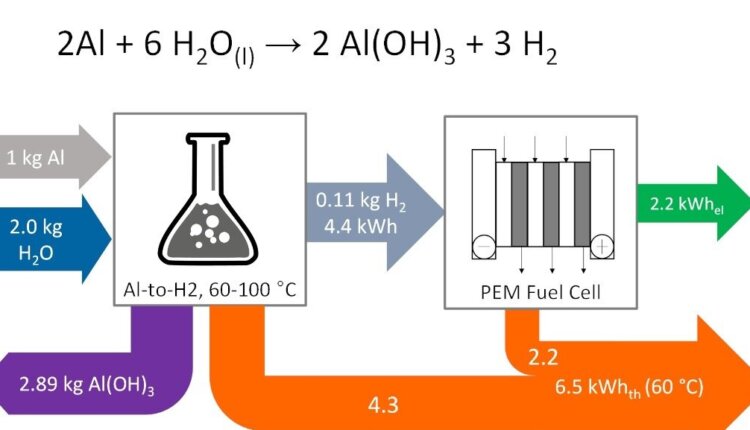 It is based on preliminary projects by the SPF Institute for Solar Technology at the OST – Ostschweizer Fachhochschule and the project partners IceTec and Arctic from Iceland.

Use hydrogen from aluminum in fuel cells

The Icelandic partners have developed a process to obtain aluminum from aluminum oxide in a CO2-neutral manner. They rely on an electrolytic process, powered by renewable energies. There have already been a number of research and development projects for this technology.

Aluminum as a chemical energy store could hold the energy for months or even years. With an energy density of 15 MWh per cubic meter, it contains a good 70 percent more energy than heating oil in terms of volume. Initial model calculations also suggest that this type of energy storage can be significantly cheaper than power-to-gas or synthetic fuels.

A blog post on the project website puts the storage costs at 7 cents per kWh. In addition, the technology is easily scalable from a few kilowatts to several megawatts of power.

The EU research program Horizon and the Swiss State Secretariat for Education, Research and Innovation (SERI) are funding the REVEAL project with a total of 3.6 million euros. The main focus of the project is to close the material and energy cycle. The aluminum should be able to be loaded and unloaded as often as possible.

According to the first concept, charging with energy will be a central process. If you want to use the stored energy, you would have the aluminum delivered and would give back aluminum hydroxide. In addition to these technical aspects, costs and the environmental impact of the project are also to be examined. The research project will run until 2026.

From the theory that electricity in a superconducting circuit can flow indefinitely without adding further energy from the outside, superconducting magnetic energy storage devices (SMES) were developed. For this purpose, a direct current flows through a coil consisting of superconducting material from a conductive material, whereby a magnetic field is generated in which the energy is stored.

At the end of the load, the power supply is interrupted. At the same time, a switch made of also superconducting material is actuated, which separates the coil from the inverter. To discharge the stored energy, the circuit is reconnected to the inverter so that alternating current is generated from the direct current.

A distinction is made between low-temperature and high-temperature superconductors, the former are usually made of copper, the latter of more expensive silver.

With terms of battery storage, it is important to know that they are currently mostly used in smaller power systems, for example in one- and two-family houses. Since the number of charging cycles possible with them is still quite small, the total cost of these energy storage devices is still relatively high.

In addition, there is the fact that due to the frequent loading and unloading of the batteries, their storage capacity is constantly reduced. This, in turn, significantly limits the possibilities of their use.

However, battery storage is also increasingly being used “in large” A large number of batteries are combined, which can then absorb electricity from the low-voltage grid and release it again specifically if necessary.

Such concepts are also called district storage facilities, among others. The energy storage system then functions as a regional buffer and can also often be used for the further marketing of solar power of regional photovoltaic systems.

“Cross-sector” describes the linking of different energy sectors, such as B. the electricity with the gas or heat sector. Energy storage by means of such plants can take place without and with final re-energence and re-feed-in. The so-called “Power-to-X” methods will not only contribute to the market and system integration of renewable energies in the future, but may also reduce the transport requirements in the electricity grid by moving to the gas grid or to the existing supply infrastructure for liquid fuel.

“Energy storage” in the category Power-to-gas convert water into hydrogen by means of electricity (process: electrolysis), sometimes in a subsequent step (methaneization stage) also into methane. Both mentioned gases can be fed into the existing natural gas network and its gas storage and stored in it. Behind the process is the fact that thus “renewable” produced methane gas has identical properties and an identical structure as fossil natural gas.

The ultimate storage effect of power-to-gas storage results from the chemical conversion of green electricity into gas, which can be stored in the long term and almost losslessly. Both gas tanks and the gas network itself are used as energy storage devices.

Ultimately, the process can also be reversed after storage and electricity can be generated by burning the gas as needed and at the place of consumption (gas-to-power). This can then happen both in smaller mini CHP plants for single-family homes, in larger CHP plants for industry and commerce, in fuel cells as well as in gas-fired power plants.

In the event that there is a surplus in the electricity grid thanks to renewables (overpower), electricity is converted into heat according to power-to-heat. This can be done with appropriate power-to-heat systems (PtH systems). The systems can be realized with comparatively little effort and low investment costs and store the heat in heat storage systems.

On a large scale, e.g. Electrode boilers operated, which convert electricity directly into heat, which can then be fed into local and district heating networks. On a smaller scale, the electricity can also be supplied to electric heat pumps. These then efficiently convert the electricity into heat via a circular process, which then delays by a few hours.

The hydrogen generated by electrolysis from renewable surplus energy can be stored in liquid fuels by means of chemical conversion (“power-to-liquid” (P2L)) analogous to power-to-gas technology. Exemplary processes are the production of methanol, formic acid or higher-quality synthetic fuels from hydrogen as well as the reversible storage of hydrogen in liquid hydrogen carrier materials (LOHC).

Through the P2L process, renewable energy can be stored in liquid fuel and stored or distributed in the existing infrastructure for liquid fuels. A re-current in the sense of the functionality of a power storage device is also possible.

Sensitive storage: heat storage due to temperature change of the storage medium)

Deferred storage: Heat storage mainly through the use of phase changes from solid to liquid

Thermochemical heat accumulators: heat storage in the form of a reversible thermo-chemical reaction

In addition, heat accumulators are further differentiated according to the following criteria:

store heat in the phase change of the storage medium. On a small scale, PCM memory is already used in many applications and is commercially available.

Salt, which has a high energy density, is used as a storage medium in SaltX plants. The energy is chemically stored by heating damp salt through a drying process and thus separating it from the water.