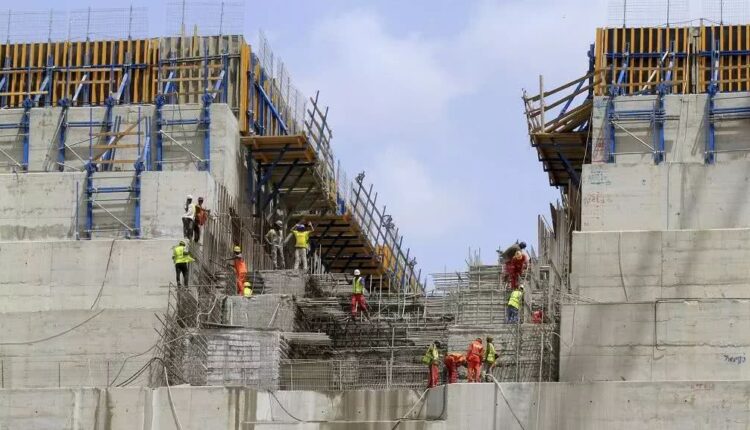 Abdel-Aty said that the ministry is working on all possibilities related to the Renaissance Dam, including the possibility of GERD Collapse (Grand Ethiopian Renaissance Dam), by establishing an infrastructure around the High Dam in Aswan that can absorb large quantities of water that reach Lake Nasser in a short and unspecified time.

Abdel-Aty added that the structure beside possibility of GERD Collapse also includes the failure of water to reach Lake Nasser on time, so we, as a ministry, are preparing for all risks.

Abdel-Aty reviewed the many positive effects of the major projects that Egypt is implementing in the field of water, pointing out that upon completion of the implementation of these projects, Egypt will be one of the largest countries in the world in water reuse.

He explained that the water sector in Egypt faces many challenges, foremost of which are population growth and climatic changes, in addition to the limited water resources of Egypt, as the renewable water resources are limited in quantities, most of which come from the waters of the Nile River, in addition to very limited quantities of rainwater and deep groundwater in deserts with a total of 60 billion meters.

As well as the extreme and unprecedented weather phenomena that Egypt is witnessing, such as heavy rains that hit separate parts of the country, in addition to the rising sea level and the dangerous negative impact it has on cities and coastal areas.

He explained that these challenges require strenuous efforts to confront them, whether at the societal level through citizens’ awareness of the importance of rationalizing water and preserving it from all forms of waste and pollution, or at the governmental level through many major projects that the state is implementing or through legislative development, where it has Egypt is preparing a strategy for water resources until 2050, and developing a national plan for water resources until 2037 at a cost of up to 50 billion dollars, which is expected to increase to 100 billion dollars. optimum water.

Abdel-Aty reviewed the ministry’s efforts in implementing several major projects, such as the National Canal Rehabilitation Project, which aims to improve the process of water management and distribution, and resolve farmers’ complaints, other than the important environmental, cultural and economic returns, and irrigation projects that aim to achieve the full rehabilitation of the waterway network, and the transformation project from flood irrigation.

To modern irrigation systems by encouraging farmers to make this transformation, and organizing dozens of conferences in the governorates to present the advantages of modern irrigation to farmers, such as rationalizing water consumption, increasing crop yield by up to 30-40%, decreasing fertilizer consumption by 60%, and lowering labor and energy costs, and this is reflected on Increasing farmers’ profitability, in addition to their participation in achieving the national goal of rationalizing water use.

He explained that canal pollution has significant environmental impacts on health, the environment and people, so the government has started implementing the canal lining project, which is the largest project in the world to rehabilitate canals in the modern era, as 20 thousand kilometers of canals are lined for the first time in the history of Egypt.

It is a project that achieves justice in the distribution of water, and contributed to raising the efficiency of lands in the areas where the canals were lined, as the price of the land around the lined canals increased by 30 to 40%, because the land easily and fairly accesses those lands and the weeds inside the canals have been eliminated And around them, saving the cost of cleaning the canals, and complaints about the lack of water in those areas reduced to zero, which is parallel to the initiative of a decent life launched by President Abdel Fattah Al-Sisi.

He stressed that the ministry is conducting a community dialogue to implement the national project for the development of irrigation, where farmers are listened to and discussed with them, and they all confirmed that the lands in which irrigation was developed from drip or sprinkler immersion, production inputs were provided by 50%, and therefore he has the ability to live a decent life.

He revealed that Egypt is planning to become the largest country in the world that reuses water, at a rate of 40%, after the completion of the project to reuse water in the western region to reuse it in irrigating the lands of the new delta with the eastern region, which has been reusing the agricultural drainage water that was thrown into the sea to reach Sinai It was a problem that was turned into an opportunity, and it was the pollution of the Mediterranean and it was a crisis for our neighbors, pointing out that Egypt reuses 33% of the water.

He stressed that the two projects work as a water curtain that prevents the salty waters of the Mediterranean and Red Sea from reaching the Nile River delta, which protects the aquifer in the delta.

He pointed out that the Ministry of Water Resources and Irrigation controls every water point through the telemetric network located on the Nile River, Rayahat and the Great Canals, and every water point that falls through rain is preserved and the underground reservoir is recharged through dams in mountainous areas, which is something that benefits from it. Bedouins in agriculture, irrigation and domestic uses.

He pointed out that the ministry is, during the current stage, implementing an ambitious plan to control underground wells remotely, which maintains their sustainability

Softbank latest fail, Japan former richest man: The company is in a “blizzard” and will continue to invest in China 2021